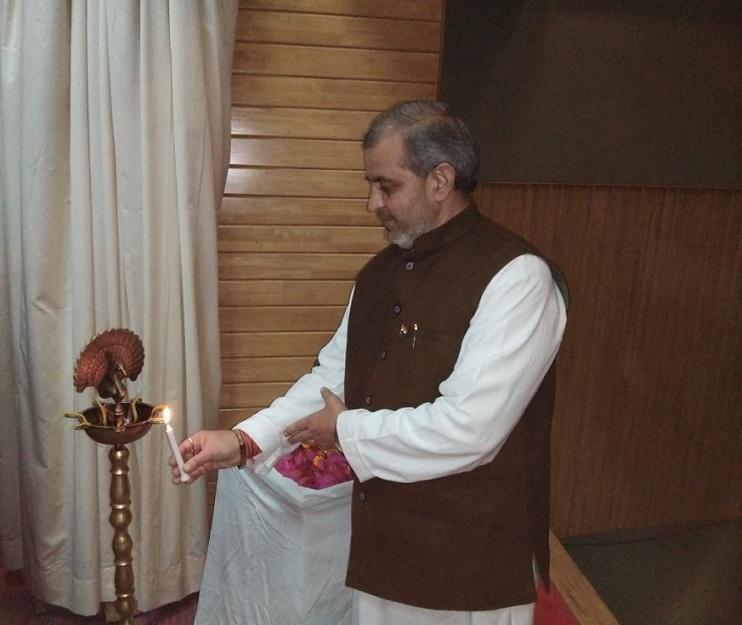 Zerone is not just a word or slogan or jargon but a Philosophy which tells that it does not matter if one starts at zero but no one can stop you from becoming number one. The Chemical engineering department of Banasthali came into operation in 2008 and Innovative Chemical Engineers - ICE Club has been organizing various events round the year which includes ZERONE (Discovering the Undiscovered) a three day techno cultural festival considered one of the most popular ones in the campus. The concept to commissioning of this event brings the very best of core branch knowledge, interdisciplinary approach, team work, ability to meet deadlines, creativity, social connect and sociability among the students organizing the same. ZERONE 2019 had a grand inauguration on 06 Feb 2019 at the Gyan Mandir Auditorium of Banasthali with the lighting of the ceremonial lamp. In his inimitable style, the chief guest for Zerone 2K19, highly acclaimed Kavi Yogendra Sharma http://www.kaviyogendra.com/ of Bhilwara gave a new interpretation to ZERONE stating that Pandit Hiralal Sastriji and Padma Bhushan Ratan Sastri were at point zero when their beloved daughter Shantabai was dead at a very young age but still took a mission with passion to raise Banasthali as a globally acclaimed Number One University for women education. Sri Yogendra Sharma holds a Post graduate in Commerce and Hindi Literature with Gold Medal from Jain Vishva Bharti University. He is one of the most sought after speakers in various universities across India and is a name to reckon with in various Kavi sammelans.Prof BR Natarajan introduced the chief guest to the audience stating that while a match stick can light a few diyas, a poet with his power packed lines can light the fire in the hearts of lakhs of people simultaneously. Poetry can undoubtedly induce the DOSE – Dopamine, Oxytocin, Serotonin, and Endorphins, the four hormones which determine the HQ Happiness Quotient which maximizes the feel good factor. Prof Sarvesh Paliwal Dean of Instructions welcomed the chief guest with a Khadi Maala a tradition unique to Banasthali. The prime movers and shakers of ICE Club Ms Sakshi Bajania President and Ms Bhawana Joshi Vice President anchored the proceedings. For one full hour, Kavi Yogendra had the audience eating out of his hands with his patriotic poetry highlighting Desh Bhakthi and Naari Shakthi with non stop applause. The poet was at his wittiest best when he said that though Pandit Jawaharlal Nehru did not send his daughter Indira Gandhi to Banasthali, he had sent his daughter to Banasthali for doing her BBA and MBA. The loudest round of applause came when Kavi Yogendra Sharma recited the lines written specially by him for the super star of Banasthali Avani Chaturvedi who made history by being the first woman fighter plane pilot in Indian Air Force. On behalf of Banasthali, Prof Jaya Dwivedi Dean School of Life Sciences and Prof Geeta Kapil Head of Hindi Department presented a glittering memento to the Chief Guest.For the next three days, various action events planned include GLOMEET, MATH PIRATES, PHYBIOEM, JUST A MINUTE, COSPLAY, POLITIQUE, DARE DEVILS, SCI-FI RACE, PINTURA, PANACHE, MID CITY MADNESS, WORDSWORTH, TECHNOBUZZ and WAR OF DJs. The spectrum of submission events include TOCHOEMOJI, CRAYON CARVING, ILLUSION, PRANK CLIPS and TECHMYTHO. The grand finale on 08 Feb 2019 will have IGNITE with loaded events to set the stage on Fire.The students and faculty who had come for Zerone inauguration left with beaming faces and pride that they were indeed part of an institution which is a jewel in the crown among the women’s universities not only in India today but across the globe. Festivals come and go but ZERONE stays in memory forever.For more details about Banasthali see http://www.banasthali.orgAbout Banasthali: Established in 1935, the Institution which is also the largest fully residential women’s university in the world has played a big role in revolutionizing women’s education and empowerment in India for the last eight decades. Banasthali has scripted numerous success stories in a wide range of fields, and stands tall among the citadels of learning in India today. Proud to be Banasthali alumni who call themselves as Banasthalites can be found in all latitudes, longitudes and altitudes in all walks of life across the globe. Banasthali has the pride of being chosen as a Faculty Development Centre under the MHRD Govt of India Pandit Madan Mohan Malaviya National Mission on Teachers and Teaching (PMMMNMTT) as well as for hosting Atal Incubation Centre (AIC) by NITI Aayog Apart from various National Rankings which include India Today #2, FICCI University of the year 2015, NAAC A grade, MHRD NIRF 29, in recent past, Banasthali has been in national and international media attention for getting Quacquarelli Symonds QS Asia University Ranking, QS BRICS Ranking, Diamond status under QS i-Gauge Indian University Rating and the overall Four Star Ranking in - QS Stars Rated for Excellence with 5 Stars for each for Teaching, Employability, Facilities, Arts & Culture and Inclusiveness.Banasthali Vidyapith Banasthali Rajasthan – 304022 Phone 91 1438 228456 / 228341 Email: info@banasthali.ac.in Website: http://www.banasthali.org Facebook: www.facebook.com/Banasthali.org