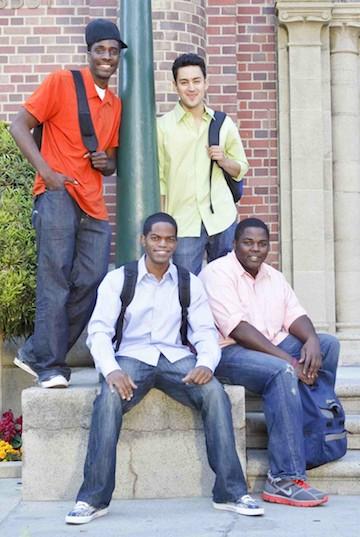 Los Angeles (June 1, 2010) – I Will Make You A Star Productions, LLC and Thought Collective Productions announced today the start of pre-production for the film, “Douglass U”. With principal photography slated to begin on July 31, 2010, in Los Angeles, “Douglass U” is an urban comedy about a young man’s unexpected freshman experience at one of the country’s (fictitious) premiere Historically Black College and Universities (HBCUs).The film was written by and stars Howard University’s College of Fine Arts graduate, Hari Williams and co-stars three other Bachelor of Fine Arts (BFA) in theater graduates – Ashford J. Thomas, Catfish Jean, and Johnny Soto. Produced by Charles Belk, this marks his sophomore feature film production effort. Along with Belk, Williams and Wiley B. Oscar (a HBCU alum – Florida A&M University) will also serve as producers on the film.“Douglass U” begins at the end of Williams’ character’s (“Aaron”) senior year at an all white high school. Wanting a more “black experience,” and against the approval of his Ivy League educated father, Aaron decides (after quickly reviewing a brochure and promotional DVD received in the mail) that Douglass University is the place for him. Little does he realize that his “experience” would be much more then what the school’s brochure and DVD presented.“This will be a really good film,” said Charles Belk. “It’s a funny, yet heartfelt story and it gives these four newcomers, all from excellent theater schools, the opportunity to make their biggest film role appearance to date, ’back in school.”In addition to being a writer, actor and film producer, Hari Williams has also produced a successful play in Los Angeles. In a role that paired him with Ashford J. Thomas, one of his Howard University best friends, he produced "Who is Curtis Lee?" and the brand new webseries "Howton U," both written by Thomas .A BFA in theater graduate from Fresno State University, Johnny Soto’s credits include co-starring opposite of Lamman Rucker (“Tyler Perry’s Why Did I Get Married Too” and “Meet the Browns”) in a 2009 release, and “Showboys”, a short that Soto wrote, directed and starred in.Once destined for a professional football career until an injury changed that, Catfish Jean, obtained his BFA in theater from California Lutheran University. Catfish has appeared in several national commercials, and is currently in development for “The Catfish Show”, a sketch comedy, webisode series.“Douglass U” is slated for a 4Q10 release date.WANT MORE ABOUT “DOUGLASS U”? Website – http://www.douglassu.com Facebook – http://www.facebook.com/douglassuthemovie Twitter – http://www.twitter.com/douglassu Hi-Res Photo Downloads – http://www.douglassu.com/pressreleasesI Will Make You A Star Productions, LLC I Will Make You A Star Productions, LLC specializes in video, film and web production services for projects on a tight budget. Pre-production services include script development, product placement and product integration, script evaluation and script writing, location scouting, casting, permits, licensing and clearances. Production services includes crew, lighting, sound and video equipment. Post-Production services include editing, sound design, sound mixing and custom musical composition, animation, motion graphics, and special effects.ExtraOrdinary Branding PO Box 93191 Los Angeles, CA Attn: Margarett Meriweather@Charles Belk Entertainment