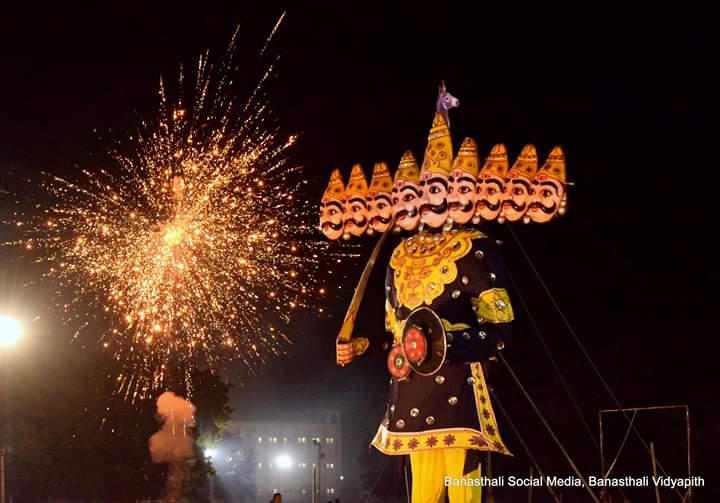 Vijayadashami or Dussehra even if they follow different rituals, ultimately convey the same message - the victory of good over evil - is celebrated on the tenth day of Navratri festival. In the northern and southern states, it is celebrated to mark the victory of Lord Ram over the ten headed Ravana. In eastern and northeastern states of India, it commemorates the victory of Goddess Durga over the demon king Mahishasura, and also marks the end of Durga Puja celebrations. Dussehra also marks the onset of preparations for the festival of lights – Diwali, which falls twenty days after the festival.With students coming from different parts of India, the 3.4 Square Kilometre Campus Banasthali with 16000 students itself is a mini India echoing the lines of Gurudev Rabindranath Tagore in National anthem “Panjaba-Sindhu-Gujarata-Maratha Dravida-Utkala-Banga.” To reinforce the fivefold education - Panchmukhi Shiksha, Banasthali has established a rich tradition of celebrating various days of national and international significance throughout the year. Every year as per Hindu calendar, this important festival is celebrated on the tenth day of the month Ashvin. The rich ethnic diversity of India truly came alive when the entire Banasthali campus assembled on Oct 19, 2018 evening at Viduala Maidan where a huge effigy of Ravan had been installed to celebrate Dusshera. After the performance of rituals by Vice Chancellor Prof Aditya Shastri, the effigy went in flames accompanied by a dazzling display of fireworks. The students and faculty of who came for Banasthali Dusshera celebrations left with beaming faces and pride that they were indeed part of a top ranking institution which is a jewel in the crown among the women's universities not only in India today but across the globe.For more details about Banasthali see http://www.banasthali.org/About Banasthali: Established in 1935, the Institution which is also the largest fully residential women’s university in the world has played a big role in revolutionizing women’s education and empowerment in India for the last eight decades. Banasthali has scripted numerous success stories in a wide range of fields, and stands tall among the citadels of learning in India today. Proud to be Banasthali alumni who call themselves as Banasthalites can be found in all latitudes, longitudes and altitudes in all walks of life across the globe. Banasthali has the pride of being chosen as a Faculty Development Centre under the MHRD Govt of India Pandit Madan Mohan Malaviya National Mission on Teachers and Teaching (PMMMNMTT) as well as for hosting Atal Incubation Centre (AIC) by NITI Aayog. Banasthali also has Quacquarelli Symonds QS Four Star Ranking and Diamond Status.Banasthali Vidyapith Banasthali Rajasthan – 304022 Phone 91 1438 228456 / 228341 Email: info@banasthali.ac.in Website: http://www.banasthali.org Facebook: www.facebook.com/Banasthali.org