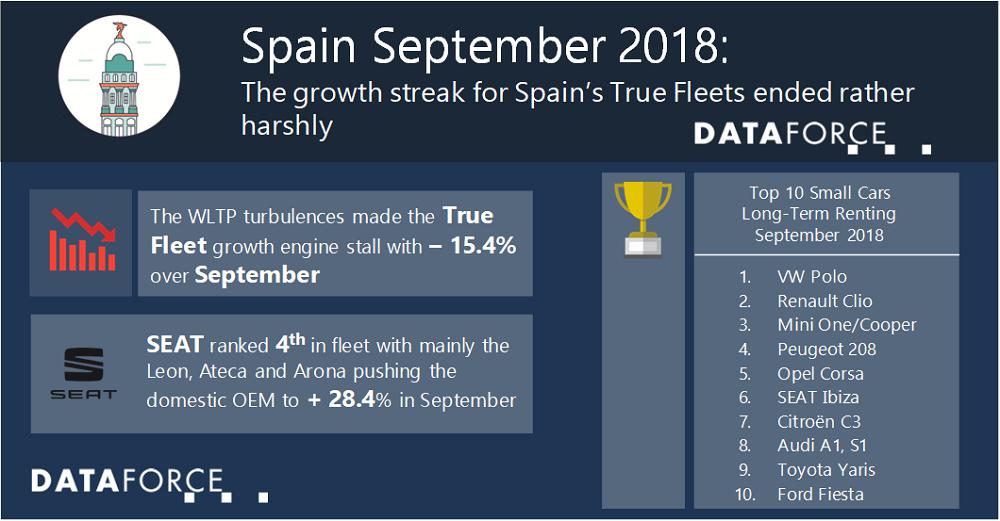 The Spanish True Fleet Market’s 55-months growth streak ended with a 17.1% in September with some unexpected consequences for the brand ranking. We also found one vehicle segment holding up against the WLTP storm.In light of the full implementation of WLTP as of September 1st, 2018 along with the homologation difficulties of several OEMs and anticipated registrations over the recent months, the only question was to what extent will the slump in September registrations be? In Spain, all market channels tumbled by a combined - 17.1% with the Total Market finishing at 73,000 passenger car registrations. All market segments suffered double-digit losses with the Private Market taking the hardest hit of - 18.1%. Also, the True Fleet Market’s streak of 55 (!) months of consecutive growth ended rather harshly in September (- 15.4%) while Special Channels were also down by 16.1%.Brand performance Just like the overall market segment performance, WLTP further influenced the True Fleet brand ranking with the majority of OEMs facing notable volume changes compared to September last year. Peugeot in 1st secured the top position eking out 1.4% over September 2017. The podium was completed by Volkswagen in 2nd and BMW in 3rd both gaining one rank. For Volkswagen this was rather notable since they suffered a loss of 7.5%.SEAT (4th) achieved the highest monthly growth rate among the top 10 marques (+ 28.4%) and made a huge leap of 7 positions thanks mainly to the Leon, Ateca and Arona. Another big jump came from Toyota (5th) climbing up the ladder 5 places (+ 18.7%). Several models from the Japanese manufacturer had a very strong month, like the Prius Plus, C-HR, Yaris and the Auris Touring Sports.Formerly ranked 2nd, Renault dropped down to 6th position, followed by Mercedes and Opel. The manufacturer from Rüsselsheim was the third top 10 brand with robust double-digit growth over September (+ 21.2%) with the biggest increases from the Grandland X and Crossland X. Citroën and Ford rounded out the top 10 with both OEMs facing drops in registrations.Vehicle Segments In September, even the booming SUVs could not resist the market disturbance, nonetheless its loss of - 0.8% was limited when compared to other vehicle segments like the Middle-Class (- 46.7%) or Compact Cars (- 28.7%). The only exemption came from the Small Car segment, which achieved a small surplus of 1.2% over September. Although there were also some significant volume losses, registrations of some models increased significantly. The VW Polo stood out most notably (+ 318.5%) while the Mini One/Cooper showed a stellar performance as well, almost doubling its prior year’s September volume (+ 93.1%). Three other models also finished positively over this difficult month inside Small Car’s top 10: the Opel Corsa, Dacia Sandero and Toyota Yaris.(436 words; 2,675 characters)DATAFORCE – Focus on Fleets Dataforce is the leading provider of fleet market data and automotive intelligence solutions in Europe. In addition, the company also provides detailed information on sales opportunities for the automotive industry, together with a wide portfolio of information based on primary market research and consulting services. The company is based in Frankfurt, Germany.Nils Wehner Dataforce Verlagsgesellschaft für Business Informationen mbH Hamburger Allee 14 60486 Frankfurt am Main GermanyPhone: +49 69 95930-295 Fax: +49 69 95930-549 Email: nils.wehner@dataforce.de www.dataforce.de

09-04-2018 | IT, New Media & Software
Iceseminars
USB Type C Training September 2018 - Munich
In September 2018 Iceseminars offers a new training course on USB Type-C™. It will be held on the 17.09.2018.    Interfaces of all kind are gaining importance. This is the case not just for Software, with the oft-mentioned APIs, but also for devices. The development of the Internet of Things and industry 4.0 further increase the demand for standardized interfaces to connect and be readable for third parties. USB is a highly
09-28-2017 | Industry, Real Estate & Constr …
MEHITS
New OGR opening on September 30th
Mitsubishi Electric Hydronics & IT Cooling Systems, through its brand Climaveneta, has recently supplied HVAC units to the new OGR in Turin which will open on 30 September, after a thousand days of construction. One hundred million euros were invested by the CRT Foundation for the refurbishment of the OGR, through the recovery of the entire industrial archeology complex comprising the majestic H-shaped building of approximately 20,000 square meters of surface
08-15-2011 | Leisure, Entertainment, Miscel …
Olive PR Solutions
September is "Arts Month San Diego"
Known for 70 miles of beaches and year-round mild weather, San Diego offers visitors arts and culture happenings that are just as dazzling as its Pacific Ocean views. During September, visitors can enjoy the vibrant local arts communities and help celebrate “Arts Month San Diego”. A month-long festival that celebrates the vibrancy and diversity of San Diego’s thriving visual and performing arts scene. San Diego, CA, August 12, 2011 --
10-11-2010 | Media & Telecommunications
KeepCalling.com
September 30, 2010
KeepCalling Supports Mosoj Yan In May 2009 KeepCalling through LlamaBolivia.com began a CSR project. Mosoj Yan is a non profit organization which has been conducting programs for prevention, intervention, rehabilitation, and social and family reintegration in the city of Cochabamba, Bolivia. Their main objective is to work with girls and young women to continue their educational activities. They also work with teenagers and teenage mothers who live in the streets
09-30-2010 | Tourism, Cars, Traffic
EPOQUE HOTELS
Epoque Club: September 3th, 2010 in Beijing
Epoque Hotels has launched Epoque Club on September 3th, 2010 at Hotel G Beijing. Epoque Club was a professional gathering for Epoque’s hotel members, certified medias, right customers and anything new in the boutique hotels industry. The president of Epoque Hotels, Mr. David Maranzana, joined this event and welcomed all the new members and participants. Members hotels that participated to the event are Kapok Hotel Beijing, Hotel G, Yi House Boutique
09-17-2007 | Logistics & Transport
Analytiqa
Analytiqa: Logistics Bulletin: Friday 14th September
This week\'s Logistics Bulletin reports on news in the French press that suggest Geodis is to announce the acquisition of logistics provider Rhode & Liesenfeld within two weeks. Rohde & Liesenfeld is a member of TGA, a global strategic alliance with Geodis Overseas Networks that was established five years ago. In other M&A news, Schneider Logistics has acquired BaoYun Logistics, one of China\'s top 30 private logistics enterprises. Also in
Comments about openPR
9 o'clock: discuss press release with client, 10 o'clock: submit release to openPR, within the briefest possible time release is published and displayed in a prominent place on openPR.de. I am thrilled!
Zehra Spindler, Calypso Now! - Communication Agency