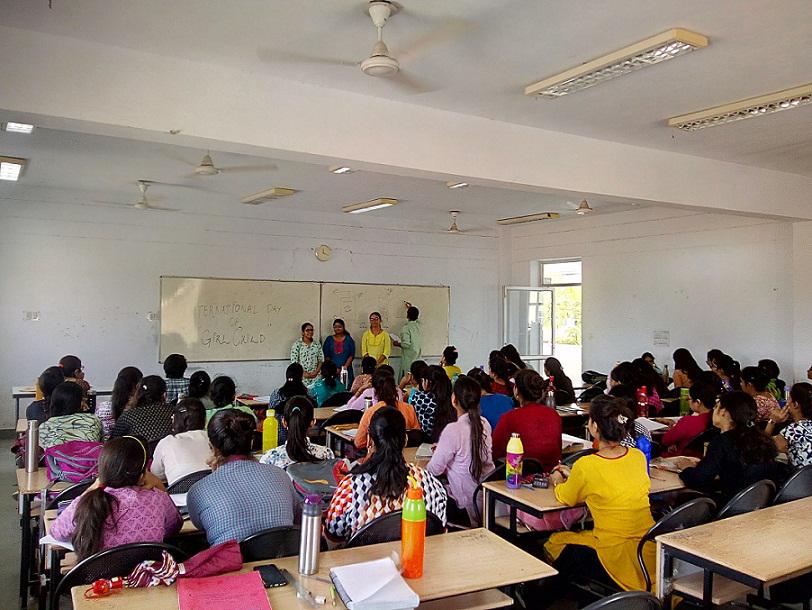 Worldwide, today, more than 130 million girls of school age are out of school. In addition, of the 600 million adolescent girls who will enter the labor market in the next decade, more than 90% live in developing countries and will work in an informal economy where unpaid work, abuse and exploitation are more prevalent. Globally, women constitute less than 30% of employees in Information Technology companies as well as R&D institutions. With the aim to highlight and address the needs and challenges girls face, while promoting girls' empowerment and the fulfillment of their human rights, since 2012, October 11 every year has been marked as the International Day of the Girl Child in accordance with United Nations General Assembly adopted Resolution 66/170.UNESCO, the United Nations lead agency for education in the context of the 2030 Agenda, is working with the international community so that girls can benefit from 12 years of basic education free of charge. It is committed to ensuring that States include in school curricula issues relating to gender equality, health and sexuality, so as to break with the social habits and collective representations that impede girls’ freedom and constitute barriers to their intellectual formation and social and professional integration. The integration of girls in the changing world of work includes in particular improved access to science and technology careers, where they are too often underrepresented.In order to encourage innovative teaching that helps girls to acquire the self confidence they need and that will reduce gender inequalities, UNESCO established in 2015, with the support of the Government of China, a Prize for Girls’ and Women’s Education. This year, the Prize is awarded to the Misr El Kheir Foundation (Egypt), for supporting girls’ education in poor villages, and the Women’s Centre of Jamaica Foundation (Jamaica), so that it may continue its support for pregnant teenagers and young mothers in Jamaica, giving them a second chance to continue their educationIf effectively supported during the adolescent years, girls have the potential to change the world – both as the empowered girls of today and as tomorrow’s workers, mothers, entrepreneurs, mentors, household heads, and political leaders. An investment in realizing the power of adolescent girls upholds their rights today and promises a more equitable and prosperous future, one in which half of humanity is an equal partner in solving the problems of climate change, political conflict, economic growth, disease prevention, and global sustainability.Educated and skilled workers are in great demand, but roughly a quarter of young people – most of them female – are currently neither employed or in education or training. Considering the fact that today's generation of girls is preparing to enter a world of work that is being transformed by innovation and automation, the theme chosen is With Her: A Skilled Girlforce.” The Message from UN Secretary - General António Guterres goes befittingly as “On this International Day of the Girl, let us recommit to supporting every girl to develop her skills, enter the workforce on equal terms and reach her full potential," While the Message from Dr. Natalia Kanem Executive Director of UNFPA, the United Nations Population Fund goes as “We believe in the power of girls to change this world for the better. Let’s give them the chance.”Banasthali which is world’s largest fully residential women’s university is committed to women awakening and empowerment through education. On 11 Oct 2018, BTech third year Chemical Engineering students Ms Avani Ganeshiya addressed the students giving significance of the day, Ms Ibha Singh presented an overview of the background for the day while Ms Shubhangi Vats highlighted the theme for the year. Faculty Sri Saurabh Joshi and Prof BR Natarajan anchored the proceedings and pointed out that when a mission is taken up with passion, there are no dreams too large, no innovation unattainable and no frontiers beyond reach.For more details about Banasthali see http://www.banasthali.org/About Banasthali: Established in 1935, the Institution which is also the largest fully residential women’s university in the world has played a big role in revolutionizing women’s education and empowerment in India for the last eight decades. Banasthali has scripted numerous success stories in a wide range of fields, and stands tall among the citadels of learning in India today. Proud to be Banasthali alumni who call themselves as Banasthalites can be found in all latitudes, longitudes and altitudes in all walks of life across the globe. Banasthali has the pride of being chosen as a Faculty Development Centre under the MHRD Govt of India Pandit Madan Mohan Malaviya National Mission on Teachers and Teaching (PMMMNMTT) as well as for hosting Atal Incubation Centre (AIC) by NITI Aayog. Banasthali also has Quacquarelli Symonds QS Four Star Ranking and Diamond Status.Banasthali Vidyapith Banasthali Rajasthan – 304022 Phone 91 1438 228456 / 228341 Email: info@banasthali.ac.in Website: http://www.banasthali.org Facebook: www.facebook.com/Banasthali.org

10-05-2020 | Fashion, Lifestyle, Trends
The GlamBug
An Interview With Glam Girl Sreemayee: The Next Indian Sensation
Paris, Kolkata; 05th Oct, 2020: Sreemayee Sikder, a new name into the fashion world. From modeling to acting, from acting to dance she is awesome on her way. Her attractive look and intelligent attitude makes her more desirable. We "The Glam'Bug" get the chance of interview her & getting her precious time for listening her story of experiences, story of success. See her full story here:https://theglambug.com/glam-girl-sreemayee-the-next-sensation/ Q. What projects are you
02-01-2019 | Fashion, Lifestyle, Trends
Messy Girl Co
Messy Girl Co Instant Stain Remover Pen For Aussie
Summary: Messy Girl Co announces to offer instant stain pen remover designed to eliminate fresh food and drinks stains on the spot. This powerful on the go stain remover is a perfect companion for females to take on the modern messes. Those who travel often can carry the stain remover pen in their purse or bag without any hassle. It is a quick remedy for Aussies which is simple to
01-24-2018 | Politics, Law & Society
Banasthali
National Girl Child Day at Banasthali
Gender equality is indeed more than a goal in itself as it is a precondition for meeting the challenges of reducing poverty, promoting sustainable development and building good governance. According to Dr. Sharada Srinivasan, Associate Professor University of Guelph, Ontario, Canada who is a well known researcher in the area of female infanticide, “Stemming from a deep unwantedness of daughters, sex selection is today in India a national problem and Sex
01-30-2017 | Fashion, Lifestyle, Trends
IMAGE UNLIMITED COMMUNICATIONS
Seven Ways to Say “I Love You” at Saltie Girl
(BOSTON, MA) - [January 25, 2017] – This Valentine’s Day, “seas” the love at Saltie Girl, the latest endeavor from award-winning restaurateur Kathy Sidell. Throughout the weekend, Friday, February 10th, 2017 through Sunday, February 12th, 2017, and of course on Tuesday, February 14th, 2017, guests will enjoy seven savory specials in addition to Saltie Girl’s regular dinner menu. Guests also have the rare opportunity to make reservations on Tuesday,
01-24-2017 | Science & Education
JMA Pilani Rajasthan
JMA Pilani Rajasthan Celebrates National Girl Child Day
Gender equality is much more than a goal in itself as it is a precondition for meeting the challenges of reducing poverty, promoting sustainable development and building good governance. Considering the importance of the Girl Child in the larger interests of the nation building task, Government of India in the year 2009 had declared that January 24 be observed every year as National Girl Child Day. The Child Sex Ratio
09-12-2013 | Leisure, Entertainment, Miscel …
MLC PR
Marina Tseva Cast in SYFY's Lost Girl
Marina Tseva, has been cast in SYFY's hit supernatural drama "Lost Girl," where she will be playing a role in a flashback with the main character, 'Bo.' Created by Michelle Lovretta and produced by Jay Firestone and Prodigy Pictures Inc., in association with Shaw Media; "Lost Girl" follows the life of a Succubus named 'Bo.' Played by Anna Silk, 'Bo,' goes on a journey to control her abilities, discover
Comments about openPR
OpenPR ist the nicest and most clearly laid out PR platform I have seen to this day. The press releases are displayed very nicely and clearly and without any unnecessary frills. The updates are fast and the finished release looks appealing and is clearly legible. Even with 16 years of experience one discovers new things from time to time. Congratulations!
Gabriele Ketterl, Director Marketing & PR, Menads