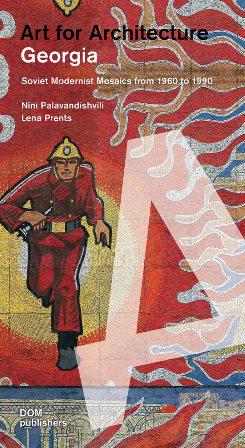 Soviet Modernist Mosaics from 1960 to 1990While buildings in the style of Soviet modernism in Georgia have received global recognition for several decades, the artworks created for architecture during this period – monumental, decorative mosaics – are still waiting to be discovered and appreciated internationally. These glorious, colourful mosaics were, and still are, an independent yet inseparable part of the architecture in Georgia. They express the function of the respective building, structure its facade, and sometimes even merge with it to form an elaborate whole. However, many of these artworks, which were far more than simply bearers of state propaganda, are currently under threat of destruction.This architectural guide – Georgia. Art for Architecture: Soviet Modernist Mosaics from 1960 to 1990 – represents the first systematic documentation of these unique relics of mosaic art in Soviet Georgia. Nini Palavandishvili and Lena Prents, experts in this field, present photos and short essays to guide the reader through the multi-faceted world of Soviet mosaics in Georgia, which feature their own unique characteristics not found in other places in the former Soviet Union. The mosaics were created not only in cities but also in villages and residential settlements. Most of them were hung on public buildings and industrial facilities, but also on canteens as well as conference and concert halls. They can also be found in the form of independent decorative wells and wall structures. Unique examples of these mosaic-covered works of architecture include the former Café Fantasia on a boulevard in Batumi and the ‘bus pavilions’ in Abkhazia. Bus stops bedecked with mosaics still stand in small cities; complex, three-dimensional compositions are still to be found in health resorts such as Pitunda (also known as Bichvinta) or Kobuleti. The authors draw attention to this remarkable artistic heritage of a recent past and show its cultural significance, thereby also making a powerful appeal for its protection and preservation.Georgia is Guest of Honour at the 2018 Frankfurter Buchmesse (Frankfurt Book Fair). To mark this occasion, DOM publishers is presenting not only this volume but also the Architectural Guide Tbilisi as well as Hybrid Tbilisi, a book that accompanies the exhibition of the same name, which will take place at the Deutsches Architekturmuseum (DAM) in Frankfurt am Main from 29 September 2018 to 13 January 2019.Nini Palavandishvili / Lena Prents Georgia. Art for Architecture Soviet Modernist Mosaics from 1960 to 1990 135 x 245 mm, 280 pages 350 images, softcover ISBN 978-3-86922-691-0 EUR 38,00 September 2018. DOM publishers, BerlinThe Architectural Guides by DOM publishers are handy travel companions for readers interested in architecture and culture. Projects are carefully selected and researched to make each individual book a ready work of reference, while background information and attractive design inspire armchair travellers to imaginary journeys. In 2014, the series was awarded with the „Iconic Award“ by the German Design Council, and in 2016 with the „German Design Award Special“. Further information: www.dom-publishers.comgisela graf communications supports publishers, museums and institutions specialising in architecture, design or art, with professional press and PR work, also on an international level. Communications — Individual concepts and texts for media relations Connections — Media contacts, interview arrangements, events — anything that brings people and subjects together Corrections — Editing and copy editing of texts and specialised publications, catalogues and brochuresgisela graf communications Gisela Graf Schillerstr. 20 D 79102 Freiburg T +49 761 791 99 09 F +49 761 791 99 08 contact@gisela-graf.com www.gisela-graf.com

You can edit or delete your press release Georgia. Art for Architecture here