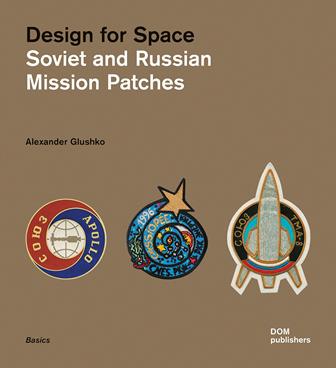 The white helmet of Yuri Gagarin is adorned with the Cyrillic letters CCCP – in a luminous shade of red. The images of the first man in space circulated throughout the world in 1961 and were highly effective in terms of publicity. Although Gagarin only flew with military insignia, a new genre of political art was set to evolve soon after. The dove of peace with which Valentina Tereshkova journeyed across space in 1963 arguably constitutes a specific message. Since then, the embroidered emblems on the space suits of crew members have become an independent form of political art. This heraldic tradition has continued until the present day in the East and West for all space missions, taking into account motifs, forms and colours, the location on the space suit and the occasion for which these were affixed.The Design for Space volume documents a rare collection of almost 250 mission patches worn by Soviet and Russian cosmonauts alike, as well as their international colleagues when they travelled through space together. Alexander Glushko, one of the leading specialists in manned space flight and rocket technology in Russia, categorises for the first time partially forgotten emblems which have been compiled from various archives. Irrespective of whether this involves abstract symbols or figurative depictions – such as the Russian-French “Starman” dating back to 1982 or the “The Buddha’s Wheel” from the joint Russian-Indian mission in 1984 – these countless variations of motifs and forms are integrated into a complex, often contradictory, system. They were intended to express the significance of heroism within Soviet society and, at the same time, promote an appreciation of achievements. This collection provides ample historical background information and traces developments in Soviet and Russian symbolism. Furthermore, Glushko displays the emblems together with rare photographs of space crews to help the reader make associations. This book thus provides a basis for interpreting cosmic heraldry, which has been tightly knit with the Russian history of space travel.This book will inspire space enthusiasts, cultural historians and experts on heraldry in equal measure. For more in-depth reading on the topic, we offer a monograph on the space architect Galina Balashova. In addition to spaceships, she has also designed arguably the most widely known emblem, namely that of the Soviet-American Apollo-Soyuz flight in 1975.gisela graf communications supports publishers, museums and institutions specialising in architecture, design or art, with professional press and PR work, also on an international level. Communications — Individual concepts and texts for media relations Connections — Media contacts, interview arrangements, events — anything that brings people and subjects together Corrections — Editing and copy editing of texts and specialised publications, catalogues and brochuresgisela graf communications Gisela Graf Schillerstr. 20 D 79102 Freiburg T +49 761 791 99 09 F +49 761 791 99 08 contact@gisela-graf.com www.gisela-graf.com