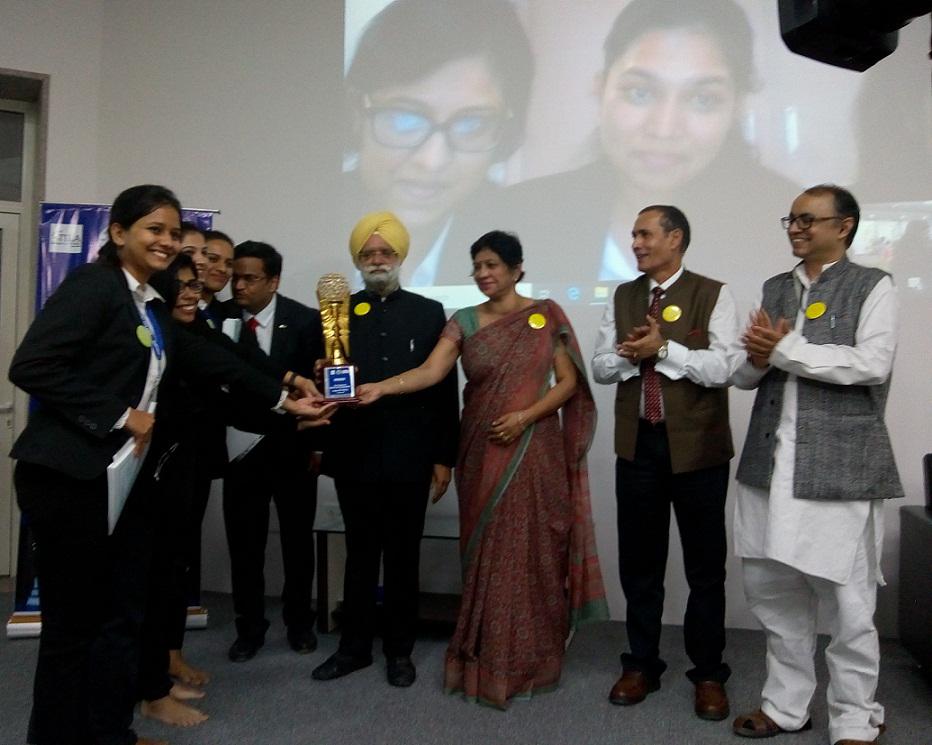 Jamnalal Bajaj School of Legal Studies JBSLS Banasthali in association with Trans India Law Associates (TILA) & knowledge partner Dr. Gopal Energy Foundations DGEF organized an International Moot Court Competition on Energy Laws 2018 on 02 October 2018 to mark the auspicious occasion of 150th birth anniversary of Mahatma Gandhi. TILA is world’s largest consultancy firm in energy sector and legal advisor to International Solar Alliance and has 1786 associate advocates covering all the districts of India and 51 global partners across the world to provide full integrated legal services. Dr. Gopal Energy Foundations is a non-profit premier organization with focus on energy revolution to remove the curse of energy poverty and advocate the use of renewable sources of energy.The Organizing Committee for the Moot Court included Prof. Aditya Shastri, Vice Chancellor, Banasthali Vidyapith as Patron; Prof. Harsh Purohit, Dean, Faculty of Law, Banasthali Vidyapith as Convener; Shri Raj Singh Niranjan, Administrator, TIMCCE, Energy Law expert and Managing Partner, TILA; Dr. (Ms.) Rajani Patel, Co-Convenor, President, (DGEF); Ms. Rashmi Singh Rana, Co-Convener, Head, Department of Legal Studies, Banasthali Vidyapith; Ms.Asha Rani Rawat, Faculty Coordinator, Banasthali Vidyapith and Shri S. Gopalakrishnan, Public Relation Officer for the event, Banasthali Vidyapith.Luminaries from India and Abroad graced the occasion as judges which included Sri Raj Singh Niranjan Founder of TILA, Dr GP Patel Director Water Resources Central Board of Irrigation and Power, Mr Sai Subrahmanyam Pulipaka (Alumnus of BITS Birla Institute of Technology and Science) Founder Pilani Photovoltaics and CEO of Soreva Energy. Chief Guest for the function was Shri K.T.S. Tulsi, Hon’ble Member of Parliament (Rajya Sabha) and former Addt. Solicitor General, GOI while Smt. Anjuli Chandra, Hon’ble Member Punjab State Electricity Regulatory Commission was the Guest of Honor. Various teams from renowned law colleges from all over India which included Damodaram Sanjivayya National Law University DSNLU, Vishakhapatnam, Andhra Pradesh; University of Petroleum and Energy Studies (UPES) Dehradun, S.S Jain Subodh Law College, Jaipur competed for the trophies and prizes. The highlight of the competition is that all participants were women and the team from DSNLU Visakapatnam virtually participated through video conferencing and bagged the best speaker and researcher prizes too. Team UPES Dehradun won the finals indeed with flying colours. The valedictory function was held at the elegant Auditorium of Atal Incubation Centre Nav Mandir. Prof Harsh Purohit Dean welcomed the dignitaries and after lamp lighting the function began with the National anthem. Mr Raj Singh Niranjan TILA gave an overview of the grim energy scenario and advocated Right to Energy as a Fundamental Right. Smt Anjuli Chandra gave a clarion call to all women to do double the work to be at least half equal to men and congratulated the women for taking up legal profession as a mission with passion. Sri KTS Tulsi at his wittiest best had the audience literally eating out of his hands. He jokingly remarked to a thunderous round of applause that the participants who spoke in the moot court were better than many lawyers in courts. He said that legal profession suits women better as women are good communicators and the nature of work is flexible, allows breaks of several years and above all can be done from home office.Ms Ginny Rajvanshi Final Year student of BA LLB Banasthali along with Ms Mrinalini Negi TILA associate anchored the proceedings and Prof Harsh Purohit gave the vote of thanks. The students and faculty who attended the Moot Court Valedictory function left with beaming faces and pride that they were indeed part of an institution which is a jewel in the crown among the women’s universities not only in India today but across the globe.For more details about Banasthali see http://www.banasthali.org/About Banasthali: Established in 1935, the Institution which is also the largest fully residential women’s university in the world has played a big role in revolutionizing women’s education and empowerment in India for the last eight decades. Banasthali has scripted numerous success stories in a wide range of fields, and stands tall among the citadels of learning in India today. Proud to be Banasthali alumni who call themselves as Banasthalites can be found in all latitudes, longitudes and altitudes in all walks of life across the globe. Banasthali has the pride of being chosen as a Faculty Development Centre under the MHRD Govt of India Pandit Madan Mohan Malaviya National Mission on Teachers and Teaching (PMMMNMTT) as well as for hosting Atal Incubation Centre (AIC) by NITI Aayog. Banasthali also has Quacquarelli Symonds QS Four Star Ranking and Diamond Status.Banasthali Vidyapith Banasthali Rajasthan – 304022 Phone 91 1438 228456 / 228341 Email: info@banasthali.ac.in Website: http://www.banasthali.org Facebook: www.facebook.com/Banasthali.org

11-12-2018 | Energy & Environment
Skylight Energy Melbourne
Skylight Energy Melbourne
Skylight Energy is the leading provider of solar energy in Australia. We specialise in high quality yet affordable renewable energy products for either your home or business. Our large selection of products consists of only the finest Tier 1 solar panels, solar inverters and home battery packs. All of our products have been approved by the Clean Energy Council, and certified for safety to the highest Australian and international standards. Whether
06-08-2018 | Energy & Environment
qyreports
Green energy
Green energy is the electricity derived from smooth assets generating minimum pollution and consists of sun photovoltaic, hydropower, wind electricity, bio-fuels and geothermal. expanded investments in era studies and improvement, supportive regulatory frameworks, extended consciousness and electricity security troubles and environmental concerns amongst others are fueling the boom in call for for clean and inexperienced energy. The report on the Global Smart Cards Automated Fare Collection System Market is a thorough
03-01-2017 | Energy & Environment
eSight Energy
Complete Energy Management from eSight Energy
Why choose eSight Energy? You can manage and reduce your energy with the eSight software by importing data into the software and managing your expectations with informative and intuitive graphs and charts. Please view the video here: https://vimeo.com/203430337 eSight Energy provides energy management solutions for use across any type of building or process. With installations across Europe, the US, Middle East and Asia, solutions are provided through a network of resellers
02-01-2011 | Business, Economy, Finances, B …
Breakthrough Energy Solutions
Breakthrough Energy Solutions
RenewAge Energy Solutions, which is based at Los Angeles in California, has just emerged as the fastest growing energy & water efficiency service provider in the country. The energy solutions and energy efficiency California offered by the company are able to reduce the electricity requirements in homes and commercial properties substantially. Because of this, the operating costs on electricity demands can be cut by as much as 30% to 60%.
11-15-2010 | Energy & Environment
Heraeus Noblelight
Plant Optimisation Saves Energy
Can the coating dry more quickly? Is it possible to reduce the rejection rate? Does the plant use too much energy? Many companies ask themselves questions like these. Energy and material costs are important considerations for industrial companies who wish to maintain or improve their competitiveness. At the same time, the optimisation of existing plant can often be the more sensible and cost-effective option over installing new plant. A
11-12-2009 | Energy & Environment
cronos imc GmbH
Reporting in Energy Trading
cronos imc combines expertise in energy trading and comprehensive reporting know how for an individual consulting service. In a few days to custom-fit and specific recommendations: This is the target of cronos imc GmbH. cronos imc provides energy traders the individual analysis of their Business Intelligence (BI) landscape. The special value lies in the vendor neutral approach. Using a checklist, all relevant information and associated processes that are needed for
Comments about openPR
9 o'clock: discuss press release with client, 10 o'clock: submit release to openPR, within the briefest possible time release is published and displayed in a prominent place on openPR.de. I am thrilled!
Zehra Spindler, Calypso Now! - Communication Agency