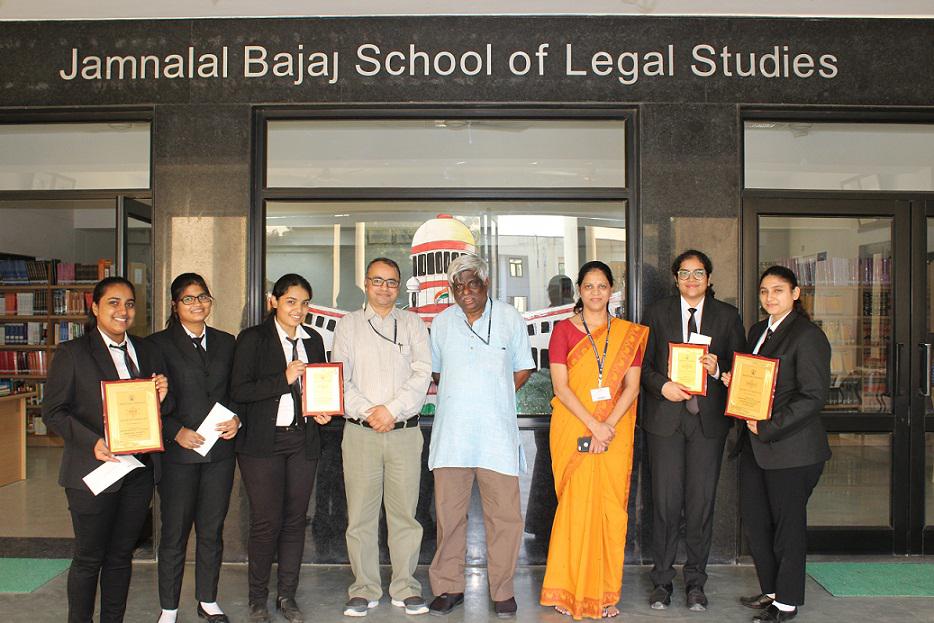 Jamnalal School of Legal Studies JBSLS is the law faculty at Banasthali Vidyapith, established in the year 2013. It is one of its kind law department in India established for empowering women in the legal arena and was inaugurated by former Chief Justice R.M. Lodha. One of the three original copies of the Indian Constitution is presently in Banasthali whose founder Shri Hiralal Shastriji was one of the members of the constituent assembly which drafted the constitution.Year after year, Banasthali established in 1935 has always been one among the top institutions in rankings by Nielsen India Today well known Best College survey as well as Best University Rankings apart from NIRF - National Institutional Ranking Framework by Ministry of Human Resource Development MHRD Government of India. To quote Ashwin Fernandes, regional director, Quacquarelli Symonds QS - India “Banasthali Vidyapith has been imparting education to women since a long time. It is beyond writing and above any ranking”.Banasthali Law School started with only 120 students and today is a buzzing hub of over1100 law students and 30 faculty members. Be it moots, debates, seminars, MUNs etc. JBSLS has always performed the best wherever it has participated. Banasthali students have been regularly participating in Moot Court Competitions held at various institutions which include Manipal University, ICFAI University, Amity University, Banaras Hindu University, Nirma University and winning laurels in various categories.Banasthali conducted a moot court competition during 26 – 27 Sep 2018 on Breach of Contract. The moot problem was based on Law of Contract and Constitution. The terms and conditions of the contract were of such a nature which violated the fundamental rights of the parties. 9 teams keenly participated in the Moot and the valedictory function was conducted on 27 Sep 2018. Law Faculty member Ms Ridhipa Jakhar coordinated the moot Court and Ms Ginny Reywanshi final year BA LLB student anchored the proceedings. Prof Harsh Purohit Dean at Banasthali introduced the chief guest Prof BR Natarajan presently Head of Chemical Engineering Department Banasthali as one with vast academic and administrative experience who had earlier spent over three decades at BITS Pilani as Dean and later as Vice Chancellor of Sangam University Bhilwara. Prof Natarajan urged the Banasthali law students to have a go at International Moot Court competitions such as Philip P Jessup in coming times and awarded the prizes. Banasthali Third year BA LLB students Dixita, Deepshikha and Archana Shukla bagged the best Memorial. Anshika Tiwari who bagged best speaker and Rashi Baisla both Banasthali BA LLB third year students were the Runner up. Prof Rashmi Singh Rana Head of Department of Legal Studies at Banasthali proposed vote of thanks. Nandini Fintech Services Pvt Ltd which is a Startup incubated at Atal Incubation Centre Banasthali sponsored the prizes for the competition. The students and faculty who attended the Moot Court Valedictory function left with beaming faces and pride that they were indeed part of an institution which is a jewel in the crown among the women’s universities not only in India today but across the globe.For more details about Banasthali see http://www.banasthali.org/About Banasthali: Established in 1935, the Institution which is also the largest fully residential women’s university in the world has played a big role in revolutionizing women’s education and empowerment in India for the last eight decades. Banasthali has scripted numerous success stories in a wide range of fields, and stands tall among the citadels of learning in India today. Proud to be Banasthali alumni who call themselves as Banasthalites can be found in all latitudes, longitudes and altitudes in all walks of life across the globe. Banasthali has the pride of being chosen as a Faculty Development Centre under the MHRD Govt of India Pandit Madan Mohan Malaviya National Mission on Teachers and Teaching (PMMMNMTT) as well as for hosting Atal Incubation Centre (AIC) by NITI Aayog. Banasthali also has Quacquarelli Symonds QS Four Star Ranking and Diamond Status.Banasthali Vidyapith Banasthali Rajasthan – 304022 Phone 91 1438 228456 / 228341 Email: info@banasthali.ac.in Website: http://www.banasthali.org Facebook: www.facebook.com/Banasthali.org