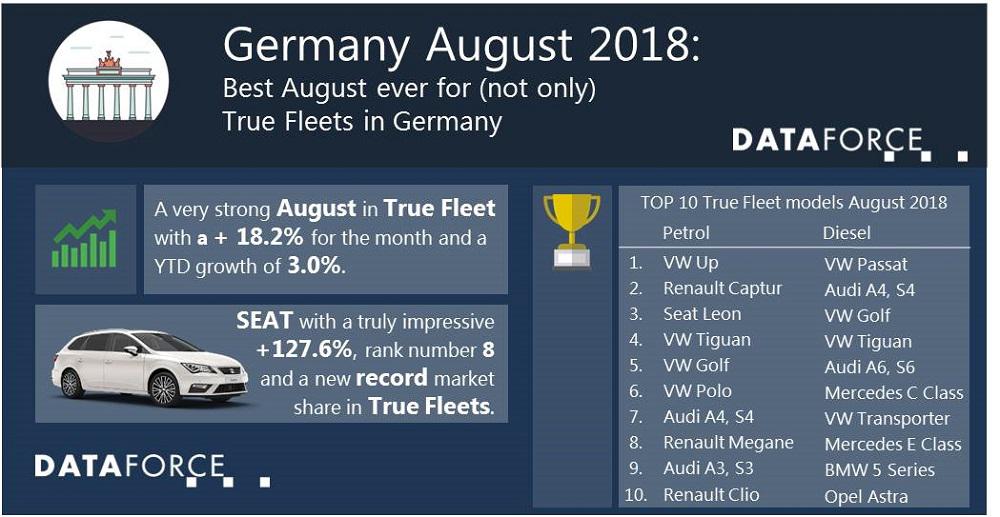 Usually the month of August is comparatively weak, but not this time, as we saw more than 300,000 new passenger car registrations in the Total Market for the first time ever for the month of August. Due to the introduction of WLTP on September 1st, August 2018 was the last chance to register new cars which had only been tested on the old NEDC standard. Given these circumstances there were only two feasible options for manufacturers and importers: either to register the car until the end of August or to store them temporarily until the testing procedures have been fully completed.As we can see the “register now” option was obviously the chosen one for most of the market players, especially in those channels where OEMs have the biggest influence. Self-registrations on the manufacturers increased by + 13.9% and the rent-a-car numbers grew by + 27.7% compared to August 2017. But these growth rates were nothing compared to the new car registrations on dealerships which jumped by no less than 80.8%! This increase pushed the volume to more than 83,000 passenger cars, an impressive figure which has only been higher once in the German market. This leaves the Private Market which registered a rather moderate + 4.3%, while True Fleets were up by + 18.2% achieving its strongest monthly growth rate in 2018 so far.Brand performance Despite this strong result we saw four brands with a drop inside of the top 10. Both Volkswagen and Audi both scored a five-digit registration number and above-average growth rates while Mercedes and BMW ranking 3rd and 4th had a challenging August. Thanks to a remarkable + 178.9% Renault jumped into fifth position overtaking Ford and Škoda who both were in the red, though for the former this was a dip of just 3 registrations.SEAT (+ 127.6%) was not far behind Škoda and had a fantastic month with increasing volumes across its whole product portfolio, achieved a new record market share of 5.4% and overtook Opel (9th) for the first time ever in the German True Fleet Market! Toyota completed the top 10 while Hyundai (11th, + 93.6%) narrowly missed entering this group despite a jump of six places and its best market share in almost two years which was mainly fuelled by the models i10 and Tucson.There were two further brands which achieved their best market share in the True Fleet Market place even though their target groups are slightly different to say the least. Dacia was the first of them increasing their fleet registrations by 60.5%. The main pillars were the Duster (putting itself into the top 10 Compact SUV in August) and the Dokker which even ranked third on the Small Utilities ladder behind Volkswagen Caddy and Renault Kangoo.The second brand deservedly garnering a mention even managed a growth rate of more than a thousand per cent. Admittedly: extremely high growth rates are sometimes a bit misleading and you should also look at the absolute figures. The 70 new registrations in August are maybe not too impressive but nevertheless higher than the volumes of brands such as Subaru, Lexus, DS or Maserati. In case you’re responsible for your fleet and interested in purchasing one of these I certainly would recommend a slightly larger wallet as the brand we are speaking of is Ferrari! Top-seller of the brand from Maranello is their “entry model” 488 but we also saw two “LaFerrari” showing up (that’s the reason why the Hybrid share within Ferrari adds up to 2.9%). Maybe these fleet cars are used as the fastest way to import or export gold bars, but that’s just a guess.Speaking of Alternative fuel types: the share of both Hybrid and Full Electric remained unchanged compared to August 2017, while the share for Petrol cars climbed to 40.7% which is the highest since December 2001, a time when the Golf IV was leading the fleet market! In contrast the Diesel share was below 55.0% for the very first time (54.95% to be precise). And the decline continues…DATAFORCE – Focus on Fleets Dataforce is the leading provider of fleet market data and automotive intelligence solutions in Europe. In addition, the company also provides detailed information on sales opportunities for the automotive industry, together with a wide portfolio of information based on primary market research and consulting services. The company is based in Frankfurt, Germany.Christian Spahn Dataforce Verlagsgesellschaft für Business Informationen mbH Hamburger Allee 14 60486 Frankfurt am Main GermanyPhone: +49 69 95930-265 Fax: +49 69 95930-333 Email: christian.spahn@dataforce.de www.dataforce.de

08-13-2021 | Fashion, Lifestyle, Trends
The Decor Kart
The Decor Kart Announces ‘End of Season Sale’ from 12th August to 30th Augus …
During the End of Season Sale, the online Decor retailer will be providing flat 40% off on all the home Decor products. • Sale Starts 12th August 9pm. • Discount covers everything online and in-stores. • Save big on home Decor, kitchen Decor, wall Decor and collections. Delhi, August 10, 2021.The Decor Kart today announced ‘End of Season Sale’ starting from 12th August 9 p.m. with 40% off on every product displayed online and
06-05-2019 | Business, Economy, Finances, B …
Global Market Insights, Inc.
Edible Flakes Market Statistics 2019-2024 | General Mills, Nestlé, August Oetke …
Global Market Insights, Inc. has added a new report on Edible Flakes Market that provides a comprehensive review of this industry with respect to the driving forces influencing the market size. Comprising the current and future trends defining the dynamics of this industry vertical, this report also incorporates the regional landscape of market in tandem with its competitive terrain. Edible flakes market is divided into product and distribution channels. Based on
05-08-2019 | Business, Economy, Finances, B …
Global Market Insights, Inc.
Edible Flakes Market Growth Trends & Competitive Analysis by 2024 | General Mill …
An analysis of Edible Flakes Market has been provided in the latest report introduced by Global Market Insights, Inc. that primarily focuses on the market trends, demand spectrum, and prospects of this industry over the forecast period. Furthermore, the report provides a detailed statistical overview in terms of trends outlining the geographical opportunities and contributions by prominent industry share contenders. Increasing popularity of ready-to-eat food products will primarily boost the
09-12-2017 | Health & Medicine
MarketResearchReports.biz
Pregnancy and Health - US - August 2017
"The Report Pregnancy and Health - US - August 2017 provides information on pricing, market analysis, shares, forecast, and company profiles for key industry participants. - MarketResearchReports.biz" View Sample PDF : https://www.marketresearchreports.biz/reports/1312617/pregnancy-and-health-us-august-2017-market-research-reports.pdf The US continues to experience low birth rates. Despite this, pregnancy specific products that address the nutritional and physical needs of pregnant women continue to roll out. Pregnancy related attitudes and ailments will drive the need for functional products that
09-07-2017 | Advertising, Media Consulting, …
MarketResearchReports.biz
Tobacco Insights: August 2017
The Report Tobacco Insights: August 2017 provides information on pricing, market analysis, shares, forecast, and company profiles for key industry participants. - MarketResearchReports.biz" "Tobacco Insights: August 2017", is a monthly report by GlobalData which provides extensive and highly detailed information on the changing production and consumption patterns of the tobacco industry globally, encompassing new laws and regulations, company news, and changes in consumer behavior. It covers recent activities of the manufacturers
07-13-2016 | Arts & Culture
GALERIE FLUEGEL-RONCAK
Summer-Accrochage July – August 2016
GALERIE FLUEGEL-RONCAK, with a strong focus on Contemporary Art and Pop Art, will show various artworks of its classic collection of POP ART by Andy Warhol, Roy Lichtenstein, Keith Haring, Tom Wesselmann, Alex Katz, Mel Ramos and Julian Opie. On view will be original prints, drawings, paintings and sculptures. After the huge success of Christo`s „Floating Piers“ in June 2016 at Lago d'Iseo in northern Italy, we also have artwork by Christo
Comments about openPR
I can't but agree to the positive statements about your portal: easy to use, clear layout, very good search function, and quick editing!
Jens O'Brien, Borgmeier Media Communication