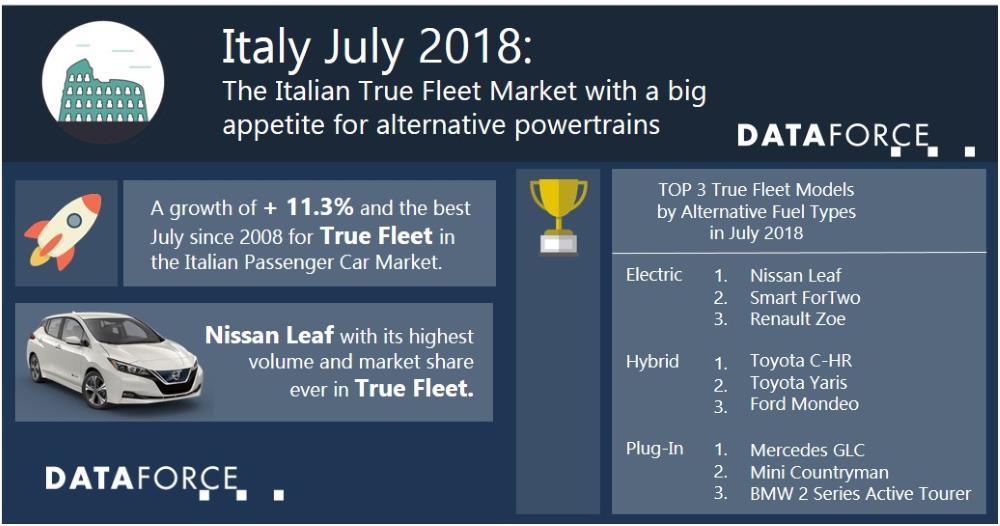 Following the moderate growth of 0.6% in June the Italian True Fleet Market was in very good shape in July which turned out to be the best July since 2008 with more than 29,000 passenger car registrations and a double-digit growth rate of 11.3%. The volume on both Dealerships/ Manufacturer (+6.6%) and Short-Term Rentals (+3.4%) increased over July last year while the growth for the Private market was slightly lower with “only” a +2.5%. Consequently, the Total Market (which had one working day more than in July ’17) achieved around 165,500 registrations and scored a surplus of 4.8%.Brand performance For Fiat the July was challenging with -3.9% and the third month in a row they lagged behind the registration volume of the respective month in 2017. But of course, Fiat stayed clearly in the lead. Volkswagen had a very positive month with +39.7% and jumped from rank number five into 2nd position followed by Audi, Mercedes, Ford (all in the red), Renault and BMW. Toyota (8th, +63.4%) gained two positions in the ranking. Especially the performance of the CH-R and the Yaris helped the Japanese brand to achieve a new record market share of 5.2%. Nissan even jumped from rank number fifteen to 9th with an outstanding +133.7%. Beside the SUV models Qashqai and X-Trail the Leaf was contributing significantly to Nissan’s success. This also had a strong impact on the fuel type shares overall in True Fleets but we will come to that in a minute. Alfa Romeo took the last spot in the top 10 with a gap of less than 60 registrations to Peugeot in 11th place. A bit further down the ranking Porsche is certainly worth to be mentioned. The manufacturer from Stuttgart was able to register its highest monthly volume in the Italian True Fleet Market up to now as the whole model range was above July 2017 (even if it was only a single one for the 911).Fuel type performance As mentioned above the full electric Nissan Leaf was a big surprise. 351 fleet registrations (most of them on Long Term Rental companies) were by far the highest monthly volume the Leaf ever achieved in Italy. Unsurprisingly it led the ranking of EV models followed by the Smart ForTwo and Renault Zoe who both had impressive growth rates as well. In total the share of full electric vehicles climbed to 1.7% in July. This is not only a new record for the Italian fleet market but also higher as in Belgium, France, Germany, Spain and UK. The appetite of Italian companies for Alternative powertrains was underlined by another record as Hybrids were also rocketing with more than 2,200 new registrations (+151.1%) and a share of 7.5%. Let’s see if this trend towards “green” fuel types will continue.(473 words; 2,682 characters)Publication by indication of source (DATAFORCE) and author (as listed below) onlyDATAFORCE – Focus on Fleets Dataforce is the leading provider of fleet market data and automotive intelligence solutions in Europe. In addition, the company also provides detailed information on sales opportunities for the automotive industry, together with a wide portfolio of information based on primary market research and consulting services. The company is based in Frankfurt, Germany.Richard Worrow Dataforce Verlagsgesellschaft für Business Informationen mbH Hamburger Allee 14 60486 Frankfurt am Main GermanyPhone: +49 69 95930-253 Fax: +49 69 95930-333 Email: richard.worrow@dataforce.de www.dataforce.de

12-30-2010 | Science & Education
Scuola Leonardo da Vinci
Italian language Certifications with AIL
The AIL (Accademia Italiana di Lingua) is a non-profit association of schools and educators that was founded in 1984 to foster a program of certification in the Italian language. The certifications offered correspond to and reflect all the levels of communication recognized by the European Portfolio (ELP). Scuola Leonardo da Vinci, with centres in Florence, Milan, Rome and Siena, is a founding member of the AIL and offers preparatory courses for
12-18-2010 | Fashion, Lifestyle, Trends
Composit
Modern Italian Kitchens
Kitchens of life are the italian kitchens realized by Composit. Composit philosophy is orientated to the production of kitchens that last year after year. Every Kitchen comes from an aesthetic sought and functional interpretation of several lifestyles, with a design that goes beyond the fashion. The modern italian style of the kitchens is unmistakable. Composit pursues two important goals: development of quality by following the needs and changes of society; guarantee reliability
06-01-2010 | Science & Education
Scuola Leonardo da Vinci
Italian Language Summer Courses 2010
Scuola Leonardo da Vinci is located in four of the most beautiful Italian towns: Florence, Rome, Milan and Siena. Teachers and staff are professional and long experienced, the organization well geared to meet all the needs and expectations of students of any nationality. Therefore, the Leonardo schools are recognized among the most prestigious in Italy. They offer not only group or individual language courses at any level, but also courses of
01-25-2010 | Science & Education
Scuola Leonardo da Vinci
Preparatory Courses to Italian Universities
A large number of students coming from all over the globe come to Italy every year to start their University studies. These students have a big need to learn Italian or else it would be very hard for them to pursue their field of study since the major part of Italian universities require the students to take and pass an entrance exam especially if the students is thinking to enroll
01-20-2009 | Science & Education
Scuola Leonardo da Vinci
Learning Italian to access to Italian Universities
The School Leonardo da Vinci, for many years now engaged in Italian language teaching for foreigners, offers all the guys who decided to face their University studies in the Italian country, the chance to prepare themselves at best to stand the entrance test of the University faculties of Architecture and Medicine, in Rome and Milan. “The Preparatory Course for Italian University” has a duration which varies between 2 and 24
12-10-2008 | Science & Education
Scuola Leonardo da Vinci
Italian Fashion Courses in Milan
The Italian language school for foreigners Leonardo da Vinci in Milan dedicates to all the guys who are fans of fashion but most of all of “made in Italy”, a special course: Fashion Show. For the first time in Italy, in fact, a school for foreigners suggests to guys a peculiar way to learn Italian, especially Italian for fashion. Thanks to the course Fashion Show, the guys will find themselves in close
Comments about openPR
9 o'clock: discuss press release with client, 10 o'clock: submit release to openPR, within the briefest possible time release is published and displayed in a prominent place on openPR.de. I am thrilled!
Zehra Spindler, Calypso Now! - Communication Agency