20 is the magic number for the Spanish True Fleet Market 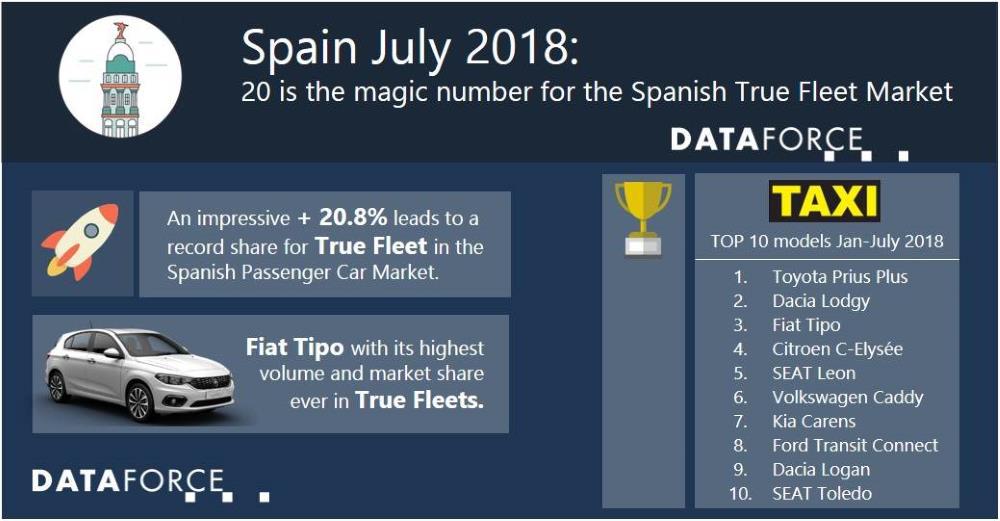 With +20.8% in July the True Fleet Market in Spain scored a growth rate of more than 20% for the third time in 2018. And it was even the third time in a row that this segment outperformed the Private Market (+10.2% in July). Consequently, the share of True Fleets for January to July 2018 is higher than ever before in Spain with 20.1% (20 seems to be the magic number). Fleet obviously matters more and more. Since business on Rental companies, Dealerships and Manufacturers also increased significantly (+36.1%) the Total Market achieved a surplus of 18.6% in July and only just missed 137,000 new car registrations.Brand performance The month of July showed some quite extreme results within the top 10 brands. Not so much regarding position changes but more in terms of growth rates. The two brands in front, Volkswagen and Renault, both had particularly bright results with +60.1% and +70.6% respectively. Since February their fleet volume has been climbing month by month. Audi in 3rd place had a strong result as well with +23.8% but the advantage over Toyota in 4th place was marginal with only 6 (!) units separating the two. Toyota had an outstanding performance, increasing its volume by 112.4% and gaining eight positions. The biggest push came from the Auris (for the second month in a row), ranking 2nd in the Compact Car segment (July 2017 rank number 10) behind the Renault Megane.Another big improvement within the group of Compact passenger cars came from a model of the Italian variety. The Fiat Tipo jumped from rank number 9 into 6th position with a growth of +111.8%, recording both its highest volume and market share in the Spanish True Fleet Market up to now. This wasn’t however enough to improve Fiat’s position in the OEM ranking.Nissan had to face a drop by 15.3% and ended up in 5th position (No. 1 in July 2017) followed by Peugeot, SEAT and BMW. Mercedes and Ford completed the top 10 but the July was pretty hard for both with -30.0% and -26.2% respectively.Fuel Type performance In most of the European countries Diesel is losing ground against Petrol and it’s the same in Spain: in July Diesel’s market share was down by 12.8 percentage points (pp) while Petrol gained 6.1 pp. And the success of Auris (sold only as Hybrid in Spain) and Tipo mentioned above also reflects in the fuel type results. The Hybrid share climbed from 5.0% (July 2017) to 9.3% which is the second highest value ever. And the share for CNG/LPG in combination with Petrol even jumped from 0.4% to 2.7% which is a new record in the Spanish True Fleet Market. The biggest part of the growth of Bivalent powertrains came in fact from the Fiat Tipo (more than 80% of Tipos were equipped with the 1.4T Bifuel engine) but SEAT (Ibiza, Leon) and Dacia (Dokker, Lodgy) also contributed significantly to this upswing.Taxi, please! As you might have heard there was a big taxi strike in Spain in the beginning of August which lasted for six days. It started when taxi drivers in Barcelona began a protest against a court ruling that rejected local rules on the issuing of “VTC” licenses to ride-hailing firms. While traditional taxi drivers in Spain have to make significant investments in their licenses, VTC (tourism vehicle with chauffeur) licenses are much cheaper. The country’s national taxi association, Antaxi, said the government has now agreed that drivers on platforms such as Uber or Cabify should get only one operating license for every 30 given to regular taxi drivers.Which models are the most preferred in the Spanish Taxi Market? For the first seven months of 2018 the ranking is led by the Toyota Prius Plus followed by the Dacia Lodgy. The biggest improvement was achieved by the Fiat Tipo which more than doubled the volume it achieved from January to July 2017 and jumped from rank number 12 into 3rd position. Overall Taxi registrations increased by 17.0% in July and 11.0% for the first seven months.And there is another specialty around this market segment: its appetite for alternative fueltypes. Both the share of Hybrid powertrains and bivalent is striking. With 27.7% year-to-date the Hybrid share is more than three times as high as in True Fleets in total (8.0%). And the bivalent share of 1.8% in fleets is nowhere near to the one for Taxis (19.8%).(750 words; 4,286 characters)Publication by indication of source (DATAFORCE) and author (as listed below) onlyDATAFORCE – Focus on Fleets Dataforce is the leading provider of fleet market data and automotive intelligence solutions in Europe. In addition, the company also provides detailed information on sales opportunities for the automotive industry, together with a wide portfolio of information based on primary market research and consulting services. The company is based in Frankfurt, Germany.Christian Spahn Dataforce Verlagsgesellschaft für Business Informationen mbH Hamburger Allee 14 60486 Frankfurt am Main GermanyPhone: +49 69 95930-265 Fax: +49 69 95930-333 Email: christian.spahn@dataforce.de www.dataforce.de