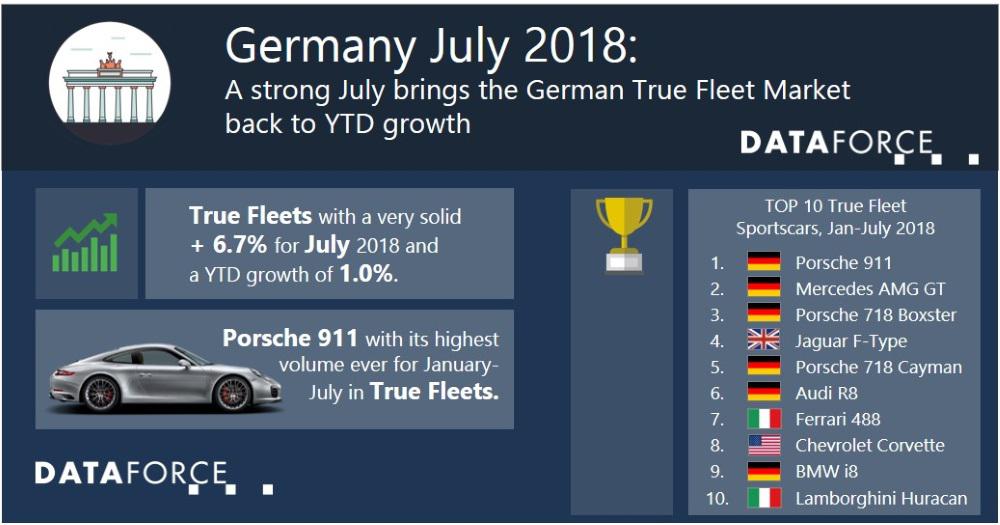 In July 2018, the German passenger car market grew by an impressive +12.3% which is the highest growth rate in 2018 up to now. Let’s have a closer look where this drive is coming from. The Private Market was certainly in very good shape with a +16.1% over July 2017. This is at least partly based on the prolongation of attractive offers by the OEMs for private customers replacing their older Diesel cars. Registrations on Rentals, Dealerships and Manufacturers increased by 12.4% while their cumulated result for July is still negative. And True Fleets? After two relatively weak months the July showed a more than solid +6.7% which brought the fleet channel back to a year-to-date growth of +1.0%.Brand performance With a remarkable 24.2% increase of registrations VW expanded its lead and achieved a market share of – guess what – 24.2%! Funny coincidence. Generally, the Volkswagen group had a very strong July: Audi +11.4% (ranking 2nd), Škoda +13.6%, Porsche +58.0% and SEAT +46.2%. At 3.7% the Spanish brand even scored a new record market share in the German True Fleet Market. All SEAT models – except the Van Alhambra that is losing ground to SUVs – achieved double-digit growth rates in July. The all-new Arona ranked second within the brand behind the Leon and is already number three in the Small SUV segment behind Volkswagen T-Roc (also just recently introduced) and Renault Captur, leaving a lot of established competitors like Opel Mokka or Ford Ecosport behind.Volvo showed an impressive performance as well ranking 10th for the second time in a row with a +38.0%. This success was based on two pillars: the new XC40 and especially the second generation of XC60 which more than doubled its volume over July last year. Within the group of Medium sized SUVs the Swedish contender ranked fourth behind Mercedes GLC, Audi Q5 and BMW X3, as the best non-German model in its segment.In case you are slightly annoyed by all the headlines about the ongoing success of SUVs, there is a sign of hope for you: While of course, the Cayenne significantly helped Porsche to accomplish its increase by no less than +58.0% there is no doubt that the Sportscar 911 is worth to be mentioned as well as it scored a plus of 77.1%. And July wasn’t an exceptional case as the year-to-date result is also more than positive with +56.7%. 2018 is the first year in which the nine-eleven achieved a volume of over 2,000 new registrations in the first seven months. It seems that the current 991 generation of Porsche’s icon Sportscar will have a remarkably strong finish before the new generation will hit the markets in the near future.The relevance of top sellers Up to now the 911 accounts for 35.4% of Porsche’s True Fleet registrations in 2018 while the Cayenne represents a share of 23.6%. This results in a 12 percentage points (pp) gap between the top seller and the second-best model. It’s quite representative as the average gap is 12.3 pp across the top-20 manufacturers. At Renault the lag between their top seller Captur and the Megane in second place is less than 40 registrations for January to July. With the shares of Golf and Passat being only 1.1 pp apart it is a closer battle between VW’s top sellers.The situation is completely different for MINI or Mazda. Of course, the limited model range has an impact here, especially regarding MINI. Mazda and Škoda might be more appropriate examples. 48% of the fleet registrations of the brand from Hiroshima are CX-5, followed by CX-3 and Mazda 3 both scoring a 13% share. Škoda is still very much depending on its top seller Octavia which accounts for 43% of their registered passenger cars on fleet customers while in contrast to Mazda the dominance of the number 1 model is decreasing for the Czech manufacturer due to the expansion of their SUV model range. In 2018 Kodiaq and Karoq have already accounted for a combined share of 23% and it surely will climb further until the end of the year.(693 words; 3,963 characters)Publication by indication of source (DATAFORCE) and author (as listed below) onlyDATAFORCE – Focus on Fleets Dataforce is the leading provider of fleet market data and automotive intelligence solutions in Europe. In addition, the company also provides detailed information on sales opportunities for the automotive industry, together with a wide portfolio of information based on primary market research and consulting services. The company is based in Frankfurt, Germany.Gabriel Juhas Dataforce Verlagsgesellschaft für Business Informationen mbH Hamburger Allee 14 60486 Frankfurt am Main GermanyPhone: +49 69 95930-250 Fax: +49 69 95930-333 Email: gabriel.juhas@dataforce.de www.dataforce.de