The UK True Fleet back in the black with a surplus of 1.4% in July 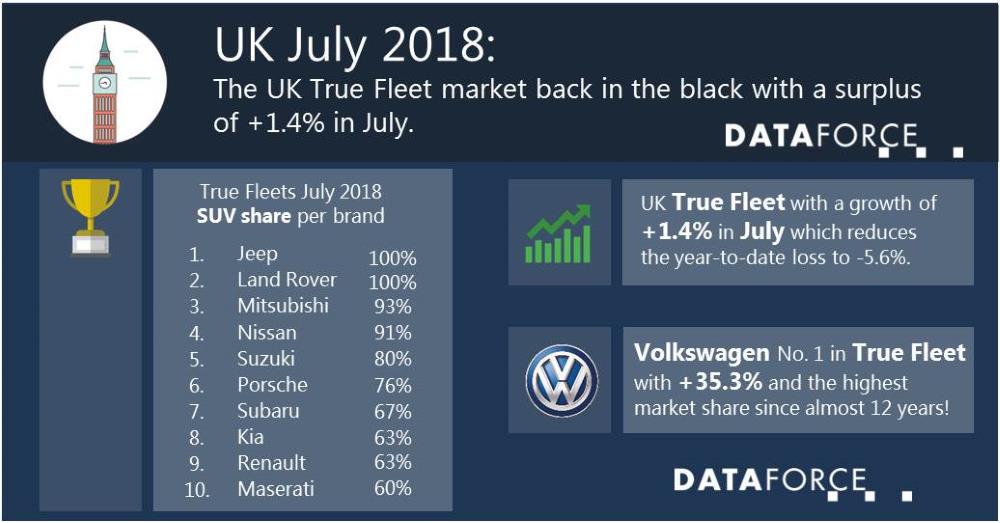 While in June the UK True Fleet Market finished in the red by only 29 registrations July showed a growth of +1.4%. This positive result helped to reduce the year-to-date loss to “only” 5.6%. No reason yet for overwhelming enthusiasm (especially if you consider the buoyant development in the other big European Markets) but certainly an encouraging trend taking into account that the YTD decrease was still -12.7% in March. The Private Market scored a marginal growth of 0.1% over July 2017 and Special Channels increased by 2.8% thanks to the self-registrations on Dealerships and Manufacturers. The Total Market overall almost reached 164,000 registrations for July which equates to a +1.2%.Brand performance Within the top 10 we saw 50% of the brands with positive numbers and 50% with, let’s say challenging results. Volkswagen showed a remarkably good performance with +35.3% and a market share of 12.8% which is the highest since August 2006! The main pillars for the success of the brand from Wolfsburg were the Golf, the all-new T-Roc (already in the top 10 of Small SUV) and especially the Tiguan which achieved an all-time high in market share in July. Vauxhall (Opel) in 2nd, Ford and Mercedes all had to suffer while Audi (5th, +4.9%) and BMW (6th, +9.4%) both achieved a more than solid increase although this didn’t result in gaining positions in the ranking. Nissan retained their 7th position while SEAT had an impressive +30.8% jumping from rank number 12 into 8th position. A similar improvement was achieved by Peugeot climbing up the ladder by three positions into rank number 10 behind Kia. And the biggest volume growth in absolute figures within Peugeot came - surprise, surprise - not from an SUV but from the Compact Car 308.Segment performance The biggest absolute rises in July both by volume and by percentage growth came unsurprisingly from the group of Compact and Small SUV respectively. With 22.8% the share of the SUV Compact segment reached a high never seen before in the British True Fleet Market. Strongest player in July (and year-to-date as well) was the Nissan Qashqai followed by Volkswagen Tiguan and Ford Kuga. With the Grandland X from Vauxhall in 6th place and the Karoq from Škoda (10th) there were two new entries in the top 10.Within the Small SUV the best newcomer was even able to jump into second place behind the segment leader Vauxhall Mokka. And this is the SEAT Arona. Obviously, this is the right product at the right time for the brand from Martorell. In July the Arona was No. 2 within the model range of SEAT behind the Leon and even their No. 1 for “True Private”.SEAT is actually a good example for the increasing relevance of SUVs; not “only” in general but also within the OEMs. Until August 2016 the SUV share at SEAT was exactly zero. This has changed dramatically with the introduction of Ateca and Arona: in July the share was no less than 37% in the True Fleet Market! Across the top 25 brands in July SUVs accounted for 40.9% registrations compared to 32.9% in July last year. And you might be surprised how many manufacturers turned into “SUV brands” in the meantime. Or did you expect a share of more than 40% at Vauxhall? Or 59% and 63% at Peugeot and Renault respectively? Another example is Jaguar where almost every second car registered on fleet customers in this month was an SUV (E-Pace, F-Pace). There are only very few OEMs where it was the other way round, i.e. that recorded a decline in their SUV share. Nissan is one of them due to a declining volume of the Juke, a model which will be replaced next year and is therefore getting closer to the end of its lifecycle. But despite this situation their SUV share was still 91% and only beaten by SUV specialists such as Mitsubishi, Jeep or Land Rover.(666 words; 3,785 characters)Publication by indication of source (DATAFORCE) and author (as listed below) onlyDATAFORCE – Focus on Fleets Dataforce is the leading provider of fleet market data and automotive intelligence solutions in Europe. In addition, the company also provides detailed information on sales opportunities for the automotive industry, together with a wide portfolio of information based on primary market research and consulting services. The company is based in Frankfurt, Germany.Michael Gergen Dataforce Verlagsgesellschaft für Business Informationen mbH Hamburger Allee 14 60486 Frankfurt am Main GermanyPhone: +49 69 95930-231 Fax: +49 69 95930-333 Email: michael.gergen@dataforce.de www.dataforce.de

You can edit or delete your press release The UK True Fleet back in the black with a surplus of 1.4% in July here