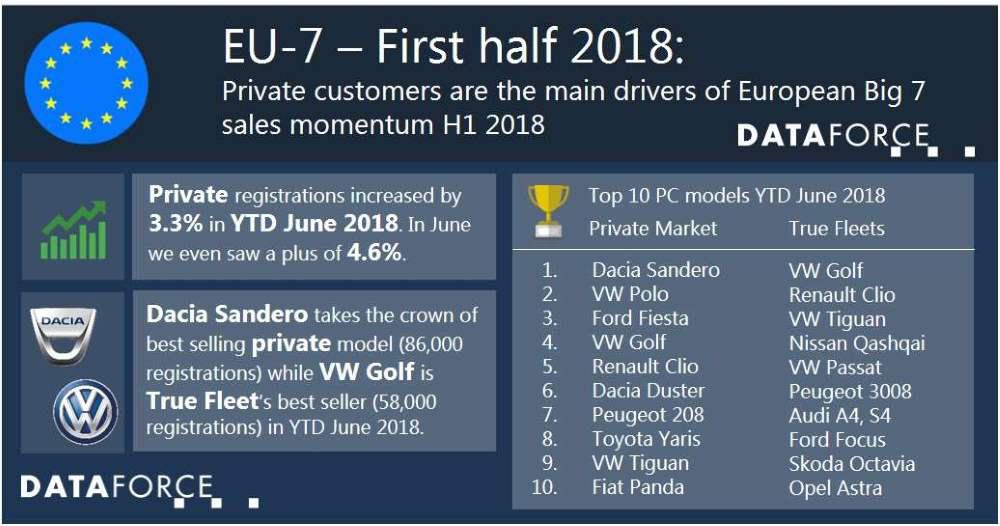 In a turbulent environment with trade wars arising and import duties sky-rocketing, what are the European car buyers in the main EU-7 markets doing? Are they still opting for new cars? Yes, they are. For PC and LCV registrations the EU-7 Total Market increased by 2.3% in June while the cumulated increase for the first half of the year was 1.7%. Italy (- 1.3%) and UK (- 5.7%) were below 2017’s YTD (year-to-date) June registrations, but this was compensated by gains in France (+ 4.7%), Germany (+ 3.0%), the Netherlands (+ 11.2%), Belgium (+ 2.4%) and specifically Spain (+ 9.9%).Customer type It appears to be mainly private customers having driven the growth with them registering 3.3% more cars in the first half of the year and with June 2018 even posting a plus of 4.6%. True Fleets were almost stable over June (+ 0.6%) and rose by 1.8% over the first half of the year. Lots of people will also take a rental car this holiday, as the month June saw an increase of 9.0% in short-term rental car registrations.Brands - private buyers Regarding the Private Market, the brand that has been doing particularly well in the first half year was VW, with a plus of 21.2% driven mainly by the Golf and the recently launched T-Roc. Dacia has also been doing very well with a + 14.2% thanks to the new generation of the Duster. Other noteworthy winners are Hyundai (+ 13.5%), SEAT (+ 25.6%) and Skoda (+ 21.6%) with all of them benefitting from new entries into the crossover segment. And what was the best-selling private car over the first six months of 2018? It was the Dacia Sandero with 86,000 private registrations and if Dacia keeps its momentum over the second half of the year, they will probably reach number 5 brand position for the private channel, which would be their best result ever!Brands - True Fleet buyers Peugeot’s crossovers 3008 and 5008 are winning over the hearts of the fleet owners as they propelled the French brand to a 10.3% increase in True Fleets over YTD June. Regarding fleet’s top 20 marques, the gain was even bigger at SEAT increasing by 28.0% propelled by the new Arona and the Leon, despite being in its sixth year of sales already. The third brand standing out notably was Kia that had some successful months as well growing by 13.5% and thus achieving a new record fleet market share of 1.5% in YTD June 2018Fuel types Diesel was continuously losing share in favour of petrol and electrified engines across all countries with an overall drop of - 13.3% in registrations in the first half of 2018. However, regarding True Fleets, we see that business customers have kept their main appetite for the diesel engines with registrations falling only slightly in France and the Netherlands while they even posted a small surplus in Italy and Spain.In contrast to diesel, full electric vehicles were on the rise over the first six month of the year, and specifically in the True Fleet Market (+ 57.5%), with the Renault Zoe being ranked 1st for both the Private and True Fleet model ranking ladder.(535 words, 3,025 characters)Publication by indication of source (DATAFORCE) and author (as listed below) onlyDATAFORCE – Focus on Fleets Dataforce is the leading provider of fleet market data and automotive intelligence solutions in Europe. In addition, the company also provides detailed information on sales opportunities for the automotive industry, together with a wide portfolio of information based on primary market research and consulting services. The company is based in Frankfurt, Germany.Julian de Groot Dataforce Verlagsgesellschaft für Business Informationen mbH Hamburger Allee 14 60486 Frankfurt am Main GermanyPhone: +49 69 95930 329 Mobile: +49 173 438 1586 Email: julian.degroot@dataforce.de www.dataforce.de