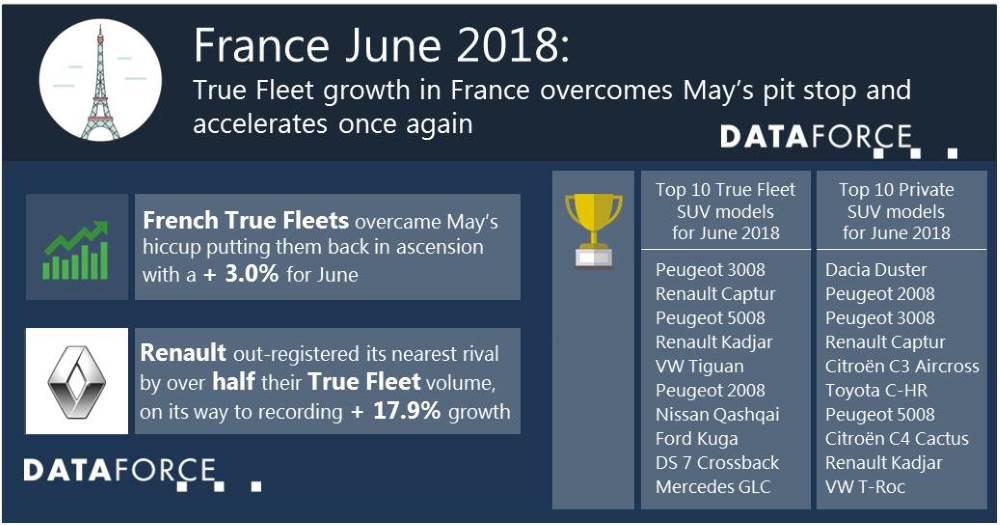 True Fleet in France is once again in the black in terms of growth as it puts last month’s loss into the rear view mirror. June saw a + 3.0% for the fleet market, putting it back on track with the YTD (year-to-date) sitting at a healthy + 6.0%. Private and Special Channels also saw themselves on the positive side of the fence with a + 5.7% for the former and + 19.9% for the latter. This all equated to the Total Market finishing just above 252,000 registrations or + 9.2% in terms of growth leaving the French market looking buoyant and positive moving into the second half of 2018.Brand performance For June the expansion or contractions in terms of growth from the OEMs were evenly split. Unfortunately, in all but one case, the contractions were of the double-digit variety and for three of these OEMs this has combined to leave them YTD also in the red (more on this a little later). The first four ranks did not change for June, Renault (+ 17.9%) was once again 1st and separated from Peugeot in 2nd by a significant margin, actually of over half the latter’s volume. Which models produced the largest registration uptick? It was of course the stalwart Clio, up by 24.3%, and the Captur, doubling last June’s registrations (+105.6%). Both Citroën (3rd) and VW (4th) had very similar months in terms of growth, with the former achieving + 4.7% and the latter + 4.6%. Citroën’s success came from the C3s (C3 and C3 Aircross) while it was two SUVs for VW (Tiguan and T-Roc). It is at this point we start to see the double-digit drops; BMW, Ford, Audi and Mercedes all suffered in June with the OEM from Stuttgart taking the hardest hit in terms of negative growth (- 31.8%). This leaves the last two places in the top 10 and, fortunately, both had good months. Toyota in 9th produced a + 19.7% which came thanks to the Yaris and C-HR while for Fiat (+ 22.1%) the 500 and 500X were the Turin manufacturer’s stars for June.Are we starting to see the effects of WLTP? As mentioned earlier in June’s press release the three premium brands of Mercedes, BMW and Audi have all contracted by double digits in June and a further look into the data reveals that YTD they all currently reside in the red. The same cannot be said of their closest rivals in Volvo (+ 13.8%) or Land Rover (+ 16.9%) whose growths are firmly in the black; though it must be pointed out that the volume of these two OEMs in comparison is significantly less but the gap is obviously closing somewhat. Now while Audi and BMW had both dropped some registrations in 2017 over 2016, Mercedes was in ascension, and this trend has also appeared in some of the other EU-7 markets. All three brands had new models entering the marketplace over this time period and some good to great success for BMW and Mercedes from their PHEV models. This had lead us to believe that there is some upcoming pressure from the NEDC to WLTP change and the resulting increase to announced CO2 values. Add this to the somewhat bespoke nature of the models (option configurations) available for these particular premium brands and this may be what is currently suppressing their growth potentials.(564 words; 3,142 characters)Publication by indication of source (DATAFORCE) and author (as listed below) onlyDATAFORCE – Focus on Fleets Dataforce is the leading provider of fleet market data and automotive intelligence solutions in Europe. In addition, the company also provides detailed information on sales opportunities for the automotive industry, together with a wide portfolio of information based on primary market research and consulting services. The company is based in Frankfurt, Germany.Gabriel Juhas Dataforce Verlagsgesellschaft für Business Informationen mbH Hamburger Allee 14 60486 Frankfurt am Main GermanyPhone: +49 69 95930-250 Fax: +49 69 95930-333 Email: gabriel.juhas@dataforce.de www.dataforce.de