The German True Fleet Market dips slightly into the red 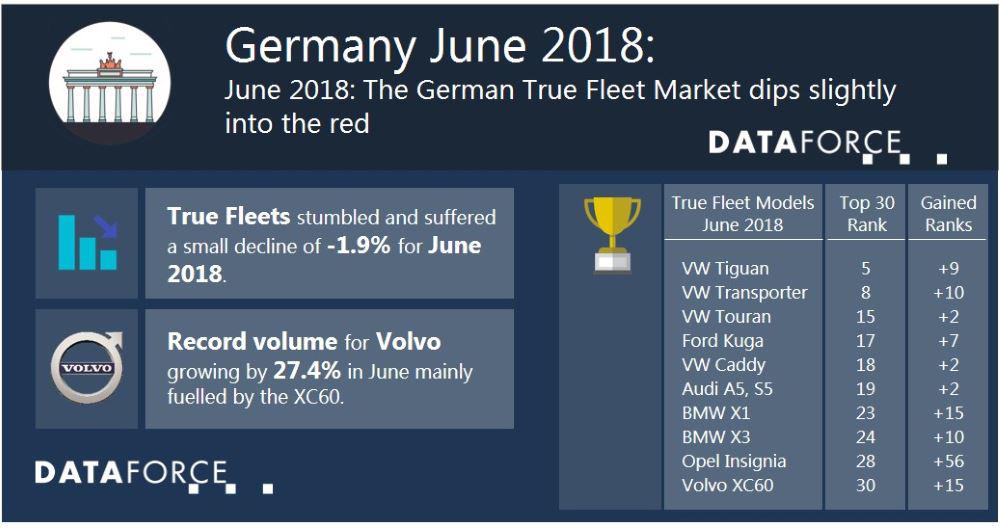 The 2018 German True Fleets roller coaster ride has seemingly started already with the ups and downs over the recent months, leaving YTD June somewhat stagnate and missing the prior year’s respective volume by just 0.03%. The True Fleet Market was in the red for June as well falling short of corresponding 2017’s numbers by 1.9% despite the overall upward trajectory of the Total Market (+ 4.2%). This upswing was mainly driven by the Private Market (+ 9.8%) but Special Channels were also in the plus (+ 2.7%) contributing a few of their own registrations.Brand performance Regarding fleet’s top 10 brands, there seems to be only two options in June, either to decline or to post some robust double-digit growth rates (with only one exception). Volkswagen (1st) and Audi (2nd) retained their positions while their compatriots BMW in 3rd and Mercedes in 4th swapped ranks due to a small increase of the Bavarian manufacturer (the exception of June’s growth rule). Then again, the next five marques all kept their positions from June 2017’s ranking with Skoda in 5th and Ford in 6th. From rank 7, it was the time of the monthly growth stars to enter the stage with all of them achieving growth rates ranging between 23% and 35%. The first one is Opel increasing by 23.4% with the Insignia and the Corsa taking a large share of the growth pie. Renault (8th) was up by 35.4% with a broad range of models participating in this growth. The same is true for Seat (+ 25.8%) with the Alhambra being the only model which had to suffer a decline in June while the new Arona gives some further tailwinds to the Spaniards. Last but not least, Volvo rounded out the top 10 by gaining three positions (+ 27.4%) in comparison to the corresponding prior year’s June ranking. Surprisingly, it was not the XC40 mainly fuelling Volvo’s performance. The bigger XC60 had a rather buoyant month and increased by 79.9%, which led to Volvo’s best True Fleet month ever regarding the absolute registration volume.Model ranking While the Volvo XC60 could not climb up the internal brand ranking as it was already Volvo’s best seller in June 2017, it could win significantly some positions within the overall monthly True Fleet model ranking. Supported by the very successful month, the Volvo’s midsize crossover climbed up by 15 positions to rank 30th within fleet’s model ranking. Another highlight was the already mentioned Opel Insignia even jumping from position 84th to 28th growing by stellar 263.3%. The BMW X1 was another SUV with a sound performance, rocketing up by 86.5% and climbing from rank no. 38 to 23 while its bigger brother X3 expanded by 68.4% finishing 24th after gaining 10 positions over June 2017. Moreover, Volkswagen and Ford were also on the sunny side of jumping up the ranking list with the Tiguan (5th) and the Transporter (8th) gaining 9 and 10 positions respectively while Ford’s Kuga grew robustly by 43.0%, which led it into 17th position.Interestingly, for all of these models (except the Ford Kuga) it was not only the Petrol registrations that went up. Diesel engines were also positive with a fairly high demand in addition to a smaller plus of Plug-In Hybrid registrations for the XC60, and this was in spite of an overall decline of Diesel (- 16.3%) in True Fleets over June once again.(568 words; 3,299 characters)Publication by indication of source (DATAFORCE) and author (as listed below) onlyDATAFORCE – Focus on Fleets Dataforce is the leading provider of fleet market data and automotive intelligence solutions in Europe. In addition, the company also provides detailed information on sales opportunities for the automotive industry, together with a wide portfolio of information based on primary market research and consulting services. The company is based in Frankfurt, Germany.Nils Wehner Dataforce Verlagsgesellschaft für Business Informationen mbH Hamburger Allee 14 60486 Frankfurt am Main GermanyPhone: +49 69 95930-295 Fax: +49 69 95930-549 Email: nils.wehner@dataforce.de www.dataforce.de