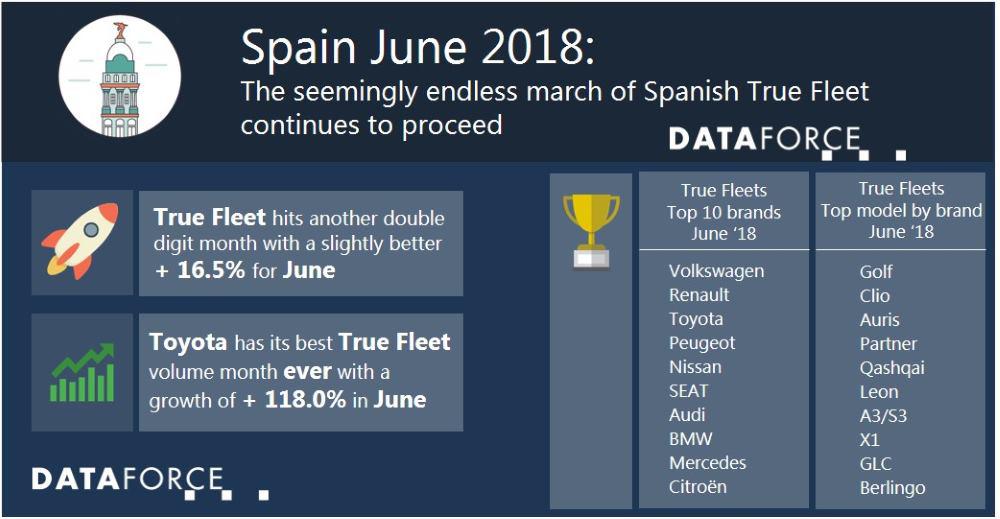 The Spanish True Fleet Market continues to expand at a double-digit rate, June delivered the second +16% in a row though it was a little higher this month with a +16.5%. Much the same as the Italian market last year the question is perhaps when will the market level out or find equilibrium? Well according to our Forecast analysts this may be around the corner. Elsewhere in the market, we see the Private channel remaining positive though at a much more subdued +1.4% after last month’s +12.3% and somewhat predictably we now see the opposite coming from the “tactical” Special Channels with this month a +12.9% while last month was a -1.9%. Brand performance It seems most of the top 10 appear to be reaping the benefit of another month of double digits with only two OEMs not achieving a positive June. VW re-took the #1 spot it lost to Renault last year with a sturdy growth of 38.4% with the French manufacturer dropping one place into 2nd. Toyota had a truly exceptional month not only having the highest growth inside the top 20 with a plus of 118.0% but they also recorded their best month ever in the True Fleet Market, the next closest month in volume being way back in December 2007. Which models? Well, C-HR and Rav4 both upped their game but it was the Auris that was Toyota’s shining star out-registering the combined figures of C-HR and Rav4 by almost double. Interesting to note is the fact that Hybrids accounted for 88.3% of the brand’s registrations in June and YTD (year-to-date) it is 81.0%, with this YTD figure up by 17.7 percentage points over YTD June 2017. Peugeot in 4th retained its position while Nissan in 5th was the highest mover other than Toyota moving up from 9th. SEAT in 6th and Audi in 7th were the OEM’s that didn’t capitalise on the growth, with BMW, Mercedes and Citroën following in the ranking to complete the top 10. Outside the top 10 Kia in lucky number 13 position also had a noteworthy month up 51.6%, thanks mostly to the Stonic but Optima also upped its game with a +253.6% growth and Sportage as #1 seller for its brand also managed +46.5% to further help out. Short-Term Rental Performance With the summer in full swing, we decided to take a look into the Short-Term Rental (STR) market YTD on a regional level. Given the main users of the STR market being tourists, it is no surprise that lots of the tourist destinations feature high on the list, though it is Madrid that tops the list of most STRs registered. This phenomenon though is probably more due to rental companies’ head offices being located in the capital leading to almost three times more passenger cars registered there than in Alicante, Madrid’s nearest volume rival. However in terms of YTD growth in absolute volumes it is the traditional tourist destinations that are taking on extra registrations, Baleares lead having grown by 24.0% over YTD June 2017, followed by Alicante with 10.5%, Malaga has doubled its volume with a 103.8% growth and Las Palmas de Gran Canaria have pushed up 21.6%. So what are the most popular models in these regions? Top 5 are as follows: VW Polo, Opel Corsa, Opel Mokka, Fiat 500 and the Seat Ibiza. So, while Opel and Fiat are somewhat further down the list in the other market channels they are #1 and #2 in the overall Spanish STR channel YTD.(594 words; 3,308 characters)Publication by indication of source (DATAFORCE) and author (as listed below) onlyDATAFORCE – Focus on Fleets Dataforce is the leading provider of fleet market data and automotive intelligence solutions in Europe. In addition, the company also provides detailed information on sales opportunities for the automotive industry, together with a wide portfolio of information based on primary market research and consulting services. The company is based in Frankfurt, Germany.Christian Spahn Dataforce Verlagsgesellschaft für Business Informationen mbH Hamburger Allee 14 60486 Frankfurt am Main GermanyPhone: +49 69 95930-265 Fax: +49 69 95930-333 Email: christian.spahn@dataforce.de www.dataforce.de