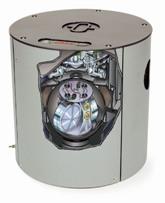 The market leader for gyro compasses is equipped with new features: Anschütz Standard 22

Raytheon Anschütz has now introduced new features for its Standard 22 gyro compass. Among the new features the most important improvements are independent transmitting magnetic compass and individual speed error correction functions. With increased failure safety and flexibility further value is added to the world’s most popular gyro compass. Standard 22 will now be equipped with a modified distribution unit, which is enhanced by an independent transmitting magnetic compass (TMC) path. Thus, a failure in the distribution unit or even in the compass system will not affect the processing of the magnetic compass heading. This enhancement ensures that the steering repeater would be switched automatically to magnetic heading in a situation of lost gyro compass heading. With this function, various flag state authorities do not require an optical bypass for the magnetic compass on board of the vessel. According to Olav Denker, the independent transmitting magnetic compass function of Standard 22 will not only increase standards of safety, but will also offer economical benefits: “Thanks to the new feature, no separate TMC unit will be required and the yard does not have to install an optical bypass for the magnetic compass. This saves costs for the ship owner and installation time for the yard.”In addition to well-proven manual and automatic speed error correction modes, the new Standard 22 will also offer an individual speed error correction mode. In a double or triple gyro compass systems it will be possible to input speed and latitude information directly into the Standard 22. This means that speed and latitude from more than one speed log / GPS receiver are used for speed error correction at the same time. The benefit is that in case of a speed or latitude error the speed error correction of only one Standard 22 is affected. Subsequent systems such as Dynamic Positioning Systems are able to detect a heading error caused by incorrect speed and position data. Therefore, the additional construction of speed and position data processing is a major contribution to increased failure safety and detection. Since the Standard 22 gyro compass was introduced to the market, Raytheon Anschütz has sold more than 7,700 gyro compasses of this type. With the release of the new features, the company expects to strengthen its position as the market leader for gyro compasses. Olav Denker, who is Product Manager for gyro compasses at Raytheon Anschütz, states: “With the new released features we make sure, that Standard 22 fits perfectly in new applications and also fulfils future requirements. The safety of the compass and of subsequent systems is significantly increased.” With regard to environmental requirements it should be also important to point out, that Anschütz gyro compasses operate without use of mercury since more than one hundred years.Standard 22 is available in various configurations, ranging from a double or triple system with possible integration of further heading sensors to an efficient solution especially for retrofit purposes. All Standard 22 gyro compasses are equipped with the patented data transmission technology that completely replaces the use of slip rings and offers increased operational safety. Standard 22 gyro compass solutions are type approved for high speed crafts.Raytheon Anschütz has delivered more than 600 customized Integrated Bridge Systems for commercial and naval ships as well as for demanding offshore applications. The company has a broad range of own products, which covers e.g. gyro compasses, autopilots and steering control systems, radars and electronic sea charts (ECDIS). Raytheon Anschütz cares for its systems on board of more than 25,000 vessels worldwide and maintains a service network with more than 200 service stations alongside the most important shipping routes of the world. Raytheon Anschütz is a subsidiary of the Raytheon Company (USA) and belongs to its Integrated Defense Systems division. Raytheon Anschütz was founded as Anschütz & Co. in 1905 and employs today more than 500 people at its headquarter in Kiel, Germany.Raytheon Anschütz GmbH Zeyestr. 16-24 D-24106 Kiel Germanywww.raytheon-anschuetz.comPress Contact: Martin Richter Marketing Support Manager Tel.: +49 431 3019 712 Fax: +49 431 3019 94712 E-Mail: martin_richter@raykiel.com