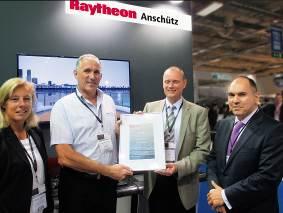 Raytheon Anschütz, a German-based world-leading navigation system supplier, delivers its 15,000th Standard 22 Gyro Compass in June 2014. Onboard the superyacht “Esmeralda” the jubilee compass will replace an old Anschütz Standard 4 Gyro Compass which has been in operation for more than 30 years.10 years ago the new generation of the Anschütz Gyro Compass – Standard 22 – was presented at SMM in Hamburg. In the following time the compass was successfully established in the market. Based on over 100 years of experience and a constant development in technology, the Standard 22 is known today for its highest accuracy and reliability during any environmental condition. Today, with about 1,800 sold compasses per year, the Standard 22 has become the world’s most popular gyro compass ever.The jubilee compass was sold through Aegean Electronics S.A., the exclusive distributor of Raytheon Anschütz in Greece, to the superyacht “Esmeralda”. To celebrate the jubilee an official ceremony took place during the recent Posidonia where a certificate was handed over to Aegean Electronics. Sven Dreyer, Sales Director at Raytheon Anschütz, said: “With the Standard 22 we are proud and happy to have a product, which has such a high acceptance in the market. In only a few years the Standard 22 became the most frequently sold compass, not only in the history of Raytheon Anschütz but all over the world.”All Anschütz Standard 22 Gyro Compasses stand out with a long gyrosphere lifetime and have a contact-free transmission of the gyro supply voltage and an optical signal transmission of the sensor data, which contributes to highest operational reliability and safety. Advanced functions like an independent transmitting magnetic compass as well as an individual speed error correction mode in double and triple compass systems continue to increase flexibility and reliability of the compass system. The Standard 22 is available in different system configurations from a single gyro compass for retrofit solution up to double and triple gyro compass system with redundancy in distribution for highest class notations and offshore service vessels with the possibility to integrate even more sensors such as the Horizon MF from Raytheon Anschütz. The “Esmeralda”, a 62 meter long superyacht, was built in 1981 by the Italian shipyard Codecasa. Aegean Electronics is responsible for delivery and commissioning of the Standard 22 Gyro Compass to the yacht.Raytheon Anschütz GmbH is a subsidiary of Raytheon Company and a leading supplier of Navigation Systems and Integrated Bridge Systems for all kinds of commercial vessels, specialized vessels, mega yachts, and naval ships. More than 30,000 vessels worldwide are sailing with Raytheon Anschütz navigation systems and are being served by a global network of own subsidiaries, e.g. in Shanghai, Singapore and San Diego, and more than 200 specialized service stations. In 1905, Raytheon Anschütz was founded under the name Anschütz & Co in Kiel, Germany, just one year after Dr. Hermann Anschütz-Kaempfe invented the gyro compass. More information: www.raytheon-anschuetz.comRaytheon Anschütz GmbH Zeyestr. 16-24 D-24106 Kiel Germanywww.raytheon-anschuetz.comPress Contact: Martin Richter Marketing Manager Marketing Communications Tel.: +49 431 3019 512 Fax: +49 431 3019 94512 E-Mail: martin_richter@raykiel.com