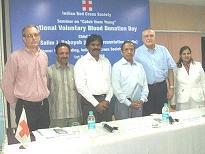 Donation of Blood is a gesture of Goodwill and Care for the fellow human beings. There is no Gift more valuable than this as it is actually a gift of life for the person who receives it. Blood is replaceable but a life is not ...... The slogan "Do Something Amazing - Give Blood" is taken seriously by the BITS Pilani community as Passion is the underlying force that fuels the strongest emotions here. On October 1st 2009, National Voluntary Blood Donation Day, Indian Red Cross Society - IRCS not only cheered the young donors to come forward and donate blood but also celebrated the elevation of its blood bank at NHQ as a model blood bank by NACO. This is the only blood bank outside the government fold to get into this privileged group. While in India just about 50% of the blood the country needs every year is met through voluntary donation, in China the voluntary blood donation has gone up from 45% in year 2000 to mind boggling 95% recently. It is to be remembered that age group 18-25 years comprises nearly 70% of all blood donors and it is this age group which dominates university enrollments also. The National Service Scheme (NSS) unit of Birla Institute of Technology and Science (BITS) Pilani Rajasthan India has been organizing for the past twenty eight years in the month of March every year a Blood Donation Camp in collaboration with Indian Red Cross Society. The choice of March month for blood donation at BITS Pilani is not arbitrary but due to the fact that there is always an increased demand for blood products during summer months as more children and adults are injured during this period more than at other times of the year and ironically the blood donations usually decrease during summer as most regular donors go on vacations and schools and colleges remain closed during this period. The NSS Unit of BITS Pilani has been able to bring this high level of motivation for blood donation among the Faculty and students year after year by various measures. The hostel which donates maximum units of blood gets a running shield and invariably senior officers of the Institute like the Vice Chancellor, Deans, Wardens, etc are the first to donate blood which itself inspires the younger generation. The camp is organized in very safe and secure environment in the campus with the help of IRCS, New Delhi which itself generates confidence among the donors. Indian Red Cross observed the day by organizing a seminar on the theme ‘Catch them Young’ at its Disaster Management Centre, New Delhi and also felicitated its regular donors and organizations partnering Red Cross in its blood campaign. Dr. Salim J. Habayeb, India Representative of World Health Organization (WHO), was the Chief Guest for the occasion. Mr. Tim Bray, Head, German Red Cross was the Special Guest. “IRCS has over eight million wide base of Youth Red Cross (YRC) spread across the country. We propose to start a motivational programme for youth. The aim is to initiate them into voluntary blood donation. We propose to catch them young so that they become our lifelong blood donors and end up being centurion donors. I exhort all youth above 18 years of age to enter their adulthood by becoming a blood donor as the gap in demand and supply of blood needs to be abridged. This shall be achieved by motivating and recruiting new breed of donors”, says Dr. S.P. Agarwal, Secretary General, IRCS. The moment of pride came when Indian Red Cross announced that BITS Pilani located in Rajasthan has been contributing for the voluntary blood donation camps organized under the supervision of IRCS, New Delhi for the past nearly three decades and for the year 2009 also BITS Pilani had contributed the maximum number of voluntary blood donors in India amongst the educational institutions. Prof. N V Muralidhar Rao Dean, Student Welfare Division (SWD) and Prof. Vimal Bhanot Coordinator NSS represented BITS Pilani and received the honors from Dr. Salim J. Habayeb, World Health Organization’s India Representative.About BITS Pilani: The Birla Institute of Technology and Science - BITS Pilani is a Deemed to be University established vide Sec.3 of the UGC Act, 1956 under notification No. F.12-23/63.U-2 of June 18, 1964. NAAC - National Assessment and Accreditation Council reaccredited BITS with 3.71 CGPA out of 4 and awarded “A” grade “Very Good” status. It is indeed a matter of pride that for the year 2009, BITS Pilani has been ranked among the top ranking universities along with IITs in various Magazine surveys such as India Today, Outlook, LiveMint etc. BITS offers degrees in various disciplines presently at Pilani, Dubai, Goa and Hyderabad campuses. The alumni of BITS Pilani are spread over various continents from Australia to America. BITS Pilani has done pioneering work in industry university collaborations in terms of Practice School and Work Integrated Learning Programmes. http://www.bits-pilani.ac.in/dlp-homeDr BR Natarajan Professor & Vice President BITS Alumni Association BITS Pilani Rajasthan 333031 India Phone 91-1596-242210 Fax 91-1596-244183 Email brnt(at)bits-pilani.ac.in Website: http://www.bits-pilani.ac.in

04-14-2020 | Arts & Culture
Al-Khalifa Business School
Prof. Igor Eleferenko appointed Dean of Al-Khalifa Business School
H.E. Prof. Sir Igor Eleferenko Ph.D. (Russian Federation) has been elected on 6th April 2020 as the Dean of Al-Khalifa Business School. Born on 23rd May 1958, in Moscow; in 1980 he graduated from Moscow State Pedagogical Institute named after M. Teresa. He has more than 40 years of experience as Associate Editor, Editor, Deputy Head of the APN Bureau in Havana, Deputy Editor-in-Chief, Editor-in-Chief of AVID APN, Editor-in-chief of TRK "TV-News"
05-28-2019 | IT, New Media & Software
Prof Research Reports
Detailed research on Global and Chinese Temperature Meters Market just published …
Worldwide Temperature Meters Market report of 2019 provides a detailed market overview as well as industry analysis for/of companies, manufacturers and distributors covering data on gross margin, cost structure, consumption value, sale price and more. Temperature Meters Market Insights 2019, Global and Chinese Scenario is a professional and in-depth study on the current state of the global Temperature Meters industry with a focus on the Chinese market. The report provides key
04-20-2019 | Science & Education
Banasthali
Banasthali Celebrates 87th Birthday of Dada Prof Diwakar Shastri
By nurturing Banasthali which is today one among the most sought after and top ranking women’s universities in India with global ranking, Prof Diwakar Shastri known to one and all as “Dada” built capacities for the spirit of inquiry, creativity and moral leadership among the enrolled girl students and became their role models. Known for his dignified unassuming personality, gleaming intellect, meticulous planning, deep regard for punctuality, far reaching vision and
11-13-2018 | Health & Medicine
ISA Pharmaceuticals
ISA Pharmaceuticals´ Chief Scientific Officer Prof. Cornelis Melief Receives ES …
Leiden, The Netherlands, November 13, 2018 – ISA Pharmaceuticals B.V., a clinical-stage immuno-oncology company, today announced that its Chief Scientific Officer Prof. Cornelis Melief has been selected by the European Society for Medical Oncology (ESMO) to receive the 2018 ESMO Immuno-Oncology Award in recognition of his life’s work in studying the interactions of the immune system with cancer. He will receive the award during an official ceremony at the opening
09-27-2017 | Energy & Environment
Banasthali
MNIT Jaipur Prof SP Chaurasia Talk on Separation Technologies for Water Purifica …
Globally, there are over 663 million people living without a safe water supply close to home, spending countless hours queuing or trekking to distant sources, and coping with the health impacts of using contaminated water. 1.8 billion People use a source of drinking water contaminated with faeces, putting them at risk of contracting cholera, dysentery, typhoid and polio. The Sustainable Development Goals, launched in 2015, include a target to ensure
09-18-2017 | Science & Education
Banasthali
Prof Joy Mukhopadhyay Talks on Colour Science & Technology at Banasthali
One field which combines Chemistry, Physics, Physiology and Psychology is undoubtedly Colour Science and Technology. Global market size of dyes and pigments is of the order of USD 27.8 Billion with India market size of USD 4.9 Billion. Specialty chemicals, which comprise low volume, high value chemicals with specific applications, constitute a significant part of the Indian chemical industry include agrochemicals, flavors and fragrances, surfactants, polymer additives, personal care ingredients,
Comments about openPR
OpenPR ist the nicest and most clearly laid out PR platform I have seen to this day. The press releases are displayed very nicely and clearly and without any unnecessary frills. The updates are fast and the finished release looks appealing and is clearly legible. Even with 16 years of experience one discovers new things from time to time. Congratulations!
Gabriele Ketterl, Director Marketing & PR, Menads