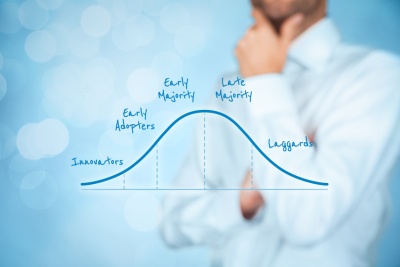 The term ‘late majority’ refers to the audience for any innovative new product or service. But of course it refers to a very specific segment of that audience. Specific, but also ‘significant’, in case the word ‘majority’ didn’t give it away. It’s crucial that you understand this audience in order to make the most sales possible, so read on and find out what it’s all about.

The term late majority is an important concept in business for any company selling an innovative or new concept.

You potentially have heard of the early adopter. This is someone who is on the cutting edge of technology and who will buy new and exciting, first-gen products. They are willing to be test-pilots for the future.

Then you have the early majority: those people who buy into a product in the second or third iteration.

Following this is the late majority. This is the point at which the product or idea has become mainstream and this is when the largest group of people will likely buy into it. It accounts for roughly 34% of the population and it precedes the final ‘laggards’.

openPR tip: If you create any new product or service, then it’s important to consider these groups and which ones you will be marketing to at any given time.

Early Adopters and Why People Can be Late Getting on Board

Now you might be wondering what makes the early adopter crowd tick and perhaps why more people don’t find themselves in this bracket. To understand this, think of the pros and cons of being an early adopter…

Looks: One of the big pros when it comes to buying technology before it's mainstream is the way it

The phones I've owned have included the laptop-like an IPAQ with phone functionality and a keyboard (in a time before keyboards), an XDA Exec, an N-Gage, a Dell Streak and a Galaxy Note. All of these have had one awesome thing in common which is that they've gotten be strange looks and made people ask questions. These aren't just communication devices, they're conversation pieces that have gotten me stopped in the street and you can tell that the other tech geeks are envious – which gives you a very nerdy joy. Sure, you can wait and still get an enviable phone, but you'll miss that point at which people literally don't even know what it is you're holding.

Smugness: Even when your devices are long gone and probably now collectible, it can bring you a certain smugness just knowing that you were there first. I'm proud of myself for owning smartphones before smartphones existed, and for installing 'apps' before the term was properly coined. I had Tomb Raider on my phone in 2002, and that's pretty cool.

Price: Actually, paying for the latest phones doesn't cost you quite as much as you might think – because you'll be selling on a very modern phone and you can then use that profit towards your next one. Apple fans who trade in their old iPhone each year for the next model will rarely need to put more than $150 towards the next one and can still stay right on the cutting edge.

Practicality: And of course these extra features that other people don't have yet are useful. Even if they haven't found mainstream acceptance yet, you often will find that once you have these features you don't know how you lived without them – and this will put you at an advantage compared to everyone else.

Miss-Steps: Even Arthur C Clarke couldn't predict the future precisely, and for every device you buy that becomes the next big thing, you're also likely to own a few that never quite catch on. I had a Dell Streak which sold about 82 copies globally. Ultimately the idea of the Phablet caught on with the Galaxy Note so I wasn't 'wrong' per say, and I did enjoy the phone, but at the same time the lack of sales meant that

Obsession: It's one thing to want the latest and most obscure gadgets you can find, but if you are obsessed about having the very latest at all times then you'll find this is an impossible task to accomplish as newer versions of your possessions are constantly being launched.

Cost: Okay I said buying the latest gadget wasn't as expensive as people think if you do it right, but it can still be a little on the costly side compared to sticking with your trusty 3310. If you're in debt then it may be time to cool off on your shopping spree.