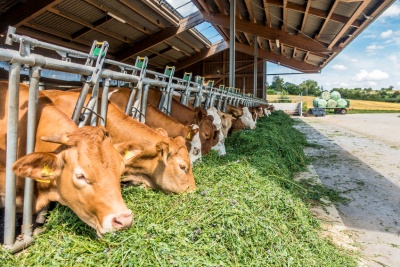 The Global Animal Feed Additives Market is projected to be value at more than $22 billion US dollars by the year 2022; a significant compound annual growth rate of 3.5 percent between the years 2014 and 2022. An increase desire among consumers to eat a protein-rich diet, among other factors, are expected to fuel the augmentation of this market during the forecasted time period.

In recent years, there has been a growing trend in farming livestock, including poultry, cattle and swing. In 2014, the production of livestock was more than 300 million tons, which was up an estimated 1.6 percent from production in 2013. These livestock products serve as a large portion of the global population. Feed additives are used to ensure these livestock products are meeting the nutritional standards that are necessary for their weight gain and metabolic functioning.

The additives that are used in animal feed are comprised of amino acids, vitamins, minerals and fatty acids. The use of animal feed additives is managed by a variety of regulatory factors across different countries. The products that are used for an animal-based protein diet must go through a very strict approval process through regulatory bodies, such as the EU, the FDA and the EFSA.

A variety of factors are expected to fuel augmentation of the animal feed additives market worldwide. One of the most prominent factors that will contribute to the rise in the size of this market is the increase of per capita spending capacity, as well as the expansion of the population size in several developing countries that consume animal-based protein, including China, India and Brazil.

An increased incidence of foodborne illnesses as a result of diseases that infect livestock, such as the swine flu and the bird flu, are also expected to drive the growth of this market globally. Feed additives can strengthen the immune system and overall health of livestock, thereby preventing the spread of these infectious diseases through animals, and therefore can reduce the spread of these diseases to humans who consume these livestock products.

A ban on the use of antibiotics in the United States and Europe is also expected to boost the size of the global animal feed additives market. The bans in these regions has given rise to replacement products that can animal feed additives can provide, such as amino acids, acidifiers and enzymes.

Furthermore, the advancement of new technologies, as well as constant improvements in the formulations of the final feed additive products are also expected to steer the growth of this industry in a positive direction.

Amino acids, such as methionine, lysine, thiamine and tryptophan have dominated the animal feed additives market in regard to product category. In 2015, these products accounted for more than 30 percent of the total revenue gained in this market. The increased consumption of meat, specifically in the Middle East and Asia Pacific is expected to be the key factor that will drive augmentation of amino acids over the projected time frame.

Antibiotics account for the second largest driving factor in regard to the product segment of the global animal feed additives market. This product accounted for 26 percent of the overall volume of this market in the year 2015. Antibotics help to promote the growth of livestock and prevent the spread of disease.

The demand for animal feed additives worldwide has been growing as a result of the rising awareness of consumers. Poultry is impacting the growth of the feed additives market globally, as it is the most widely consumed animal protein across the world. In 2015, poultry accounted for more than 34 percent of the total revenue of the animal livestock feed market globally. The outbreak of certain diseases, such as the bird flu and avian influenza has heightened awareness amongst the general public regarding the health of the poultry that they consume. As such, this has increased the demand for higher quality poultry.

It is expected that beef will closely follow poultry in terms of livestock usage for animal feed additives. An increase in the use of additives in cattle feed is projected to account for more than 29 percent of the total market share. Feed additives help to regulate the metabolic function of cattle, provide vital nutrients that enhance their growth, and positively shift their pH.

North America accounted for an estimated 27 percent of the total market share of the global feed additives market in 2015. Increased consumption of meat, primarily in the United States and Mexico, coupled with the highly stringent regulations regarding the quality of meat, are expected to be key drivers of the market in this region.

Globally, the animal feed additives market is extremely competitive, yet fairly concentrated, as a small percentage of companies account for the maximum share of the production of feed additives. Key players in this market include Novozymes, DSM, BASF, Evonik, Danisco and Cargill.