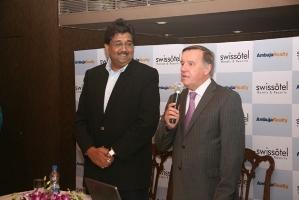 ZURICH, 15th September 2009 – For the first time, the international hotel chain Swissôtel Hotels & Resorts is to open a Swissôtel in India. A management contract has just been signed between Bengal Ambuja Housing Development Limited Pvt. Ltd., one of the most reputed promoters in India, for a Swissôtel in Kolkata, which is due to open in the fourth quarter of 2009. The new deluxe hotel will be part of City Centre – New Town shopping mall with shops, restaurants and a multiplex cinema, and has 147 rooms, each at least 32m² in size. Three restaurants, including a speciality restaurant and an open-air restaurant, a lobby bar and a poolside bar are available to guests. Facilities also include conference rooms offering 1261m² of space, a fitness centre and a rooftop swimming pool.The management contract was signed with Bengal Ambuja Housing Development Limited Pvt. Ltd. (BAHDL), a company belonging to the prominent Neotia family, which has built up India’s largest cement business, before divesting the same few years ago. Since then the Neotia family has been focusing entirely on real estate business, the construction and operation of shopping malls, housing, commercial space and the hotel industry. “India is the world’s second-largest nation; the numbers are on a gigantic scale,” says Meinhard Huck, President Swissôtel Hotels & Resorts. “India is set to become the world’s third-largest economy by 2020. Consumer demand is growing steadily, particularly in the cities, and the middle class, which is also growing rapidly, has ever increasing consumption needs. Against this background, we see great potential for our hotel chain and are delighted to have found in BAHDL a well-known partner that appreciates our Swiss values».The new Swissôtel is being built in the new and developing city district of Rajarhat, which in the last few years has become home to numerous large IT and commercial companies (including IBM, Philips, Wipro and Tata), as well as residences, schools, shopping malls, sports centres and cultural centres. The hotel is located 3km from Kolkata’s Netaji Subash Chandra (N.S.C.) Bose International airport.Kolkata, capital of the Indian state of West Bengal, is a city of 6 million inhabitants, with a further 14 million people living in the metropolitan area, making it one of India’s five largest metropolises alongside New Delhi, Mumbai, Chennai and Bangalore. It is also the main financial centre in eastern India. The largest growth sectors are those areas that are prospering as a result of outsourcing, particularly by US companies, namely hardware and software manufacturing, call centres, publishing and healthcare. The country’s second-largest stock exchange, the Calcutta Stock Exchange (CSE), is also based in Kolkata.Swissôtel Hotels & Resorts is a distinctive group of deluxe hotels for today’s discerning business and leisure travellers, combining the renowned Swiss touch with a fresh, contemporary and modern design. Each Swissôtel hotel offers personalized service with charm and efficiency. Located in main gateway destinations and city centres, the hotels have convenient access to business and shopping districts, and local attractions. Swissôtel Hotels & Resorts worldwide have won prestigious awards and accolades. Swissôtel Hotels & Resorts is owned by Fairmont Raffles Hotels International, a leading global hotel company with 91 hotels and resorts worldwide under the Raffles, Fairmont and Swissôtel brands. The company also manages Fairmont and Raffles branded Residences, Estates and luxury private residence club properties. Swissôtel Hotels & Resorts under development: Swissôtel Dresden, Germany (2011)Swissôtel Hotels & Resorts Balz-Zimmermann-Str.7 8302 Kloten, Zurich SwitzerlandEva-Maria Panzer Director Communication evamaria.panzer@swissotel.com