Strychnin Gallery Berlin presents: A Space in all the Noise. New Works by Jason Shawn Alexander and Gene Guynn 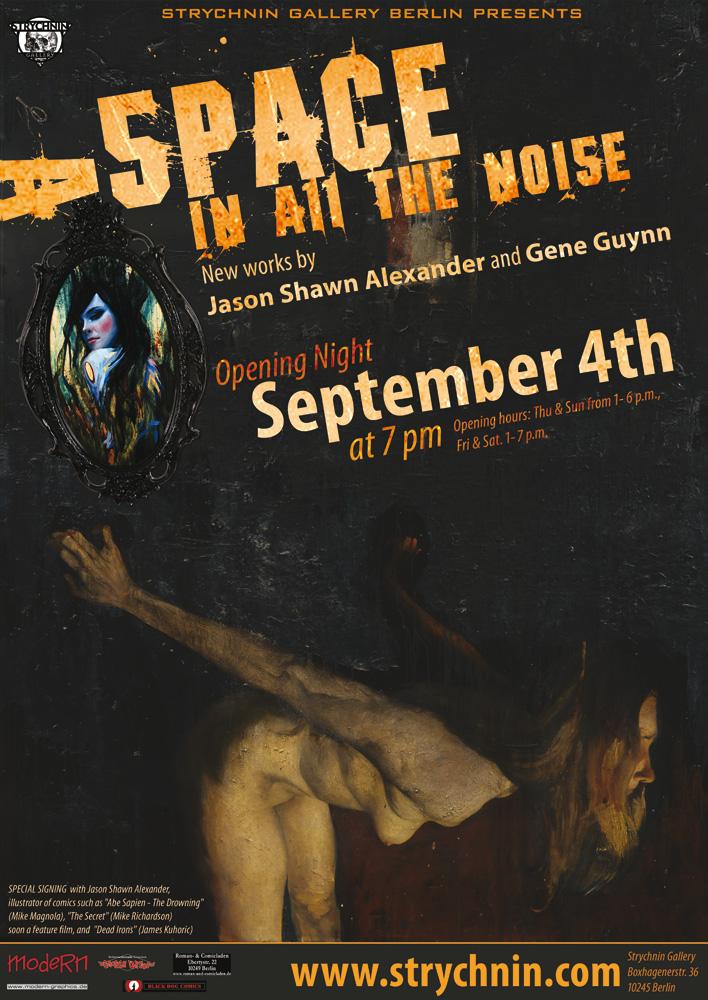 American painter Jason Shawn Alexander is a self-taught artist: never having attended formal art school, art language and "isms" mean nothing to him. The things that matter in his work are honesty and emotion, and while it is his aim to make people think, it is first and foremost to make them feel. His works have been exhibited all over the USA, most recently also in the National Portrait Gallery in Washington DC, and in Europe. Bringing to mind painters such as Lucian Freud, his portraits often picture uncomfortably physical embodiments of his subjects’ emotions. Gene Guynn, originally from Texas, defines his portraits through a symbolic scar that stands for each person's past experiences, memories and emotions. Reception for the artists on September 4th, 2009, at 7 pm. Alexander’s work tries to touch a place deep inside his viewers, often proving to be uncomfortably close and highly emotional. His works tend to be executed using a sombre, earthy color palette strong in browns and grays, with occasional shades of red and blue, contrasting and yet complimenting the inner turmoil of his subjects. Bringing to mind painters such as Anselm Kiefer as far as color goes, his human figures are reminiscent of portraits by Lucian Freud or Francis Bacon: they are very physical in their presence – their skin sometimes has an unhealthy color, veins show through an almost transparent skin that often doesn’t quite seem to fit, metaphorically blurring the lines between form and content. Innermost feelings are embodied in physical discomfort, limbs appear elongated and sometimes distorted, personalities are split in two with eerie doubles and masks – Alexander’s bodies are fascinating even though they are sometimes uncomfortable to look at. Born and raised in a small town in Tennessee where people tended to be honest, real, and genuine, Jason Shawn Alexander has since moved to Los Angeles, yet his rural upbringing shapes his work until today. Not unlike good blues (which he is a fan of), it often explores the darker side of life. The ultimate expression, however, is one of survival, if not hope. He has also produced illustrations for Warner Brothers, Hasboro, White Wolf Inc, and Dalmatian Press. He has received the Silver Medal Award from The Society of illustrators-Los Angeles as well as two Eisner Award Nominations for his illustrative work, which includes “Abe Sapien – The Drowning” for Mike Magnola (“Hellboy”). Gene Guynn was born and raised in Fort Worth, Texas, and from a very young age was immersed in the world of art. With a painter for a mother and a musician for a father, his world was always one of creativity and expression. Gene takes inspiration from the thriving urban, outsider, and lowbrow art culture of San Francisco, Los Angeles, and New York City, and combines it with a fine art sophistication. His painting process usually begins by combining loose charcoal pencil work with expressive paint work, using lots of washes and tons of solvent that he then gradually thickens, bringing more and more control and care to the brush strokes as the painting progresses. He creates his work by gradually pulling his figures into order out of the depths of chaos that each of his paintings starts out with, strategically juxtaposing order and chaos. He likes his work to have a sensuous and luxurious feeling when it comes to the application of the paint, while it has many elements of anonymity conceptually speaking: many of the women he paints look very similar, and often have no eyes or covered eyes, which strips them of their individuality, leaving their soul only to be defined by the scar in the painting. This scar is the defining element of his latest series of works, symbolizing each person's past experiences, memories, emotions, and in essence their soul. A Space in all the Noise. Jason Shawn Alexander and Gene Guynn. Opens September 4th at 7 pm Runs until: October 4th 2009 Opening hours: Thu & Sun from 1- 6 p.m., Fri & Sat. 1- 7 p.m. With galleries in three bustling hotspots – New York City, Berlin, and London – Strychnin Gallery is a playground for artists from all around the globe. It is a place where collaboration is encouraged, new projects are constantly developed and creativity is the one and only thing that truly counts. Owned by charismatic curator Yasha Young, Strychnin is dedicated to presenting emerging American artists to the European art world and vice versa. It features a variety of artists with particular individual styles rather than artists belonging to a collective “hip” movement. If you insist on putting a label on them, try lowbrow turned highbrow, pop surrealism or fantastic realism among others. Founded in Brooklyn in 1998, the gallery opened a European showroom in Berlin in 2002. The US gallery has since moved to a location in Manhattan’s Chelsea district, opening with a group show featuring over 70 artists in October of 2006. Strychnin Gallery opened a third location in East London’s vibrant art scene right off of Brick Lane in October 2007. The gallery participates in major international art fairs on a regular basis, including Bridge Art Fair, Liste, or Art Fair 21 in Cologne, which appointed gallery owner Yasha Young to its selection committee in 2008. Strychnin Gallery Boxhagenerstr. 36 10245 Berlin www.strychnin.com PR contact: Iris Bitter pr@strychnin.com phone 030 9700 2035

You can edit or delete your press release Strychnin Gallery Berlin presents: A Space in all the Noise. New Works by Jason Shawn Alexander and Gene Guynn here

01-14-2019 | Arts & Culture
Svensonguitar
Svenson and Alexander Veljanov released single together
"Hiding from me" is the name of the new release of the exceptional guitarist Sven Kühbauch. For the song, he could win Deine-Lakaien-singer Alexander Veljanov. "His voice is epic and goes well with the guitar sound I was looking for," says Kühbauch. The song tells the story of Helios, the Greek sun god. The personification of the sun is said to have chased a four-in-hand carriage across the sky every day.
11-28-2018 | Advertising, Media Consulting, …
HTF Market Intelligence Consulting Pvt. Ltd.
Scarf Market 2018 Overview | Gucci, Alexander Mcqueen, Valentino, Tory Burch
HTF MI released a new market study on Global Scarf Market with 100+ market data Tables, Pie Chat, Graphs & Figures spread through Pages and easy to understand detailed analysis. At present, the market is developing its presence. The Research report presents a complete assessment of the Market and contains a future trend, current growth factors, attentive opinions, facts, and industry validated market data. The research study provides estimates for
08-06-2018 | Arts & Culture
Johansson Projects
Loop Melody | Rachel Kaye and Alexander Kori Girard
With foreground and background largely erased, each artist leaves it to the viewer to choose the topsy-turvy direction. Here's one storyline. Here's another. Here's an endless number of storylines vibrating on the surface. Kaye's granular drawings are seasonal, even hourly, depictions of light and intimacy. They blanch in the yellow California summer. They fold in, purple and blue, at twilight. The borders disappear as her shapes meander across one another,
09-20-2017 | Advertising, Media Consulting, …
Yacht Market
Global Yacht Market 2017 Ocean Alexander, YMMAHA, Brunswick
Global Yacht Market Outlook 2017 Industry Growth, Share, Analysis, Application and Forecast to 2022 Yacht Market Report by Material, Application, and Geography – Global Forecast to 2022 is a professional and comprehensive research report on the world's major regional market conditions, focusing on the main regions (North America, Europe and Asia-Pacific) and the main countries (United States, Germany, United Kingdom,Japan, South Korea and China). In this report, the global Yacht market is
09-23-2016 | Arts & Culture
Johansson Projects
CODY HOYT + ALEXANDER KORI GIRARD | OCTOBER 22
In Cody Hoyt and Alexander Kori Girard’s upcoming show at Johansson Projects, patterned forms and organic geometries come together in an unique exploration of functional permanence and mystic communication. Cody Hoyt’s ceramics are rigorously drawn, curiously angular, and intricately patterned, creating brutalist organic “vessels” that question the need for function over form. The forms are constructed from patterned slabs, which are themselves assembled from smaller individual pieces; a highly individualized framework
12-14-2012 | IT, New Media & Software
amiando GmbH
amiando: Alexander Sperber is new Head of Marketing
Munich – December 3, 2012 – amiando (www.amiando.com), Europe’s leading tool for online event registration and ticketing, is pleased to announce that Alexander Sperber will be the new Head of Marketing. Alexander Sperber will now be in charge of the marketing department at amiando. Sperber began his career as a marketing manager at AMG Mercedes in Affalterbach, Germany. As founder of several successful e-commerce companies he gained extensive knowledge in the
Comments about openPR
We publish our press releases on openPR.de because we like people who are "open" - just like us.
Frank Obels, CEO, INCONET - Informationssysteme, Communication und Netzwerkberatung GmbH