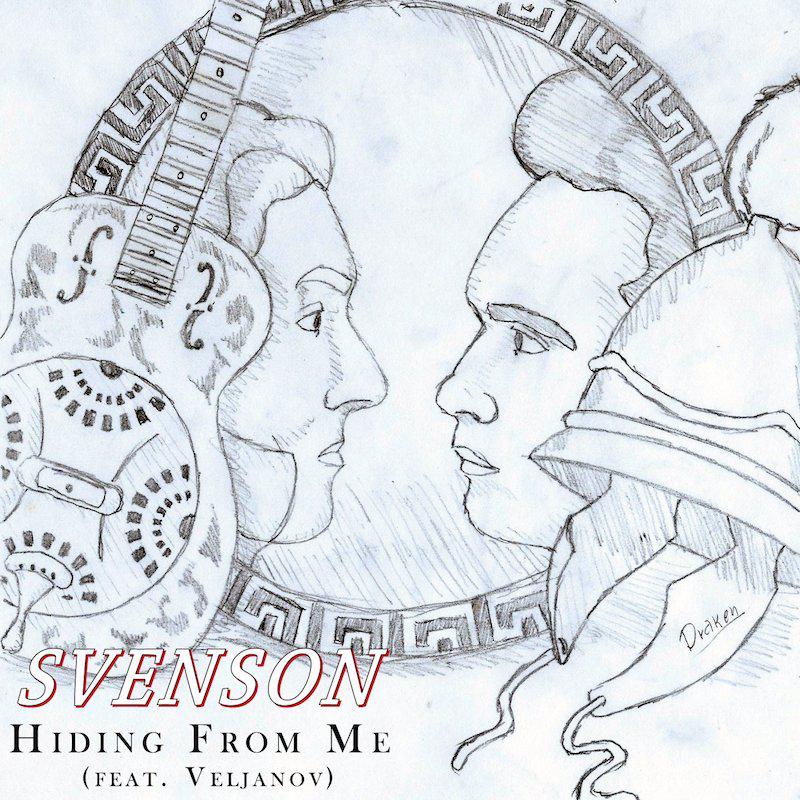 "Hiding from me" is the name of the new release of the exceptional guitarist Sven Kühbauch. For the song, he could win Deine-Lakaien-singer Alexander Veljanov. "His voice is epic and goes well with the guitar sound I was looking for," says Kühbauch.The song tells the story of Helios, the Greek sun god. The personification of the sun is said to have chased a four-in-hand carriage across the sky every day. "This metaphor seemed very appropriate to us because Alexander Veljanov has Macedonian roots and his voice is just unique. So, as soon as I composed the piece in D minor and played my old Dobro Duolion Model 33, I heard his voice singing the chorus. That's why Alexander had to sing the recording, "says the studied guitarist Sven Kühbauch.Well, he is very happy to have the young drummer Richard Muenchhoff back in the band: "Richard has already participated in my last recording with Jennifer Batten. He has that special something I'm looking for in a drummer. "However, it took three years to find the perfect guitar tone. Although, Kühbauch had an original Dobro Duolian, Model 33, a resonator guitar made in 1972 made in the USA, a rare specimen that was built according to the manufacturer for just one year. He worked together with Pyramid strings Germany and had to make special guitar strings for the Dobro-Sound: Notwithstanding, Svenson's Resophonic String Set has the strengths 016-059 and the bass strings are polished. Kühbauch only plays with fingers, without a plectrum, and use a Dunlop "Moonshine" ceramic bottleneck.The result is a piece that flowed from the artist's heart. The recurring, simple chord progression is very memorable. The song gets the certain whistle through a very special instrument: "I really wanted to use a Mellotron for the piece. In addition to the resophonic unplugged sounds of the title, this creates a characteristic, warm, slightly melancholic sound, as can be heard in the piece "Strawberryfields Forever" by the Beatles. "So, the text of the song "Hiding from me" was written by Alexander Veljanov. "His words pick up the melancholy of the melody and set her up with the Helios metaphor the crown of the sun god," says Kühbauch happily. The title has been available for download on all known online platforms since 14.01.2019.Hiding from me:iTunes: https://itunes.apple.com/de/album/hiding-from-me-feat-alexander-veljanov-single/1444597721 Amazon: https://www.amazon.com/Hiding-Me-feat-Alexander-Veljanov/dp/B07L6BGC9Y Spotify: https://open.spotify.com/album/7wu2drqX4E8Lz5lkn3yXlt Youtube: https://youtu.be/zwOoRW0rqssVocals: Alexander Veljanov Guitar, Mellotron, Bass - Svenson Drums - Richard Muenchhoff Mix / Master - Manfred Zmarsly Video, cover - DrakenFor over ten years, the 42-year-old rocked under his stage name Svenson. In 2017, the studied and passionate guitarist showed his impressive range on his anniversary album "10th anniversary" and triumphed with out-of-print titles such as "Ride away", in which the otherwise convinced instrumental artist even sings. Winner of the award is "T for Theia" ("Best Instrumental Blues Song" / The Academy Music Award). Further, the international press paid tribute to the album and guitarist by writing: "Svenson plays rhythm and lead guitar at once much like Charlie Hunter does (...) a solitary acoustic guitar well done with beautiful chords and clean articulation." (Blues Report), "Svenson uses his expertise as a guitarist to speak to his audience. (Warlock Asylum International News) "Svenson's breadth of talent and style is evident as his brand of restrained wizardry and his ability to put the matter to the fore." groove above all else with creativity and impeccable precision purveys the album. "(Tunedloud)So much skill does not come by chance: The musician Svenson from Marburg an der Lahn studied at the jazz and rock school in Freiburg, which he left as the best guitarist of the year. Also, since 1994, he has given individual and group lessons and has gained his rich experience in masterclasses, lessons and workshops by Greg Howe, Scott Henderson, Pat Metheny, Joe Dioro, Michael Sagmeister, David Friesen, Uwe Kropinski, John Stowell, Matt Smith, Georg Gruntz and Ernie Watts. He has performed worldwide with his solo show and as a band guitarist, including at the Montreux Jazz Festival, and has worked with such greats as Jerry Donahue, Jennifer Batten (Michael Jackson), Lulo Reinhardt, and star percussionist Rhani Krija (Sting). With the latter, who is considered a "world-class percussionist" (drums & percussion), he recorded the original composition "Agua de mundo" (2016, format: Download), the Big Foot Records as an opener for the environmental compilation "Our Green Earth "Selected. His solo albums are highly prized in professional circles, not just the web radio station "Blues Road “Was enthusiastic:" More than worth listening to. A guitarist who puts his feelings into music and miraculously serves his guitar. "But not only on the guitar has Kühbauch showed empathy and passion. But also through his enthusiasm for the Wild West and as an avowed Karl-May fan, Kühbauch was delighted to compose and record the chapter music for six Karl May audiobooks (Karl May Verlag, Bamberg). Also, at the request of the publisher, Kühbauch presented his Karl May sound world to the illustrious audience of the 100th anniversary of the publishing house, where Winnetou's sister Nscho Tschi (Marie Versini) was also a guest. Kühbauch's compositions are as catchy as credible and can be heard in various television productions (including Sat1).In workshops (published in the magazine "Guitar & Bass", "Soundcheck" among others) and interactive eBooks, Sven Kühbauch teaches his knowledge. His "Interactive Guitar workshop" series is considered ground-breaking and has established itself as the standard work of modern interactive guitar textbooks. Also, Svenson's interactive guitar workshops are available in three languages.Gaia BornPublic RelationsSvensonGuitar Bahnhofstraße 818581 Putbuspresse@svensonguitar.com

07-30-2020 | Business, Economy, Finances, B …
mybreev GmbH
Sven Leidel Joins mybreev to Launch the mybreev International Partner & Broker P …
mybreev, one of the leading European providers of online training and distance learning solutions with the focus on security, safety, cyber and compliance, today announces a new key staff for further international expansion and growth. With immediate effect, Sven Leidel is responsible for the internationalization of the mybreev Group as the Managing Partner of the Global Sales Partner & Broker Program. With this expert, further access to new international markets
10-12-2017 | Fashion, Lifestyle, Trends
Sven Can See
PORTABLE OUTDOOR-CENTRIC PRODUCT RECEIVES MAJOR INDUSTRY RECOGNITION
Anti-Fog Solution, Sven Can See, Named Must-Have Gear for 2018 Holbrook, MA – Every year, outdoor enthusiasts across the country await for one particular roundup of coveted gear on the rise. That annual list is published by industry-leading Backpacker magazine, and this year, the first four season anti-fog solution of its kind, Sven Can See®, has made the cut. Renowned for its innovative spray gel that keeps eyewear fog-free all day,
08-18-2017 | Business, Economy, Finances, B …
Innoplexus
Innoplexus welcomes Dr. Sven Niedner as the Chief Operating Officer and Juergen …
Innoplexus announces the joining of two members in the leadership team, Dr. Sven Niedner as the Chief Operating Officer and Juergen Raths, MD as Life Sciences Head both effective from August 1st 2017. Dr. Gunjan Bhardwaj, Founder & CEO and Gaurav Tripathi, CTO of Innoplexus discussing about the expertise that Dr. Sven Niedner and Juergen Raths, MD would bring to Innoplexus said: "Both add experience and understanding of how companies scale
09-08-2016 | Industry, Real Estate & Constr …
Bühler Motor
Bühler Motor: Dr.-Ing. Sven Urlaub New Director of Thermomanagement Automotive …
Nuremberg, September 1, 2016 – Dr. Sven Urlaub has been named global Director of the Automotive Thermomanagement product segment of Bühler Motor GmbH effective July 1, 2016. In this position, he succeeds Mounir Kudsi, who has taken over as Vice President for the Central Research & Development division since February 1, 2016. Bühler Motor is one of the leading suppliers of innovative mechatronic drive solutions, with over 1,750 employees in 10
01-17-2012 | Arts & Culture
Light Space & Time Online Gallery
Sven Frøkjær-Jensen Now a Light Space & Time Featured Artist
Jupiter, Florida - January 16, 2012 -- Light Space & Time Online Art Gallery announced today that the Danish artist, Sven Frøkjær-Jensen was chosen for the Gallery's most recent Artist Showcase. Sven Frøkjær-Jensen has had a very thorough university education as a professional historian, which has been a great advantage for him in his love of art. He started out with a vivid and strong fascination of the Cobra art movement,
12-21-2009 | IT, New Media & Software
XING AG
Marc-Sven Kopka to be new Vice President Corporate Communications at XING
Hamburg, December 18, 2009 - Starting January 15, 2010, Marc-Sven Kopka (41) will be joining the management of the publicly listed XING AG (ISIN: DE000XNG888) as the new Vice President Corporate Communications. Mr. Kopka will report in this role directly to the CEO of XING AG, Dr. Stefan Gross-Selbeck. Before taking up his new post at XING AG, Mr. Kopka was most recently Head of Corporate Communications at WestLB AG
Comments about openPR
OpenPR is clearly structured and remains true to its principle of confining itself to the essential parts. OpenPR has proven to be a very good and reliable partner to our media agency: Within the shortest time the releases are online and go down well with the media representatives. The success of OpenPR is reflected in the steadily increasing number of press releases. It is good that OpenPR exists!
Ursula Koslik, Director Marketing & PR, F+W Hamburg