True Fleet Market France rises by more than 20 per cent 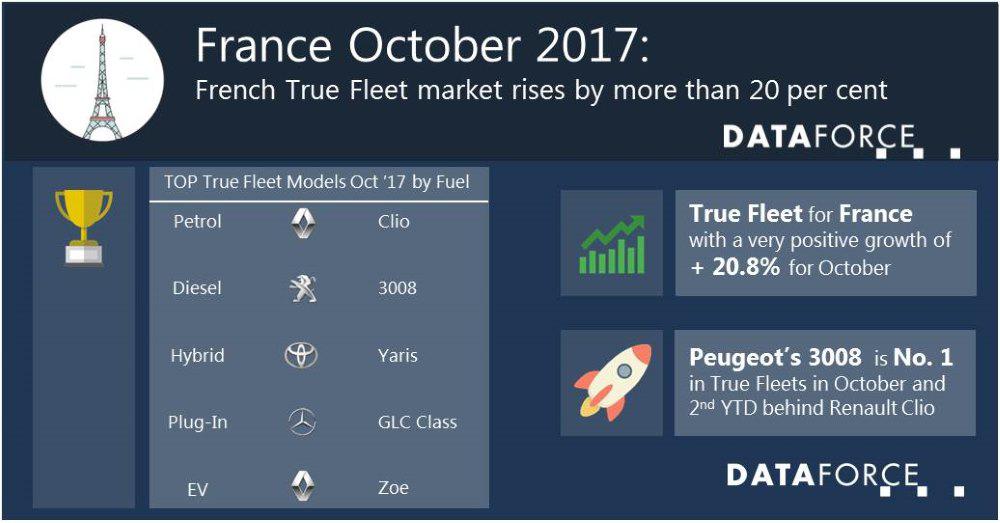 In October the French True Fleet Market really outshone the rest of the EU-5 in terms of growth. With more than 43,000 new car registrations the fleet market reached its biggest volume for October since the beginning of our analysis back in 2003. It was the sixth month in a row with a positive growth when compared to last year’s respective months and the fabulous rate of + 20.8% has been the highest since December 2015. The performance of both the Private Market and Special Channels was not on the same level but still very positive with + 11.0% and + 12.9 % respectively. This pushed the Total Market volume in France to more than 176,000 registrations outperforming Italy by almost 7,700 cars and becoming the second biggest market in Europe behind Germany for this month.Brand performance With a share of 26.2% Peugeot was fleet’s undisputed market leader in France. This share was not only the highest for the brand from Sochaux since September 2005 but also represents its highest volume ever in terms of absolute figures. The SUV models are performing extraordinarily well, the 3008 is currently the most preferred model for company car drivers overall and the larger 5008 is already in 7th position. The Top nine fleet models are as follows for October: Peugeot 3008, Renault Clio, Peugeot 208, Peugeot 308, Renault Megane, Citroën C3, Peugeot 5008, Renault Scenic and Citroën C4 Picasso underlining the dominance of French brands in their home market.Renault is in 2nd place in the brand ranking and Citroën (3rd) had a successful month as well with growth rates of 16.6% and 24.2% respectively. Volkswagen, Audi, BMW, Mercedes and Ford (despite a remarkable increase of 64.6%) all kept their positions while Toyota (9th, + 27.2%) and Nissan (10th, + 13.6%) swapped rank. Although missing out on entering the Top 10 Opel, Fiat and Volvo showed encouraging figures as well with growth raises of + 15.2%, + 26.8% and + 30.3% respectively. In October, these manufacturers’ number 1 models by absolute volume growth were Opel Mokka X, Fiat 500 and Volvo XC60.Diesel crisis! Diesel crisis? Of course the diesel crisis is currently a hot topic around the automotive industry in Europe but France seems to be less affected. For October’s YTD, the share of diesel engines in True Fleets dropped by 3.9 percentage points. However this decrease is one of the smallest in Europe and from the EU-7 countries is only bettered by Italy’s drop of just 2.7 percentage points. Within the Top 10 brands, models equipped with a diesel engine were representing 79.6% of all new passenger car registrations. By removing Toyota from this calculation (73% of their cars have a hybrid powertrain) the ratio even goes up to 81.4%.(460 words; 2,716 characters)DATAFORCE – Focus on Fleets Dataforce is the leading provider of fleet market data and automotive intelligence solutions in Europe. In addition, the company also provides detailed information on sales opportunities for the automotive industry, together with a wide portfolio of information based on primary market research and consulting services. The company is based in Frankfurt, Germany.Gabriel Juhas Dataforce Verlagsgesellschaft für Business Informationen mbH Hamburger Allee 14 60486 Frankfurt am Main GermanyPhone: +49 69 95930-250 Fax: +49 69 95930-333 Email: gabriel.juhas@dataforce.de www.dataforce.de

08-15-2017 | Business, Economy, Finances, B …
Tri-County Regional Black Chamber of Commerce
October 2017 - Trade Mission To Belize
FOR IMMEDIATE RELEASE Media Contact: Leondria R. Thompson Email: Press@tcbcc.org 1+-832-875-3977 October 2017 - Fourth Quarter Business Development and Investment Opportunity Trade Missions to Belize, Central America August 14, 2017, Houston, Texas USA – Tri-County Regional Black Chamber of Commerce (TCRBCC) will host its fourth quarter International Business Development and Investment Opportunity Trade Mission in Belize for October 10-14, 2017 and October 17-21, 2017. TCRBCC’s third quarter trade mission to Belize, July 18-22, 2017, resulted
09-23-2016 | Arts & Culture
Johansson Projects
CODY HOYT + ALEXANDER KORI GIRARD | OCTOBER 22
In Cody Hoyt and Alexander Kori Girard’s upcoming show at Johansson Projects, patterned forms and organic geometries come together in an unique exploration of functional permanence and mystic communication. Cody Hoyt’s ceramics are rigorously drawn, curiously angular, and intricately patterned, creating brutalist organic “vessels” that question the need for function over form. The forms are constructed from patterned slabs, which are themselves assembled from smaller individual pieces; a highly individualized framework
11-05-2014 | Leisure, Entertainment, Miscel …
MAX Agency
MAX Agency Press Release – October 29, 2014
Featured in this week’s press release is MAX Agency Toronto Actor and Talent Frank Vaz. Toronto, ON, November 01, 2014 - Featured in this week’s press release is MAX Agency Toronto Actor and Talent Frank Vaz. I asked Frank to tell us about himself and discovered some very interesting things about this Military Man turned Model/Actor. “I was in the Canadian Military for twenty-two years. I’ve also done a lot of community
10-10-2012 | Energy & Environment
rational motion
October Trade Show Triathlon
A high-intensity program of three events for rational motion and TM4 in Germany. Cologne, October 9, 2012 October is marathon month for rational motion and partner enterprise TM4. With three events following close on one another, the two companies are on tour for electric powertrains and vehicle integration throughout the month. The grand finale will be a joint booth at the eCarTec in Munich. Though the three events differ greatly, they all
10-12-2010 | Politics, Law & Society
NASGA - National Association to STOP Guardian Abuse
Florida: October is "Guardianship Month"
Florida Governor Charlie Crist has declared October as “Guardianship Month.” NASGA would point Governor Crist’s attention to the fact that the original intent of guardianship/conservatorship law - “guard,” “protect” and “conserve” - is no longer being complied with in a frightening and growing number of cases involving court-appointed fiduciaries. Wards' estates, instead of being conserved, are being plundered in the guise of fiduciary fee billings for "services," either not
09-26-2008 | Business, Economy, Finances, B …
PerTOOLS
Free PerTOOLS Licenses Throughout October
Today in London, PerTOOLS, the provider of Time Series Analysis and Data Extractor tools announced that they will be giving away free licenses of their products. This offer coincides with the company’s second anniversary which is at the end of October. Paul Darvell, Operations Director of PerTOOLS stated "Our primary focus has always been to enable people to use our tools. That is why we have always offered
Comments about openPR
9 o'clock: discuss press release with client, 10 o'clock: submit release to openPR, within the briefest possible time release is published and displayed in a prominent place on openPR.de. I am thrilled!
Zehra Spindler, Calypso Now! - Communication Agency