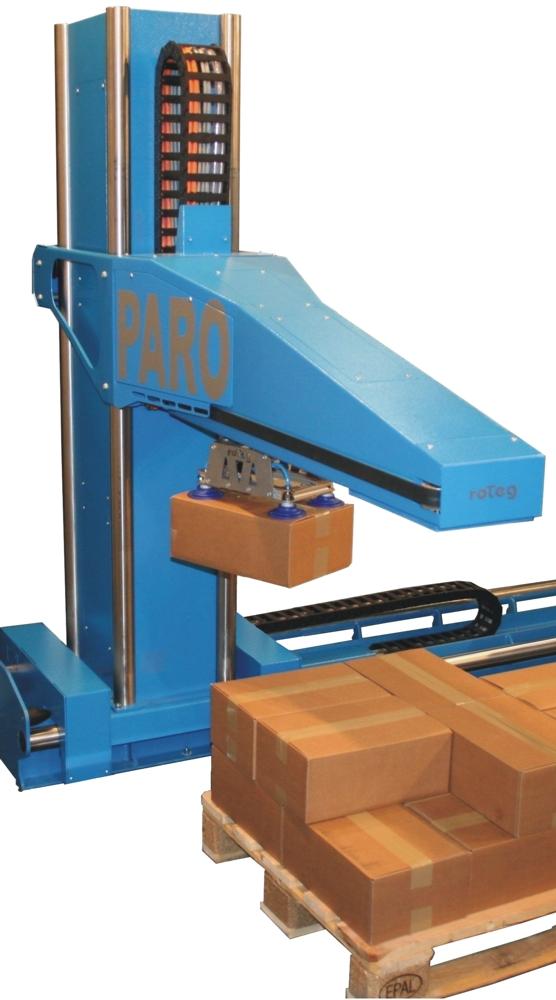 roTeg AG to display the latest developments in robot palletting technology at North Rhine-Westphalia's joint standDortmund, März 2009 – At the Hanover Industrial Trade Fair in April 2009 Dortmund-based roTeg AG will be exhibiting modern automation technology. The PARO palletising robot with its PARO Control system is suitable for all industries and can be operated without any knowledge of programming.The engineering company roTeg AG will be exhibiting innovations in the field of robot technology at the joint stand of the state of North Rhine-Westphalia in Hall 16 of this year's Hanover Trade Fair. The PARO palletising robot has already won several awards and stands out due to its flexibility and user-friendliness. With only a few finger movements on the touch-screen delivered with the robot, a new parcel and layer pattern can be created in less than a minute. Due to its flexibility the system can be used in all industries that use pallets. Besides its intelligent control system, the robust but uncomplicated construction is another feature that contributes to the robot's success. All its features have been reduced to the absolutely essential, making it attractive to small and medium-sized companies with limited budgets. The simplification of the robot controls is the focal point of roTeg's development work. With the use of self-explanatory and practice-oriented user experience, working with the robot is as easy as operating a laptop.roTeg has been active in robotics industry since 1993 and has grown to be a specialist for palletising technology due to the innovative ideas of its motivated staff. A further focus lies on special-machine construction for power-plant technology and automation solutions in explosive refinery areas. Well-known companies of all industries have been profiting from the solutions developed by the creative engineering team and manufactured by the in-house production.roTeg AG Roboter Technologie Emil-Figge-Str. 76 44227 Dortmund Germanyp.: +49 (0) 231 / 9742-380 f.: +49 (0) 231 / 9742-380e-mail: kontakt@roteg.de internet: www.roteg.de

07-30-2010 | Logistics & Transport
roTeg AG
Fachpack 2010: roTeg shows PARO palletising robot as compact cell
PARO palletising robot for different types of packages in limited spaces The Dortmund-based company roTeg will show different palletising robots of the PARO type at Fachpack in Nuremberg. The compact robot is suitable for all branches of trade and demonstrates its flexibility by means of combinatory grippers and the generation of mixed pallets. At booth 3-406 of the trade fair for packaging solutions, roTeg AG will present palletising robots with compact dimensions.
06-25-2010 | Logistics & Transport
roTeg AG
roTeg presents trendsetting gripper solutions for robot systems at Automatica’ …
New solutions for robotic gripping-systems were presented at the user forum of this year’s Automatica. Dr.-Ing. Thomas Graefenstein gave a lecture on this thematic focus and demonstrated many practical examples of how control and gripping systems work together as a team. This year’s participation in the trade fair for automation and mechatronics, already taking place for the fourth time, this year focusing on robotics turned out a great success for roTeg.
05-21-2010 | Logistics & Transport
roTeg AG
Robot Technology in the Ascendant
Multi Talent PARO® Juggles with Balls At the shared booth of the Ministry of Economic Affairs and Energy of the State of North Rhine-Westphalia, the PARO® palletising robot demonstrated its skills and flexibility when handling unusual package types: In addition to boxes, also balls were palletised in Hannover this year. The PARO® robot, originally designed for palletising processes at the end of production lines, placed balls onto an air stream at the
01-28-2009 | Logistics & Transport
roTeg AG
PARO at special-event area of Anuga FoodTec
roTeg AG takes care of palletising at the end of Robotik-Pack-Line Dortmund, Germany, January 2009 – Robotik-Pack-Line presents a complete production line for mini burgers at the special-event area of Anuga FoodTec in March 2009. After production and packaging of the food, the PARO palletising-robot system does the palletising of the trays. As a team partner of Robotik-Pack-Line, roTeg AG presents the new technology of the PARO palletising robot. A complete production