Robot Technology in the Ascendant 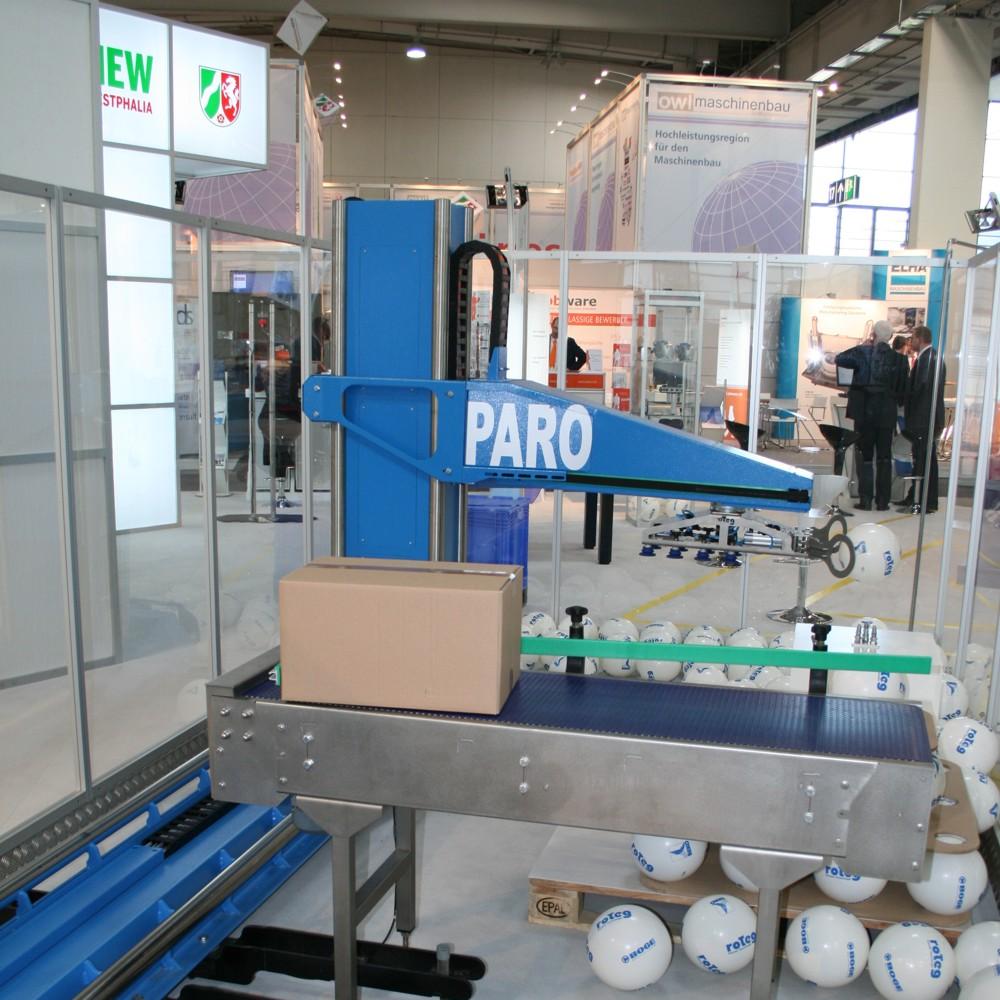 PARO palletising robots grabs balls out of the air

Multi Talent PARO® Juggles with BallsAt the shared booth of the Ministry of Economic Affairs and Energy of the State of North Rhine-Westphalia, the PARO® palletising robot demonstrated its skills and flexibility when handling unusual package types: In addition to boxes, also balls were palletised in Hannover this year.The PARO® robot, originally designed for palletising processes at the end of production lines, placed balls onto an air stream at the trade fair, which then danced in the whirling air for some minutes. Afterwards, the robot caught the floating balls out of the air again and set them off on a ball pyramid. The compressed air for the whirling air stream was generated directly at the trade fair by trade-fair booth partners Boge and Beko by means of an innovative compressor system and was fed into the robot cell in conditioned form.The multi-functionality of the gripping tools developed by roTeg was exemplary demonstrated here by means of a combined clamp-/suction-gripper, which was able to safely handle balls as well as box packages. The transparent protective device and the robot accessible and viewable from all sides offered a precise insight in the technology of the PARO® palletising robot to the interested fair visitor. Also the easily operable control and the user friendly operation concept could be well and vividly demonstrated with the trade fair robot.about roTeggeneral: roTeg has been active in robotics industry since 1993 and has grown to be a specialist for palletising technology due to its innovative ideas. A further focus lies on special-machine construction for power-plant technology and automation solutions in explosive refinery areas. Well-known companies of all industries have been profiting from the solutions developed by the creative engineering team and manufactured by the in-house production.palletising technology: The palletising robots in combination with their gripping systems and control software produced by roTeg form an extremely reliable and simply operable robot system. Depending on the requirement profile, a corresponding model of PARO will be offered for the optimised application in the company. The aim of the development is to take as much work as possible from the operator while offering flexibility. The robust construction and the constantly auto-diagnosing system guarantee for a high availability and process stability. Product changes or even the programming of new package patterns can be entered by the operating staff by means of the menu navigation. Due to the application of multifunctional grippers, the exchange of the gripping tool becomes obsolete, which adds up to the efficiency of the intelligent system. The flexible robot system with its timely control is adjustable to new tasks in the expanding market.roTeg AG Roboter Technologie Emil-Figge-Str. 76 44227 Dortmund Germanyp.: +49 (0) 231 / 9742-380 f.: +49 (0) 231 / 9742-380e-mail: kontakt@roteg.de internet: www.roteg.de

07-30-2010 | Logistics & Transport
roTeg AG
Fachpack 2010: roTeg shows PARO palletising robot as compact cell
PARO palletising robot for different types of packages in limited spaces The Dortmund-based company roTeg will show different palletising robots of the PARO type at Fachpack in Nuremberg. The compact robot is suitable for all branches of trade and demonstrates its flexibility by means of combinatory grippers and the generation of mixed pallets. At booth 3-406 of the trade fair for packaging solutions, roTeg AG will present palletising robots with compact dimensions.
06-25-2010 | Logistics & Transport
roTeg AG
roTeg presents trendsetting gripper solutions for robot systems at Automatica’ …
New solutions for robotic gripping-systems were presented at the user forum of this year’s Automatica. Dr.-Ing. Thomas Graefenstein gave a lecture on this thematic focus and demonstrated many practical examples of how control and gripping systems work together as a team. This year’s participation in the trade fair for automation and mechatronics, already taking place for the fourth time, this year focusing on robotics turned out a great success for roTeg.
04-06-2009 | Logistics & Transport
roTeg AG
PARO Robot at the Hanover Trade Fair
roTeg AG to display the latest developments in robot palletting technology at North Rhine-Westphalia's joint stand Dortmund, März 2009 – At the Hanover Industrial Trade Fair in April 2009 Dortmund-based roTeg AG will be exhibiting modern automation technology. The PARO palletising robot with its PARO Control system is suitable for all industries and can be operated without any knowledge of programming. The engineering company roTeg AG will be exhibiting innovations in the
01-28-2009 | Logistics & Transport
roTeg AG
PARO at special-event area of Anuga FoodTec
roTeg AG takes care of palletising at the end of Robotik-Pack-Line Dortmund, Germany, January 2009 – Robotik-Pack-Line presents a complete production line for mini burgers at the special-event area of Anuga FoodTec in March 2009. After production and packaging of the food, the PARO palletising-robot system does the palletising of the trays. As a team partner of Robotik-Pack-Line, roTeg AG presents the new technology of the PARO palletising robot. A complete production