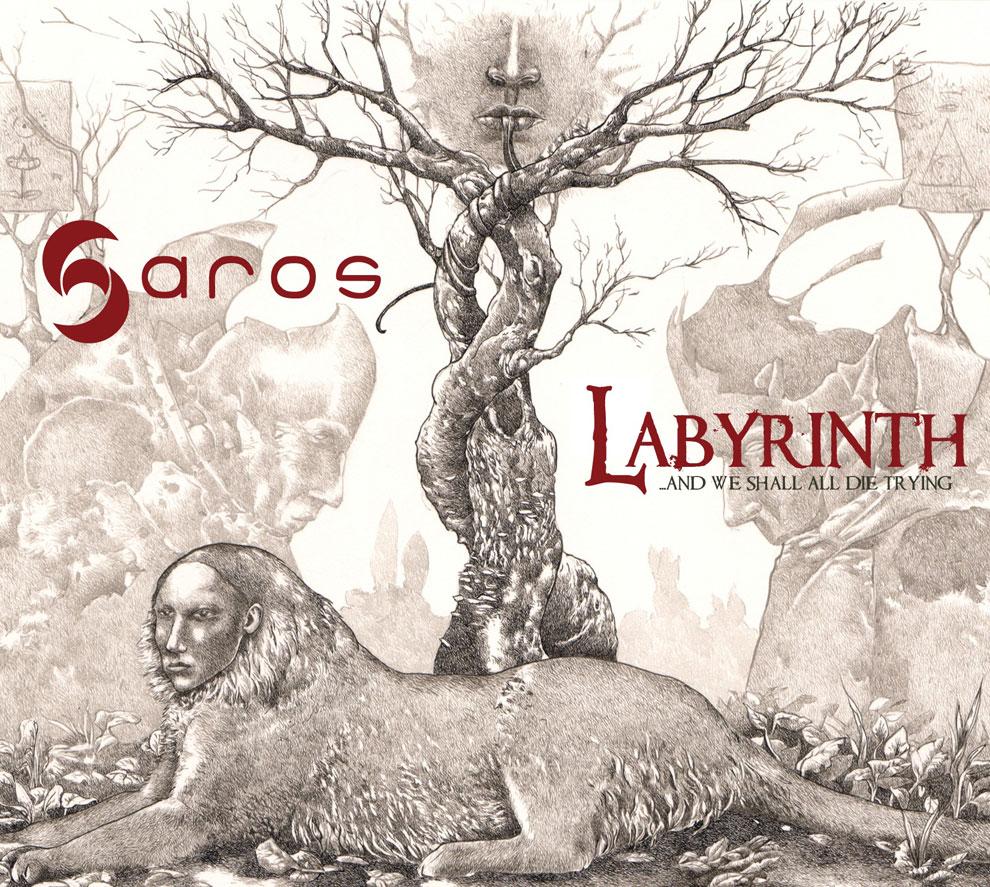 "The Riddle" by Richard A. Kirk stars on the cover of the "Labyrinth" album that presents Joerg Huettner's the music that accompanied Kirk's exhibition at Strychnin Gallery Berlin in 2008.

In 2008, Los Angeles based composer and producer Joerg Huettner, who has worked on the soundtracks of such films as "The Ring II" or "Batman Begins" for Hollywood star-composer Hans Zimmer, created exclusive music for the art exhibition “Labyrinth” at Strychnin Gallery Berlin, presenting Canadian artist Richard A. Kirk. The entrancing ambient-electronica instrumental album that is the soundtrack to the "Labyrinth" exhibition has now been released as a 45 minute-long gapless album that is available as a 6-panel Digipack CD with a 12-page poster-fold booklet through Strychnin Gallery or the usual online download centers (iTunes, Amazon, Magnatune.com).Besides intruiging down-tempo instrumental music, the digipack is a work of art in and of itself: its cover features Richard A. Kirk's work “The Riddle” and the beautifully designed album also contains additional art work by Kirk, as well as an excerpt from a novel by writer Tim Mizelle, which is based on and inspired by Kirkʼs art.Among many other things, Richard Kirk has created the album cover for US metal superstars “Korn” for their “Untitled” album in 2007, and has illustrated several books for the famous British writer and director Clive Barker. Kirk is represented by Strychnin Gallery.Joerg Huettner is an audio tech specialist, producer, composer and synth programmer based in Santa Monica, California. He founded the music production company "h-musix" in 2008.With galleries in three bustling hotspots – New York City, Berlin, and London – Strychnin Gallery is a playground for artists from all around the globe. It is a place where collaboration is encouraged, new projects are constantly developed and creativity is the one and only thing that truly counts.Owned by charismatic curator Yasha Young, Strychnin is dedicated to presenting emerging American artists to the European art world and vice versa. It features a variety of artists with particular individual styles rather than artists belonging to a collective “hip” movement. If you insist on putting a label on them, try lowbrow turned highbrow, pop surrealism or fantastic realism among others.Founded in Brooklyn in 1998, the gallery opened a European showroom in Berlin in 2002. The US gallery has since moved to a location in Manhattan’s Chelsea district, opening with a group show featuring over 70 artists in October of 2006. Strychnin Gallery opened a third location in East London’s vibrant art scene right off of Brick Lane in October 2007.The gallery participates in major international art fairs on a regular basis, including Bridge Art Fair, Liste, or Art21 in Cologne, which appointed gallery owner Yasha Young to its selection committee in 2008.Strychnin Gallery Boxhagenerstr. 36 10245 Berlin Germanywww.strychnin.compr contact: Iris Bitter production@strychnin.com +49 30 9700 2035

You can edit or delete your press release Huettner releases album with score to Strychnin Gallery exhibition "Labyrinth" by artist Richard A. Kirk here