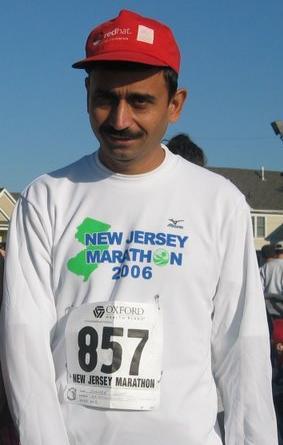 Tom Fleming's Boston Marathon Training Motto “Somewhere in the world someone is training when you are not and when you race him, he will win” has undoubtedly inspired a whole generation of runners across the globe. Marathon maniac Bhasker Sharma for whom distance running is a mission with passion firmly believes that there are no dreams too large, no innovation unimaginable and no frontiers beyond reach.This Techie is an IT professional from Bangalore who is very passionate about evangelizing running. He has been running for over 25 years now and took to running beyond 10 Kms in 2002 and got addicted to distance running after completing his first Full Marathon in January 2003 at Chennai. He has been playing a stellar role in Runners For Life - RFL a movement to popularize distance running in Bangalore.In year 2005 he participated in NJ Marathon (Long Branch) which was his first outside the country. Year 2006, he took the Standard Chartered Mumbai Marathon, NJ Marathon and Times of India Bangalore International Marathon. Year 2007 he went on to complete the Standard Chartered Mumbai, Flora London, Bangalore Midnight, SunTrust Richmond and the First Bangalore Ultra.Starting year 2008 with the Mumbai marathon he went on to Hyderabad Half and Full Marathon, RFL Kanakpura Road Run, Kaveri Trail, Bangalore Ultra and RFL Ballandur Run. Year 2009 has already put the Mumbai and Auroville marathons into his achievements and he is all set to take part in the SunTrust National Marathon http://www.nationalmarathon.com/ in Washington DC on 21st March. This is the 3rd edition of this marathon and the run is mostly through central Washington that is full of monuments as well as landmarks. The entry is restricted to a maximum of 3000 full marathon runners with additional stipulation of qualifying time of 5 hours. If you are still wondering who this maniac is, he is none other than Proud to be BITSian Bhasker Sharma who was a student of B.E. (Hons) EEE during 1974 - 1979 at Birla Institute of Technology and Science – BITS Pilani which is one among the top ranking universities in India today and was recently reaccredited by NAAC with “A” Grade and a CGPA of 3.71 out of 4. Currently apart from Pilani, BITS has campuses at Dubai, Goa and Hyderabad also.Bhasker’s goals include running the original historical course at the Athens Marathon and qualify for Boston Marathon by 2014. For men in the age group of 55 -59, Boston marathon requires a qualifying time of just 3 hours and 45 minutes. Bhasker who is in his early 50s who has completed 18 marathons so far is keen to reach 60 marathons by the age of 60.Bhasker draws his inspiration from Emil Zatopek quote "If you want to run, run a mile. If you want to experience a different life, run a marathon." While alumni of most institutions prefer to live in the glory of their alma mater, Bhasker who graduated from BITS Pilani prefers to add glory to his alma mater and remain a torch bearer for Brand BITS.Marathon maniac Bhasker Sharma Email bhskr@yahoo.com is indeed a dreamer performer achiever and the alumni of BITS Pilani from Australia to America take pride in congratulating and wishing him to conquer many more tracks in the years to come.About BITS: Birla Institute of Technology and Science - BITS Pilani is a Deemed University established under section 3 of the UGC Act. 1956 under notification no. F.12-23/63.U-2 dated 18th June, 1964.Dr BR Natarajan Professor & Vice President BITS Alumni Association BITS Pilani Rajasthan 333031 India Phone 91-1596-242210 Fax 91-1596-244183 Website http://www.bits-pilani.ac.in

03-18-2020 | Business, Economy, Finances, B …
Market Research Store
Global Deflazacort Market 2020 Marathon Pharmaceuticals, LLC
Deflazacort Market Global and outlook (2015 - 2025) The report published on Deflazacort is a invaluable foundation of insightful data helpful for the decision-makers to form the business strategies related R&D investment, sales and growth, key trends, technological advancement, emerging market and more. The global Deflazacort market report includes key facts and figures data which helps its users to understand current scenario of the global market along with anticipated growth.
04-10-2013 | Sports
Freiburg Marathon
Freiburg Marathon 2013: The jubilee marathon Freiburg and its special stories
11,056 runners took part in the 10th Freiburg Marathon at April 7th 2013. The marathon day with an overcast sky and temperatures around 8 degrees offered ideal exterior conditions for a fast race. The first runner to cross the finish line at the 10th Freiburg Marathon was the German Ulrich Benz. Exactly 2:31:31 hours after the start, Benz could enjoy the great feeling of winning – and not for the
06-25-2012 | Sports
Omron Healthcare
Marathon boom – How to choose the right one: Reasonable planning on registerin …
The fascination of a marathon captures more and more runners every year. Ambitious athletes all over the world aspire to experience the illustrious discipline of running. Increasing attendance figures and the variety of marathon events prove the ongoing boom. Nowadays, almost every big city organises a run; the choice of which to attend is immense. But not only the venues are wide-ranging; the types of marathons differentiate as well. From
05-10-2012 | Sports
New Jersey Marathon
Nearly 9,000 Compete In The New Jersey Marathon And Long Branch Half Marathon
Nearly 9,000 competitors ran, jogged, walked and wheeled their way through today's 16th Annual New Jersey Marathon and Long Branch Half Marathon on a cool, crisp, breezy morning down the Shore. Jason Page, 38, of Durham, N.C. won the men's marathon in 2:33:13, while Megan DiGregorio, 24, of White Marsh, Md., running in her first marathon ever, took the women's first place medal at 3:00:44. Samuel Spencer,
04-06-2011 | Sports
Potter County Visitors Association
God's Country Marathon Expands Business Sponsorship
COUDERSPORT, PA – The Potter County Visitors Association (PCVA) is announcing several new and expanded opportunities for businesses to reach the hundreds of runners and volunteers that participate in the 37th annual God’s Country Marathon, to be held on June 4, 2011. Among the new features are 26 new mile markers, street banners, and a new finish line banner. The new program will allow businesses to spread their message
02-24-2011 | Sports
Pikimal
Pikimal Creates Marathon Piki
PITTSBURGH, PA - Hundreds of thousands of people participate in marathons every year. It is a great goal to train for and achieve. However, choosing a race that fits your needs can be difficult. There are hundreds of great races all across the country and it’s difficult to know which are the best. Pikimal, an online decision engine, created a U.S. marathon Piki (think of it
Comments about openPR
9 o'clock: discuss press release with client, 10 o'clock: submit release to openPR, within the briefest possible time release is published and displayed in a prominent place on openPR.de. I am thrilled!
Zehra Spindler, Calypso Now! - Communication Agency