Freiburg Marathon 2013: The jubilee marathon Freiburg and its special stories 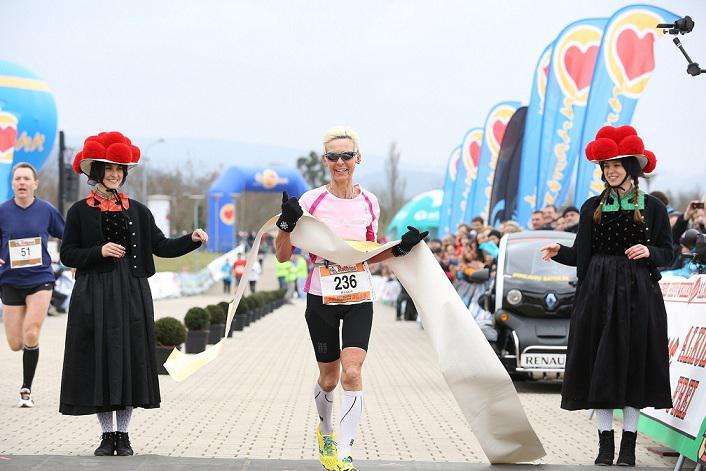 11,056 runners took part in the 10th Freiburg Marathon at April 7th 2013. The marathon day with an overcast sky and temperatures around 8 degrees offered ideal exterior conditions for a fast race. The first runner to cross the finish line at the 10th Freiburg Marathon was the German Ulrich Benz. Exactly 2:31:31 hours after the start, Benz could enjoy the great feeling of winning – and not for the first time: He won the premiere in Freiburg, the first Freiburg Marathon (2004) and also the 5th Freiburg Marathon (2008). What an accomplishment! What can we expect from Uli Benz at the 15th Freiburg Marathon in 2018? “In five years, I’ll be five years older,“ the mid-thirty points out at the press talk after the event. But organizer Gernot Weigl still has great expectations: “Uli is always prone for a surprise.”First one to speak was the winner of today’s women’s race over 42,195 kilometers, Heidrun Besler, who finished in 3:07:52 hours and was overwhelmed by the atmosphere in Freiburg: “I want to thank all the fans and the great audience. The atmosphere was great; I have never before experienced something like that.” Due to the low temperatures, Heidrun’s running time was a little bit worse than she had expected; however, she really deserves the victory, as she already starts in the age class W55. Sandra Reiss (3:11:59 h) and Miriam Engel (3:14:06 h) came in second and third among today’s women’s race.The men competition was characterized by many changes at the top of the field. The race’s second Thomas Klingenberger (2:36:52 h) had been leading the field for a while, expanding his lead at one point of the race to 200 meters. But Ulrich Benz exactly stuck to his race plan and passed Klingenberger at KM 33… and kept the first position. Third best of the day was Gerhard Schneble (2:37:30 h).“It’s great to win the 10th Freiburg Marathon. I have been dreaming about that and actually believed in it.” Uli Benz states further about his three Freiburg victories: “The most beautiful win was today, the most difficult in 2008 and the most surprising in 2004.”The half marathon in Freiburg is definitely the most popular running event in the region; today’s completion was won by Kathrin Müller and Gian Luca Borghesi. Müller, who lives in Freiburg, won in a time of 1:18:12 hours before Susanne Gölz (1:20:22 h) and Anja Röttinger (1:23:40 h). Borghesi from Rimini won in a time of 1:09:05 hours and was one of the many Italians who were in Freiburg for the marathon. Similar to Benz in the men’s marathon race, Borghesi passed the leading Daniel Hummel with a fantastic sprint. Hummel reached the third place (1:10:43 h) behind the second Felix Köhler (1:09:43 h).There are two kinds of relays in Freiburg: Adults run the marathon and pupils the half mara-thon. At the S`Cool Run, the half marathon relay for school teams, the audience could see an exciting race, with the young runners of the Droste Running Team winning among girls and boys. The marathon relay was won by the guest from Italy: Bellaria Igea Marina needed 2:31:07 hours for the 42,195 kilometers.Besides the successful athletes, also organizer Gernot Weigl and Dr. Bernd Dallmann from Freiburg Economy Tourist and Exhibition had something to say at the press talk. Dr. Dallmann (FWTM) was again actively taking part, a particularly wonderful experience at the jubilee: “That was my 10th and also my most beautiful Freiburg Marathon. It was a great birthday party.”Star guest Jeanette Biedermann with her band „Ewig“ summarized the atmosphere along the track: “Simply brilliant. The energy everywhere is fantastic. I was so excited that I almost for-get the text during one of ours songs.”Of course, the last statement at the press talk came from the host. “11,056 participants. We are very proud to be again over the magical boarder of 11.000 runners,” said Gernot Weigl from the organizing runabout sports Freiburg GmbH. He was live in one of the cars on the course and enjoyed it: “On the track was a lot going on.” Moreover, the prospects for the fu-ture are great, as the official German half marathon championships will be held in 2014 at the 11th Freiburg Marathon, an additional highlight that will attract many spectators and the best German athletes. In a couple weeks, there will be some calmer days for Gernot Weigl and his team, before the planning for 2014 will start. “A marathon consists of planning and good prep-aration,” Weigl underlines. With this ambition, the runabout sportmarketing GmbH works eleven months a year for this one marathon day… the jubilee marathon in Freiburg proved to be worth it of the ambitious work.Please find further information about the FREIBURG MARATHON at www.marathon-freiburg.com.FREIBURG MARATHON On April 4th 2013, the Freiburg Marathon had its 10th jubilee. Traditionally, the popular Marathon is one of the first big German running events and marks the start of the new marathon season in spring.Press service: Team Werbelabel Presseteam Freiburg Gottstein-März und Partner Roermonder Straße 279 D-41068 Mönchengladbach Tel: +49 (0) 2161 / 304 – 1183 Fax: +49 (0) 2161 / 304 – 1540 Mail: freiburg@werbelabel.de URL: www.marathon-freiburg.com

You can edit or delete your press release Freiburg Marathon 2013: The jubilee marathon Freiburg and its special stories here

03-06-2013 | Sports
Freiburg Marathon
Preparing for an Ultramarathon in Freiburg: If you are planning on long runs in …
Ultra runs are currently in vogue, there is no question about it. Marathons can already be counted as a standard discipline for many runners … an important occasion to see how fit a runner is, as well as a great opportunity to meet people with the same ambitions. The FREIBURG MARATHON 2013 is again such a “meet-and-greet” of ultra-runners, as there is an extremely active and sports-mad community in the city

02-10-2012 | Industry, Real Estate & Constr …
Xaloy Europe GmbH
Xaloy Europe GmbH and IMC Extrudertechnology GmbH sign cooperation agreement
Xaloy Europe GmbH and IMC Extrudertechnology GmbH have signed a cooperation agreement for production and finishing of screws and barrels on 30.08.2011. The cooperation covers the collaboration in the production and finishing of twin and single screws as well as of bimetallic cylinders on the basis of the production-knowhow of Xaloy. The main focus here will be the further development of innovative wear protection technologies. A joint investment in a central
04-04-2011 | Science & Education
Pabst Science Publishers
Psychological Test and Assessment Modeling: Quantitative approaches to the study …
Psychological Test and Assessment Modeling 1/2011 presents the special issue “Quantitative approaches to the study of self-regulated learning” II – presents the second half of five of the studies published in the previous issue (4/2010) on self-regulated learning, edited by Marion Porath, Heidrun Stoeger, and Albert Ziegler. Klug, Ogrin, Keller, Ihringer, and Schmitz remind us in their contribution of the importance of viewing self-regulated learning as a process. They show
01-26-2011 | Science & Education
Pabst Science Publishers
Psychological Test and Assessment Modeling: New approaches to the study of self- …
In Psychol Test Assess Model 4/2010, five studies highlight exciting new directions in the research of self-regulated learning (SRL). The studies focus on learning contexts, school and classroom practices, relationships among psychological constructs, and innovative measurement of SRL. Guest-Editors are Marion Porath, Albert Ziegler, Heidrun Stoeger. N.E. Perry, C. Thauberger, and L. Hutchinson report on how gStudy software and its associated learning kit supported young children in learning about the
10-23-2009 | Fashion, Lifestyle, Trends
Mafi Naturholzböden
mafi earns red dot design award
Design experts honour mafi fresco duna white in the red dot award: product design 2009 In one of the most renowned and hardest international design competitions, the red dot design award, the mafi fresco duna white by mafi – walk on art has just received an honourable mention from the top-class expert jury. With 3,231 products submitted to the competition, the product clearly stands out from the masses, because the design
Comments about openPR
9 o'clock: discuss press release with client, 10 o'clock: submit release to openPR, within the briefest possible time release is published and displayed in a prominent place on openPR.de. I am thrilled!
Zehra Spindler, Calypso Now! - Communication Agency