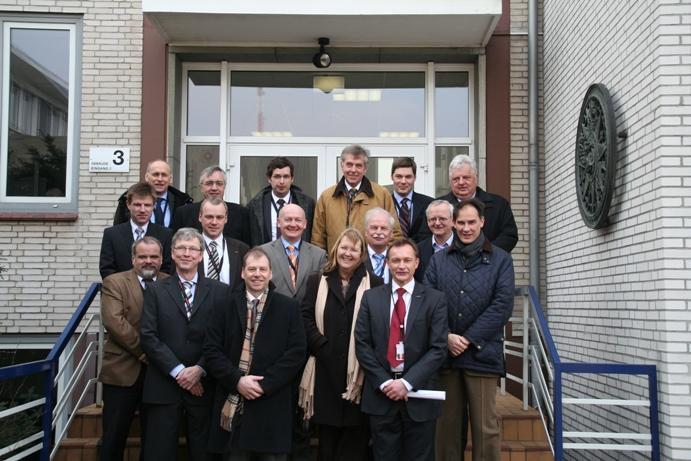 The 60. conference of the working group for „Defense Technology“ was hold at Raytheon Anschütz

On March 5th the working group for “Defence Technology” has hold its sixtieth conference at the premises of Raytheon Anschütz. The working group is an organisation of companies from German federal state Schleswig-Holstein, who are engaged in the defence business. The stated aim of the working group is to point out on the technological, economical and security-political relevance of defence technology. In order to share information, the working group gets together regularly. Based on its reputation as manufacturer of navigation systems for world wide navies, Raytheon Anschütz was elected to organize the sixtieth conference, which certainly is a little jubilee. In the foreground were the dialogue with Mr. Dr. Johann Wadephul, who is the chairman of the parliamentary party CDU within the legislative assembly of Schleswig-Holstein, and the preparations for the eleventh “Wehrtechnik-Dialog”, which is a political conference, in Berlin mid of June.Within its company presentation, Raytheon Anschütz has demonstrated its new multifunctional systems. The systems combine the functions of navigational radar, electronic sea chart and centralised navigation data display at one dedicated position on a ship’s bridge, providing access to all necessary information for navigation. Through integration of relevant navigational functions a major contribution to efficient watch keeping and increased safety at sea is made.Within the defence technology segment in Germany, Raytheon Anschütz acts as a traditional and reliable partner for national and international navies. Recently Raytheon Anschütz has been awarded to delivery navigation and steering systems for the second batch of U214 for die Korean Navy. In addition, Raytheon Anschütz will also supply most modern navigation technology, including multifunctional systems, for the future frigates of class F125 to the German Navy. For their corvette project K130 the German Navy has specified an Integrated Bridge solution for the first time. The system, delivered by Raytheon Anschütz, has achieved excellent reputation regarding system design and functionality.Raytheon Anschütz GmbH is a subsidiary of the Raytheon Company (USA) and belongs to its Integrated Defense System division. As a supplier of integrated navigation solutions for commercial and naval ships the company has a broad range of own products, which covers e.g. gyro compasses, ring laser gyros and satellite compasses, autopilots and steering control systems, ARPA-Radars, electronic sea charts (ECDIS). All activities such as R&D, system engineering, production and service are concentrated at the headquarters in Kiel, Germany. Raytheon Anschütz has more than 500 employees and maintains a service network with 200 stations world wide.Raytheon Anschütz GmbH Zeyestr. 16-24 D-24106 Kiel Germanywww.raytheon-anschuetz.comPress Contact: Martin Richter Marketing Support Manager Tel.: +49 431 3019 712 Fax: +49 431 3019 94712 E-Mail: martin_richter@raykiel.com

04-28-2020 | Business, Economy, Finances, B …
Your German Mortgage
Find the best conditions for your German mortgage with Your German Mortgage
During times of the Coronavirus, we are here to help you with finding the right financing for your property. Special times call for special measures, that's why it's now more important to find a trustworthy and experienced mortgage broker than ever. We got you covered from finding your property of dreams all the way to financing it. To ensure that, we have experts in almost every German major city,
11-16-2018 | Politics, Law & Society
i.b.s. International Operative Services e.K.
German Maritime Security 2018, German Government Statement!
Despite all international and national efforts, piracy remains a serious peril for the international shipping industry. Especially in Asia (i.e. Chittagong/Bangladesh or on the Strait of Malacca), but also in South America (e.g. Bay of Santos/Brazil or in the port of Callao/Peru) robbery or piracy there has recurred in the recent past. At the West African coast the number of incidents had raised even by 50% with 66 incidents this
07-26-2017 | Business, Economy, Finances, B …
Teck Language Solutions Inc.
More German Investments Mean More German Translations
Why Language Continues to be an Obstacle for Investing in Germany Germany is one of the prime markets for foreign investments, with an estimated 4% of global direct investment making its way into the country. In fact, the world’s second richest man, Warren Buffett, who is only beaten to the top spot on the financial leaderboard by Microsoft Founder Bill Gates, believes Germany to be a ‘great market’, and confirms the
08-18-2015 | Industry, Real Estate & Constr …
IKA®-Werke GmbH & Co. KG
German Design Award 2015
German Design Council Awards a Special Mention to the LR 1000 Laboratory Reactor and Nominates the Tube Mill Staufen, Germany, February 23, 2015 — For the second time, a device produced by IKA® Werke has received the "Special mention for exceptional design quality" award from the German Design Council. The company was presented with the award in the "Excellent Product Design — Industry" category as part of the German Design Award 2015
12-24-2011 | Politics, Law & Society
bunk-alliance Rechtsanwälte
German Local Trade Tax
All the companies in Germany are liable to pay not only corporate income tax, whose rate is nowadays about 15% of the annual profit of the company, but also trade tax (Gewerbesteuer), which is a tax of German characteristics. Why would we say that trade tax is of German characteristics? Because it is different from the corporate income tax, which is charged by the German Federal Government and it is difficult
05-20-2008 | Leisure, Entertainment, Miscel …
SkatMedia
ISPA – German Masters 2008
Magdeburg – Over the long weekend of the 4. Mai more than 1.000 Skat players filled the Mittelland hall in Barleben. The tournaments of the 30. German Mastery and the 27. open International German Single Mastership were held by the International Skat Players Association, ISPA Germany. Patrons of the Games were the 1st Barleber Skat sports club e.V. and the Skat club \"Burger Ihleskater\", whose good organization together with the
Comments about openPR
OpenPR is clearly structured and remains true to its principle of confining itself to the essential parts. OpenPR has proven to be a very good and reliable partner to our media agency: Within the shortest time the releases are online and go down well with the media representatives. The success of OpenPR is reflected in the steadily increasing number of press releases. It is good that OpenPR exists!
Ursula Koslik, Director Marketing & PR, F+W Hamburg