In Our Own Image. A Two-Man Show featuring Raf Veulemans and Marc Janssens. Paper installation by Christina Graf 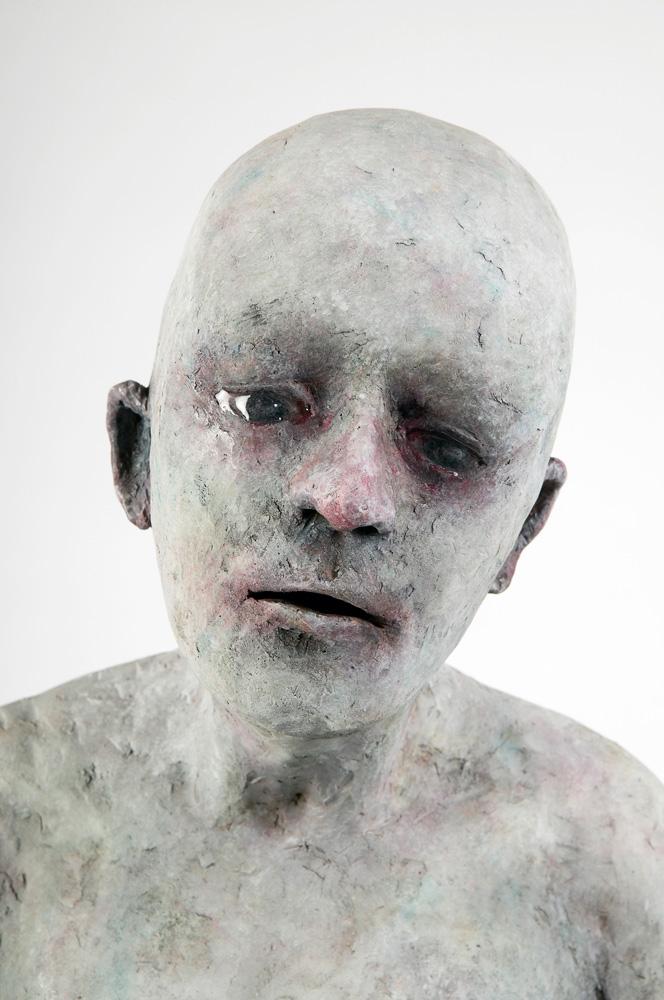 Sculptures by Belgian artist Mark Janssens can be seen with works by Raf Veulemans and Christina Graf at Strychnin Gallery Berlin from March 6th until March 22nd.

Belgian artists Veulemans and Janssens have one thing in common: they share a passion for the eternal conflict between good and evil, life and death. In their works, this conflict is played out very differently though - while Veulemans stresses the beauty of decay and fragility of life in his taxidermist sculptures and installations featuring the bodies of real animals, Janssens’ sculptures are completely man-made and focus on the struggle of overcoming a mere physical existence. Often, his figures appear to wish they could escape from the sufferings their bodies are exposed to by battered machines and strange apparatuses holding them captive, and to release their battered spirits. American artist Christina Graf’s delicate paper installation titled “Merry-Go-Sorrow” will be presented in The Vault, Strychnin’s back room that is reserved for individual artists on special occasions. Opens Friday, March 6th at 7 p.m. Raf Veulemans, whose works have been exhibited in New York, London, Berlin as well as all over his native Belgium, discovered his passion for drawing and nature early in life. It wasn’t until his late twenties though that he finally decided to make something of his talent. Finding his trademark in a combination of airbrush and taxidermy, Veulemans is fascinated by everything surrounding death. In his works, he is trying to understand why it is that Western culture appears to be frightened by what he considers to be a natural part of life, and his works question our preconceptions regarding this subject. About his works, Veulemans says “ I want to show the animals in death how they are in life– soft and innocent. I try to breathe life and beauty back into them. I am fascinated by their fragility, and I want to eternalize their– and also our own– mortality, our shared perishable existence. I believe that what may seem shocking from afar can be beautiful up close.” It is important to him to stress that all the animals in his works have died from natural causes and that no animal is hurt in any way in the creation of his works. Most of them are found, come from breeders, taxidermists, or museum collections that have been closed down. Some of his works are even statements against animal testing and their use in scientific experiments. Marc Janssens received his formal training as an artist from several different institutions in Belgium, among them the Graphic Art.Academy for the Arts and the Sculpture Academy for the Arts, both in Mol, Belgium. For the later, Janssens focus was on Ceramics. His mixed media sculptures are made of metal, ceramics, dirt, dust, hair, and wood among other things, incoprorating found objects as well as machines of his own design that serve no apparent purpose. Janssens sculptures picture strange human beings sometimes quite literally trapped by human inventions - houses, airplanes, chairs – often depicting the (domestic) prisons we build ourselves in our lives. Claustrophobic yet sometimes also quite humorous, such as his series of works featuring the mummies of fairy tale characters such as Pinocchio or Snow White, Janssens works have been exhibited internationally and are extremely successful. Christina Graf’s fascination with paper stems from owning a pet Tarantula as a child: after each shedding, the spider's old skin was left behind, completely intact, like frozen remnant of an existence - a hollow twin representing both life and death. Inspired by the idea of molting, she began creating sculptures using paper, which – in both strength and vulnerability - resembles skin. Besides the reference to human form, she use shapes of clothing as another source of inspiration because, much like skin, clothing is a token that holds connotations of an individual's life and personal experience. Graf’s new body of work is called "Merry-Go-Sorrow", combining the happiness of child’s play with the recurring sorrows of adult life. Ghostly paper dresses; paper cutwork and shadows conjure a feeling of nostalgia, and gauzy memory in a life-size tableau of melancholy dream. Graf received a MFA in Visual Arts from C.U.N.Y. Queens College and has taught art classes at Rutgers University. Graf maintains an artist's studio in Brooklyn, NY. Her work has been exhibited internationally and she has received several awards, including an Artistic Accomplishment Award from The Morris Museum (Morristown, NJ). She last exhibited at Strychnin Gallery Berlin in 2008. Raf Veulemans and Marc Janssens: In Our Own Image. Also featuring “Merry-Go-Sorrow” - A Paper Installation by Christina Graf in The Vault, Strychnin Gallery's back room. Opening night: March 6th at 7 p.m. Show runs from March 6th – April 5th 2009 Opening times: Thursday through Sunday from 1 p.m. until 6 p.m. - Friday and Saturday until 7 p.m. With galleries in three bustling hotspots – New York City, Berlin, and London – Strychnin Gallery is a playground for artists from all around the globe. It is a place where collaboration is encouraged, new projects are constantly developed and creativity is the one and only thing that truly counts. Owned by charismatic curator Yasha Young, Strychnin is dedicated to presenting emerging American artists to the European art world and vice versa. It features a variety of artists with particular individual styles rather than artists belonging to a collective “hip” movement. If you insist on putting a label on them, try lowbrow turned highbrow, pop surrealism or fantastic realism among others. Founded in Brooklyn in 1998, the gallery opened a European showroom in Berlin in 2002. The US gallery has since moved to a location in Manhattan’s Chelsea district, opening with a group show featuring over 70 artists in October of 2006. Strychnin Gallery opened a third location in East London’s vibrant art scene right off of Brick Lane in October 2007. The gallery participates in major international art fairs on a regular basis, including Bridge Art Fair, Liste, or Art21 in Cologne, which appointed gallery owner Yasha Young to its selection committee in 2008. Strychnin Gallery Boxhagenerstr. 36 10245 Berlin www.strychnin.com PR Kontakt: Iris Bitter +49 30 9700 2035

You can edit or delete your press release In Our Own Image. A Two-Man Show featuring Raf Veulemans and Marc Janssens. Paper installation by Christina Graf here