Italian True Fleet with a marginal drop in July 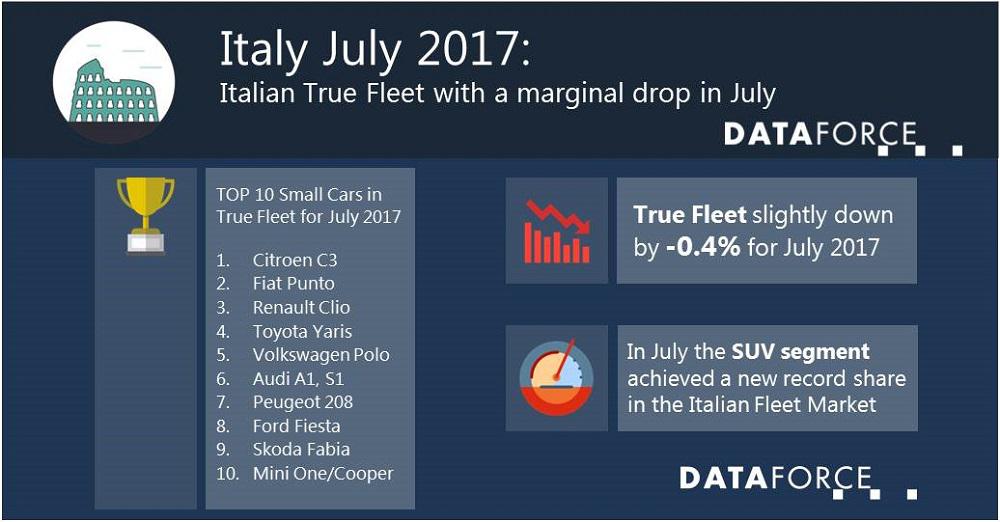 Following a very positive first half year 2017 with a growth of + 9.3% the July True Fleet figures were slightly below the ones from 2016 (- 0.4%). This is still a strong performance when taking into account that last year’s volume was the best July since 2008. The Total Market achieved about 153,000 registrations generating a very healthy + 8.8% but that was mainly fuelled by Special Channels delivering a + 26.4% while private customers registered 6.4% more new passenger cars.Brand performance: Double-digit growth for 5 out of the Top 10 OEMs in True Fleet The market leader Fiat showed an impressive stability with only 8 registrations less than in July last year. With + 15.0% Audi was able to jump from rank number four into second position. Especially the SUV models Q5 and Q2 contributed a lot to that positive result. The Q5 climbed ten positions and was ranked number four in the SUV segment behind Fiat 500X, Jeep Renegade and Nissan Qashqai and was followed by Alfa Romeo’s Stelvio hot on its heels, a car which might soon be on the podium in this segment.Back in the brand ranking, Mercedes retained the 3rd position but suffered a volume decline. The same is true for Volkswagen, Ford, Renault and BMW who claimed ranks 4 to 7. Peugeot in 8th position achieved an increase of + 7.7% followed by a pack of four brands which probably will be quite happy with their impressive July results: Opel (+ 21.3%), Citroën (+ 51.6%), Alfa Romeo (+ 91.4%) and Toyota (+ 31.0%).Citroën C3 – Heritage of Fiat Punto? Although the SUV segment was (again) really strong and even scored a new all-time record share of 36.0% Citroën proved that it’s not impossible to shine in other car segments. The new C3 is a perfect example for that: + 881,5%, second highest volume in the Italian True Fleet Market so far, highest market share ever and leading the Small Car segment for the very first time. Well done. Generally this segment is in good shape with + 29.1% in July and + 31.6% year-to-date.Diesel demand: Dip in Fleets but surprisingly stable in Private With diesel staying in focus, we investigated this fuel type’s evolution by market segments. In True Fleets the registrations dropped by -7.3% which reduced the diesel share by 5.8 percentage points. This is pretty much in line with France, Germany, Spain and the UK where the Diesel lost between 6.0 and 9.5 pp in market share.If you carry out the same analysis for car registrations on private households the results are quite different. The diesel share is almost unchanged with just a - 0.4 pp (from 53.3% to 52.9%). Diving deeper into the data shows that it were growing diesel registrations from German brands that stabilised the private diesel market and that a notable percentage of these cars already had a temporary number plate in another country before they became a new registration in Italy. This trend started in January and is still going on. It will be certainly worth watching over the next couple of months. (521 words; 2,982 characters)Publication by indication of source (DATAFORCE) onlyDATAFORCE – Focus on Fleets Dataforce is the leading provider of fleet market data and automotive intelligence solutions in Europe. In addition, the company also provides detailed information on sales opportunities for the automotive industry, together with a wide portfolio of information based on primary market research and consulting services. The company is based in Frankfurt, Germany.Michael Gergen Dataforce Verlagsgesellschaft für Business Informationen mbH Hamburger Allee 14 60486 Frankfurt am Main GermanyPhone: +49 69 95930-231 Fax: +49 69 95930-333 Email: michael.gergen@dataforce.de www.dataforce.de