Conveyors for the solar industry 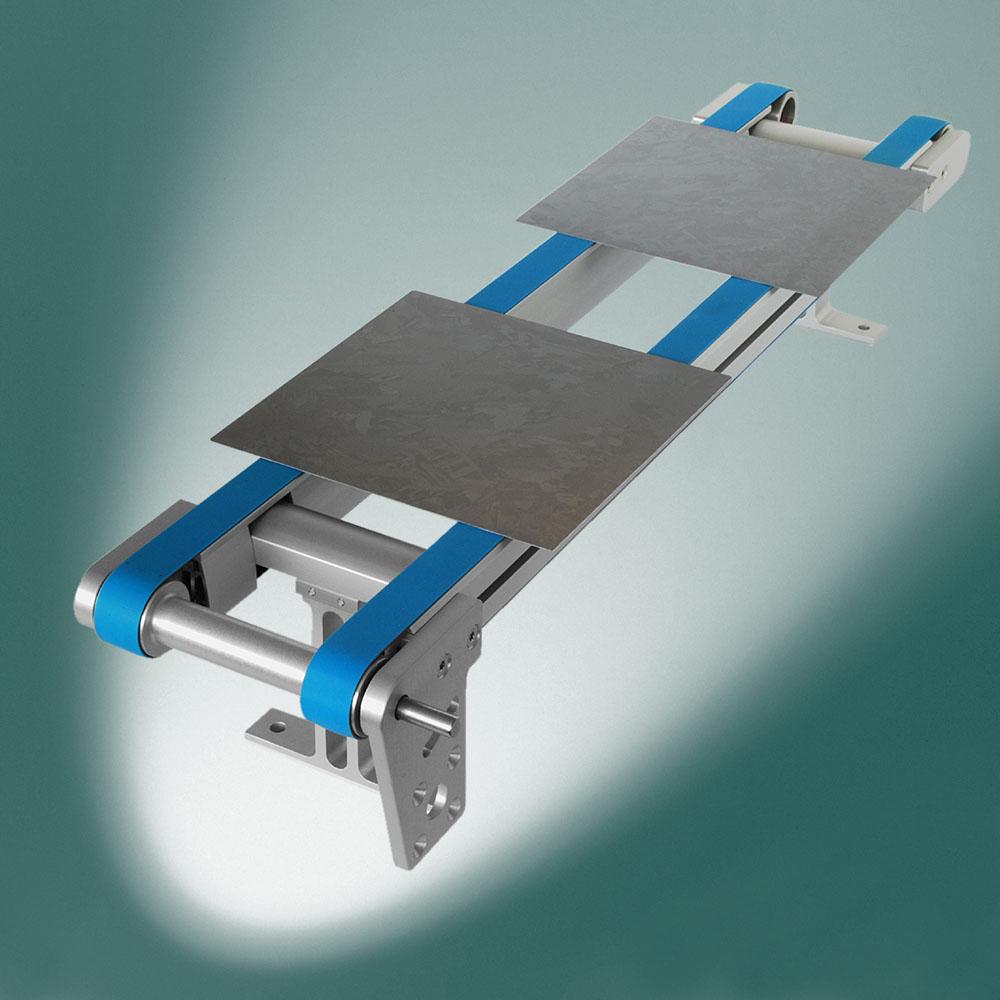 The belt conveyor for wafers developed by Montech

Montech will be introducing its conveyors designed for the solar industry at the Photovoltaic Technology Show 2009, in Munich from March, 4-6 2009 in Hall C2, Stand D8. The Swiss company has developed a belt conveyor specifically designed for wafer transport.The belt conveyor for wafers consists of a supporting frame and two belts driven in synchronous mode. Possible wafer debris can be discharged through the open gap between the two belts. The wafer conveyor can be used in wet and dry processes. With the new conveyor, the manufacturers of turnkey plants for the solar industry and equipment for the processing of wafers or solar cells can carry these delicate parts in their plants.Adapting to requirements Thanks to its modular concept, the belt conveyor can be tailored to the specific needs of each user in terms of length and width. The conveyor structure can also be selected freely and adapted to each machine individually. The conveyor can be supplied complete with belt or toothed pulley. Among the peculiarities of the wafer conveyor, the whole structure can be assembled and dismantled from above, and the belt itself can be replaced without disassembling the supporting frame.No protruding elements The wafer conveyor developed by Montech has no protruding parts that might interfere with transport. In this way, delicate wafers are carried with high accuracy and great care. The cost of spare parts is limited, as the belt conveyor consists of few components.“With the belt conveyor for wafers, we have created a specific solution for the product and process needs of the solar industry”, said Gianluca Aloisi, Conveyors Division Manager, Montech AG. According to Aloisi, as a belt conveyor specialist, Montech can provide customers with a specific solution for their needs, allowing them to focus on their core business.Montech AG markets basic modular components that automate demanding production and logistics processes. In addition to conventional conveyor belts, automation components and the Quick-Set profile system, the range of products also includes the Montrac transport system. Montrac is an intelligent transport system for networking industrial production and logistics processes. Founded in 1963, the company is based in Switzerland and stands for innovation in the automation industry.Montech AG Gewerbestrasse 12 CH-4552 Derendingen Phone: +41 (0) 32 681 55 00 Fax: +41 (0) 32 682 19 77 www.montech.com E-Mail: info@montech.com Presscontact: Elke Manthei Phone: +41 (0) 32 681 55 42 E-Mail: elke.manthei@montech.com

09-30-2011 | Industry, Real Estate & Constr …
Montech AG
Optimized wafer sorting using belt conveyors
Using the modular belt conveyors by Montech, user can optimize wafer and cell sorting in the solar industry. A solar conveyor brings the wafers/cells, a vacuum conveyor transfers the wafers/cells to carriers or boxes after sorting, and finally, a closed-loop transfer system carries away the carriers or boxes. Montech exhibited this application for the first time at the European Photovolatic Solar Energy Conference and Exhibition 2011 in Hamburg, where it
02-04-2011 | Health & Medicine
Montech AG
MEDTEC 2011: transport and handling solutions from Montech for the medical indus …
The Swiss belt conveyor specialist Montech AG is exhibiting at MEDTEC 2011 in Stuttgart, showing specific transport systems and handling components for the medical equipment sector. At the Montech stand 6333 in Hall 6, visitors will find, among other things, the Vacuum conveyor, the cleanroom conveyor and specific handling components for the medical industry. “Our belts are manufactured with valuable materials that meet the sophisticated requirements of medical technology,” says Gianluca
10-19-2010 | Industry, Real Estate & Constr …
Montech AG
Vacuum conveyor for 4,000 wafers per hour
The Swiss conveyor specialist Montech AG has developed a new vacuum conveyor that can handle 4,000 wafers per hour. The new vacuum conveyor, which can also be used as an overhead conveyor, carries several wafers simultaneously, running at speed up to 5 meters that allow handling 4,000 wafers per hour. Compared to other handling solutions, Montech’s Vacuum conveyor handles delicate wafers more smoothly and has a smaller footprint. The system can
03-11-2010 | Logistics & Transport
Montech AG
Montech at Photovoltaic Technology Show: new and proven conveyor and handling so …
At the Photovoltaic Technology Show 2010 in Stuttgart, the belt conveyor manufacturer Montech is introducing new and proven solutions to carry and handle wafers, cells, carriers and modules in the solar industry. From 27 to 29 April 2010, the Photovoltaic Technology Show visitors will find the full range of Montech’s belt conveyors specifically designed for the solar industry, in Hall 4, Stand J22: solar conveyors, unloading conveyors, swiveling conveyors,
02-04-2010 | Logistics & Transport
Montech AG
Montech at LogiMAT 2010
The Swiss intralogistic specialist Montech AG is exhibiting at LogiMAT 2010, showing the Montrac transport system and its range of belt conveyors. From 2 to 4 March 2010, at LogiMAT, Hall 1, Booth 407, Montech will show how many companies could optimize their intralogistic and increase efficiency by adopting the Montrac system. “The efficiency of operations in all company areas, especially intralogistics, is more and more critical,” said Gianluca Aloisi,
10-30-2009 | Energy & Environment
Montech AG
24th European Photovoltaic Solar Energy Exhibition: specific solutions from Mont …
At the 24th European Photovoltaic Solar Energy Conference and Exhibition (PVSEC), from 21 to 24 September 2009 in Hamburg, Montech presented specific solutions for the transport and handling of wafers, cells and carriers. With over 40,000 visitors, PVSEC was one of the major exhibitions for the photovoltaic industry this year. In Hamburg, 943 manufacturers, suppliers and service providers from all around the world exhibited their innovations on a 65.000 sqm area.
Comments about openPR
Your portal is fast, simple, and easy to use. Others may have more functions but they also demand more editing time, you have to preformat the text in order to achieve a good result etc. I think openPR is really fantastic!
Andreas Knepper, wallmedien AG