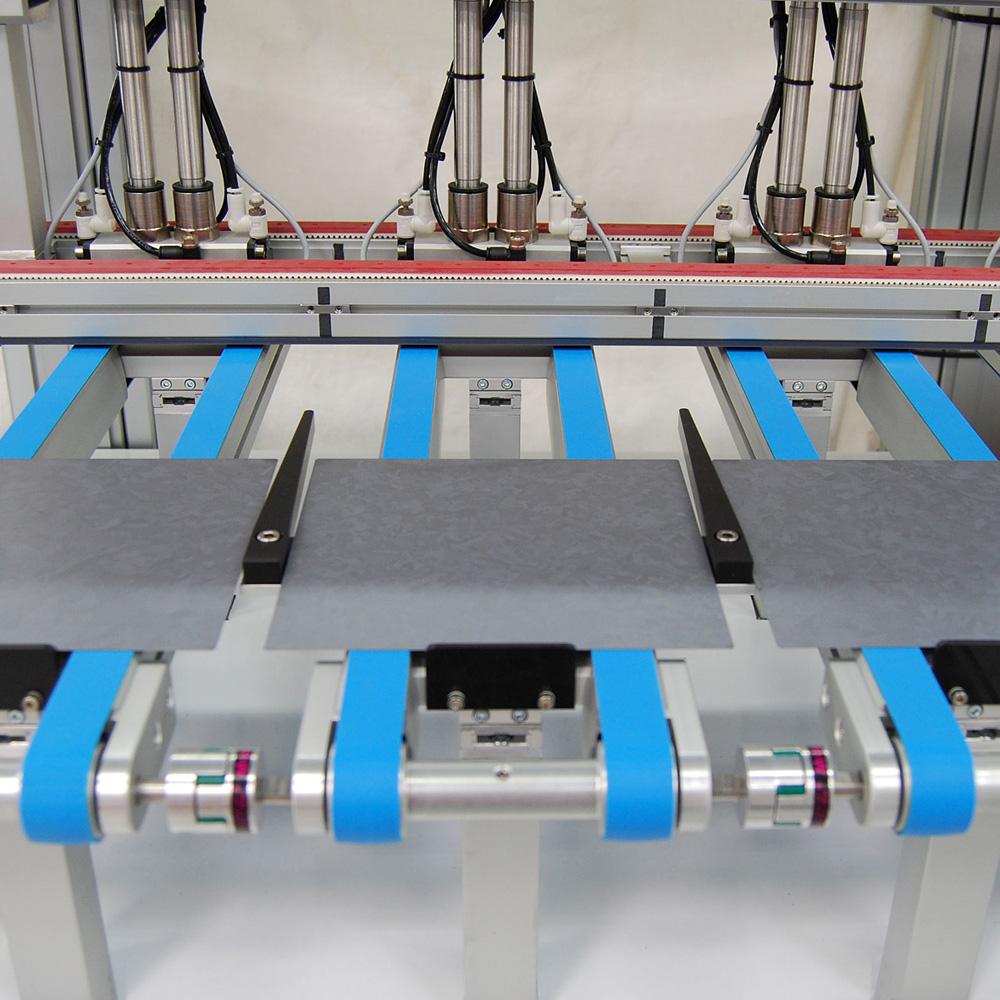 The Vacuum conveyor can carry wafer from many to one track and from one to many.

At the European Photovoltaic Solar Energy Exhibition (EU PVSEC) in Hamburg, Montech AG is displaying new solutions to sort and turn over wafers and cells.Among other things, the Swiss company is presenting a new sorting system for wafers and cells, built with Montech's standard components. “It’s an endless working cycle, without unproductive return track, that optimizes the sorting process,” explains Gianluca Aloisi, Sales Manager, Montech AG. Another innovation presented by the belt conveyor and handling system specialist is designed for turning over wafers and cells. According to Aloisi, the solution developed by Montech solves efficiently the problem of turning over parts. Furthermore, the solution offers smoother handling and greater flexibility compared to rotary wheels normally used in the photovoltaic industry.Belt conveyors with integrated drive for the solar industry By integrating the motor into the construction of belt conveyors for the solar industry, Montech has solved the problem of space on systems with external motors. In Solar conveyors and Vacuum conveyors, drive and motor are both integrated in the table stand of the belt conveyor. “The integrated motor is very small and compact, but it delivers the same power as a big motor,” Aloisi says. Over 4,000 wafers per hour with the Vacuum conveyor At EU PVSEC, Montech is showing the Vacuum conveyor, designed to carry several wafers simultaneously, running at speed up to 5 meters that allows handling more than 4,000 wafers per hour. The vacuum conveyor, which can also be installed as overhead conveyor, can carry parts from many to one track and from one to many, thus creating a fully "chaotic" operation consistently with Montech's Chaos Technology. Specific conveyors for the solar industry Other solutions developed by Montech specifically for the production needs of the photovoltaic industry include the unloading conveyor, the centering conveyor for accurate wafers alignment and the short conveyor to check wafer edges. The removal module can rotate wafers and cells by 90 degrees thanks to its vertical motion capability, while the swiveling conveyor enables to discard defective parts by picking them from the line without slowing down the production. Belt conveyor for modules For the smooth transport of thin film solar modules and panels between different processing stations, Montech offers a conveyor with two, three or four lanes with belts or toothed belts. The conveyor is available with three different drives with spur gear motor and accurately defined acceleration and braking ramps. Visitors at EU PVSEC will have the opportunity to see all new conveyor and handling solutions developed by Montech at Booth B23 in Hall A4.Montech AG markets basic modular components for the automation of demanding transport, assembly and production processes. In addition to conventional conveyor belts, the product range includes automation components and the Quick-Set profile system. A specialist in standard and customized transport and conveyor systems, Montech offers an ideal combination of customer-specific solutions with a high degree of standardization. Founded in 1963, the company is based in Switzerland and stands for innovation in the automation industry.Montech AG Gewerbestrasse 12 CH-4552 Derendingen Phone: +41 (0)32 6815500 Fax: +41 (0)32 6821977 E-Mail: info@montech.com www.montech.comPresscontact: Elke Manthei Phone: +41 (0)32 6815542 E-Mail: elke.manthei@montech.com

You can edit or delete your press release EU PVSEC 2011: New Solutions from Montech for photovoltaic industry here