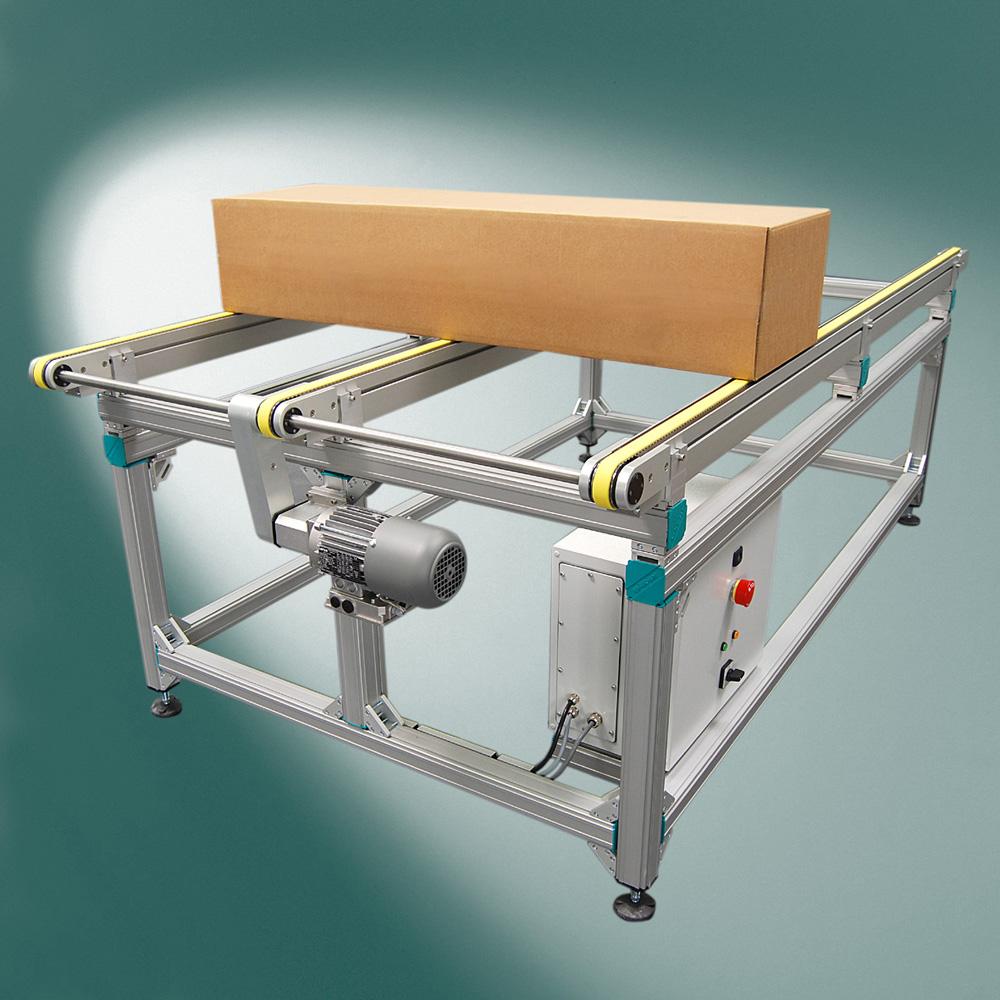 At Automatica 2010 in Munich, Montech is introducing a new multitrack conveyor. Other highlights include a special application of Montrac and the full range of belt conveyors, automation components and solar conveyors. At Automatica and Intersolar, taking place concurrently in Munich, visitors at the Montech stand 318 in hall B1 will find consolidated solutions and the latest innovations for transport, handling and intralogistics from the Swiss company.New: multitrack conveyor To convey cumbersome and heavy pieces, Montech offers a multitrack conveyor with belts or toothed belts, which can carry weights up to 100 kg. The conveyor is available with three different drives with spur gear motor: one by inverter, one by inverter plus integrated point-to-point positioning or fixed speed. The smooth and delicate handling of pieces is guaranteed by accurate acceleration and braking curves. “Shortly, we will also achieve certification for clean room applications,” announces Gianluca Aloisi, Sales Manager, Montech.New tasks for Montrac In the past few years, the Montrac system was used in several intralogistic and industrial applications: transport of vehicle headlight components from warehouse to working stations, transport of glass lenses, interlinking of injection molding machines, connection of manual and automatic working stations for car and truck rearview mirrors, automated box handling. At Automatica, Montech will set up a new and original application for Montrac: the transport system will carry beverages. According to Aloisi, Montrac offers smooth, accurate and safe handling of any kinds of objects, standing out as an ideal solution for exhibitions, museums, showrooms, libraries and catering. Aloisi: “An original application of Montrac can be found in the Swiss Museum of Transport, which adopted Montrac as the core of a handling system for the presentation of 3000 Matchbox cars.” Conveyors based on standard components The belt conveyors in standard, Minidrive and Maxi versions are designed to carry parts to or from the various manufacturing stations or they are combined to form complete production lines. The linear transfer LTE by Montech is a longitudinal asynchronous transfer system to convey pallets automatically through working stations for assembly operations.The Montech conveyors are based on a modular concept with ready-to-use standard components. Thanks to their modularity, the conveyors can be assembled in variable configurations, extended or shortened with a simple and cost-effective approach. “With their modular construction, all belt conveyors by Montech are very suitable for customer-specific transport solutions,” underlines Aloisi. The conveyors have standard widths included between 45 and 800 mm, while their length can be selected freely up to 15 meter length in one millimeter steps. The conveyors can carry weights up to 125 kg.Automation components, high flexibility Users can achieve high flexibility with the electrified automation components: grippers, rotary drives, universal compact slides and Servoline. In electric grippers, the gripping strength and speed can be adjusted independently. The electrically operated rotary drive DAE-60 can move into different positions (up to 31 programmable positions), traveling at different speeds between one position and another. All electrified handling components can be driven by the same regulation device. The preset settings of the regulation device provide for very easy and quick commissioning. In addition, the digital I/Os allow very easy control.Conveyors for the solar industry Intersolar and Automatica visitors at the Montech stand will find the full range of belt conveyors for the solar industry: Solar conveyor, unloading conveyor, swiveling conveyors, centering conveyor, removal module, short belt conveyor, vacuum conveyor and the new conveyor for modules.Montech AG markets basic modular components that automate demanding production and logistics processes. In addition to conventional conveyor belts, automation components and the Quick-Set profile system, the range of products also includes the Montrac transport system. Montrac is an intelligent transport system for networking industrial production and logistics processes. Founded in 1963, the company is based in Switzerland and stands for innovation in the automation industry.Montech AG Gewerbestrasse 12 CH-4552 Derendingen Phone: +41 (0)32 6815500 Fax: +41 (0)32 6821977 www.montech.com E-Mail: info@montech.com Presscontact Elke Manthei Phone: +41 (0)32 6815542 E-Mail: elke.manthei@montech.com

12-23-2010 | Industry, Real Estate & Constr …
Montech AG
Montrac presents automated warehouse integration at LogiMAT 2011
The monorail transport system Montrac allows to create a link between warehouse and production, for instance. This application, interesting for companies across several industries, will be presented by the Swiss manufacturer at the upcoming LogiMAT in Stuttgart, Hall 3, Booth 171. The self-moving shuttles, equipped with a belt for automatic loading and unloading, travel between the warehouse and production area according to the instructions of the central control system, running on
02-04-2010 | Logistics & Transport
Montech AG
Montech at LogiMAT 2010
The Swiss intralogistic specialist Montech AG is exhibiting at LogiMAT 2010, showing the Montrac transport system and its range of belt conveyors. From 2 to 4 March 2010, at LogiMAT, Hall 1, Booth 407, Montech will show how many companies could optimize their intralogistic and increase efficiency by adopting the Montrac system. “The efficiency of operations in all company areas, especially intralogistics, is more and more critical,” said Gianluca Aloisi,
10-30-2009 | Energy & Environment
Montech AG
24th European Photovoltaic Solar Energy Exhibition: specific solutions from Mont …
At the 24th European Photovoltaic Solar Energy Conference and Exhibition (PVSEC), from 21 to 24 September 2009 in Hamburg, Montech presented specific solutions for the transport and handling of wafers, cells and carriers. With over 40,000 visitors, PVSEC was one of the major exhibitions for the photovoltaic industry this year. In Hamburg, 943 manufacturers, suppliers and service providers from all around the world exhibited their innovations on a 65.000 sqm area.
10-13-2009 | Logistics & Transport
Montech AG
Optimized intralogistics with Montrac
The Montrac transport system by the Swiss company Montech optimizes intralogistic operations and increases productivity. “The issue of intralogistics is becoming more and more important,” says Yves Dicke, Manager Montrac of Montech. More and more companies are willing to deploy automated solutions to transfer small plastic parts produced by their injection molding presses. “Normally, the parts are transported manually or by means of fork-lift trucks to a buffer area,
07-01-2009 | Logistics & Transport
Montech AG
Matchbox cars ride with Montrac
Inaugurated on 27 June 2009, the new Road Transport Hall of the Swiss Museum of Transport in Lucerne is equipped with a Montrac system handling the presentation of 3000 Matchbox cars. The idea to present the Matchbox cars with a Montrac system was conceived and developed by the museum in cooperation with Montech. 40 shuttle run along 36 meters of monorail track, carrying 3000 miniature models from all categories and times. The
06-04-2009 | Logistics & Transport
Montech AG
New set-up for Montrac in the Americas
FlexLink and Montech agree to a new distribution partnership for the Montrac monorail pallet system in North and South America. The Montrac monorail pallet based conveying system is recognized for its high-tech production logistics applications in manufacturing, assembly, and test processes. It is used within the electronics, health care, and plastics industries in clean room applications up to class 10. FlexLink and Montech have entered into a partnership to increase
Comments about openPR
We publish our press releases on openPR.de because we like people who are "open" - just like us.
Frank Obels, CEO, INCONET - Informationssysteme, Communication und Netzwerkberatung GmbH