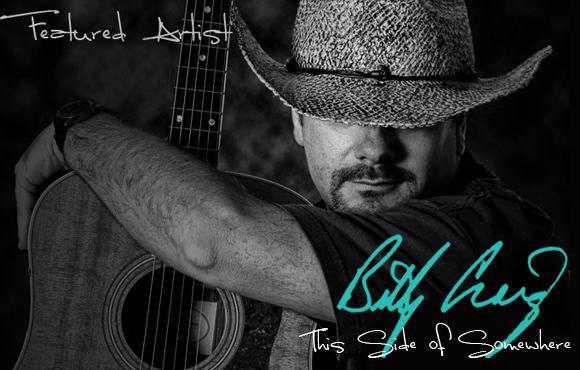 Smoke is still rising off the stage at Memphis Smoke in Royal Oak, MI as Country Music Artist Billy Craig unveiled yet another stellar performance with his smokin' hot band to a highly responsive crowd! Providing an incredible backdrop of musical landscapes was drummer Jason Zook, bassist Mike Marzolo and guitarist Bob Monteleone. Together with Billy they delivered a punch and finesse that echoes true concert greatness comparable to other charismatic performers like Garth Brooks and Bruce Springsteen to name a few. This sizzling performance mesmerized and entertained and served an indicator of great things to come for this poignant quartet. “This will be the lineup of players for the spring and summer concert season and beyond to support the worldwide record sales and airplay in USA, Europe, Australia and South America” says Brad Johnson, All Things Media. “We’ve worked hard to find the finest select players right out of the Detroit Michigan area” Billy’s current CD, THIS SIDE OF SOMEWHERE is gaining notoriety worldwide with songs Millionaire, Flip Flops and the song about a dog that Johnny Cash had as a boy, Jake Terry. Available on itunes, Amazon, Rhapsody, and Napster www.billycraigmusic.comAll Things Media creates and produces music contest to be distributed worldwide.All Things Media 5392 West Ridge Chesterfield, Mi 48051 586-321-2286

12-18-2018 | Arts & Culture
Psychic
Interview with Psychic Billy Caputo
Billy Caputo is an amazing psychic based in New Jersey and New York who does Incredible readings, But don’t worry, as he does readings over the phone. He is very gifted with clairvoyance, telepathy and channelling – which is how he can is able to do such accurate readings by phone. He is also the author of seven books. His Readings stem from that on love and future career moves to
02-23-2018 | Business, Economy, Finances, B …
business news
Global Leaf Blowers Market 2018 - Billy, DeWALT, Dolmar, Husqvarna, Makita
The statistical surveying information incorporated into the Leaf Blowers report is the aftereffect of significant essential and optional research exercises. The report fragments the worldwide market for Leaf Blowers based on makers, item compose, applications, and Region. In this report, each fragment is contemplated completely and measurements are introduced in detail. The report offers an exact outline of the worldwide Leaf Blowers advertise covering key factors, for example, drivers and
10-27-2017 | Leisure, Entertainment, Miscel …
Music Promotion Club
Enjoy Billy Quach’s Soothing EDM Track “Prixm” In Soundcloud
Electronic dance music producer Billy Quach has launched his new music “Prixm” in soundcloud. This artist has introduced an amazing lyrical prowess through his music. The new composition of this rockstar will attract numerous fans. Billy Quach has introduced stirring effect through the music. This young and passionate singer is a well-known public figure who is famous as a producer. Also, he will entertain the audience with his amazing beats.
05-24-2011 | Leisure, Entertainment, Miscel …
Simply Theatre Tickets
Simply Theatre Tickets Presents Billy Elliot
WHAT OTHERS SAY: “Billy Boy - this is the greatest musical yet” Daily Telegraph. “Brit Musical of the decade has arrived” Daily Express. “Billy's a whizz! He'll lift your spirits, make you cry and send you home high with hope” Daily Mail. WHAT IS GOING ON: A funny, heart-warming and feel-good celebration of one young boy's dream in a gripping tale of triumph over adversity. This original story captured the hearts and
03-21-2011 | Media & Telecommunications
All Things Media
Country Music Artist Billy Craig Goes Nationwide
Slow and steadily, Country Music Artist Billy Craig is chipping away at the hearts of America and overseas. Not just with his new incredible CD NEXT EXIT PARADISE but also with topical tunes Peace River and Kiss Your Cash Goodbye. For Billy there are two things that are foremost in his heart when talking about his music. . . great songs and great performances. He has gotten a lot of interest
05-06-2009 | Leisure, Entertainment, Miscel …
All Things Media
Country Music Artist Billy Craig Set for Summer Concert Season
Jumping back and forth between band rehearsals and working in the studio, Billy Craig is not only gearing up for one of country music’s biggest event at the WYCD Downtown Hoedown in Detroit, but he’s also finishing up 17 brand new songs for his new CD Release due out this summer/fall. “Billy has put together a smoking hot band and they really have a great show put together for this summer’s
Comments about openPR
We publish our press releases on openPR.de because we like people who are "open" - just like us.
Frank Obels, CEO, INCONET - Informationssysteme, Communication und Netzwerkberatung GmbH