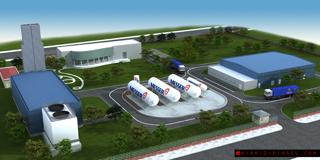 Messer, the largest privately managed industrial gas specialist, is investing over Euro 20 million in a production facility for industrial gases in Turkey.

Messer, the industrial gas specialist, is investing over Euro 20 million in the development of the Turkish gas marketFrankfurt-based Messer, the largest privately managed industrial gas specialist, is investing over Euro 20 million in a production facility for industrial gases in Turkey. Apart from an air separation plant for the production of nitrogen, oxygen and argon which will go into operation in mid 2009, a and a new administration building are planned. The air separation plant is state-of-the-art in terms of energy efficiency and is being built at the heart of the Turkish industrial conurbation which is located approximately 90 km to the west of the metropolis of Istanbul. In Turkey, Messer's main customers are shipyards, car manufacturers and hospitals. The air separation plant will also produce ultrapure medical oxygen for patients with respiratory diseases. Messer Aligaz Sanayi Gazlari was founded in 1974 and now employs around 70 people at two sites in Istanbul and at sites in Manisa and Bursa. Since 2003, the annual requirement for industrial gases has doubled from 7,000 tonnes to over 14,000 tonnes. Today in Istanbul, acetylenes for welding and thermal cutting as well as medical laughing gas are produced while gases and welding gas mixtures are bottled. With its distribution centre in Bursa, Messer Aligaz has operations right in the heart of the Turkish automotive industry. Through its investment, Messer would like to share in Turkey's economic growth.Unchanged: Messer invests Euro 280 million The Messer group is making a huge investment in the development of the independent product supply of industrial gases which are used in all sectors, mostly for process improvement. Because of the different areas of application, the sale of industrial gases is seen to be a business that is independent of economic cycles. Messer is therefore sticking to its objectives: From 2007 to 2010, a total capital expenditure of approximately Euro 280 million is planned for industrial gas production plants in Europe. In September, the first of the new air separation facilities went online in Tarragona, Spain. In October, an air separation unit on the site of the ArcelorMittal steelworks in Zenica, Bosnia Herzegovina, commenced production of oxygen and argon. In addition to the facility in Turkey, a further seven air separation units are under construction in Europe.Messer is one of the leading industrial gas companies, and is active in over 30 countries in Europe and Asia, as well as Peru, with over 60 operating companies. Its international activities are managed from Frankfurt am Main, whilst management of core technical functions – logistics, engineering, production and applications engineering – is undertaken from Krefeld. In 2007, about 4,400 employees generated consolidated sales of €705 million. From acetylene to xenon, the Messer Group has one of the most diverse product portfolios on the market – it produces industrial gases such as oxygen, nitrogen, argon, carbon dioxide, hydrogen, helium, shielding gases for welding, specialty gases, medical gases and many different gas mixtures. The Messer Group has state-of-the-art research and competence centers in which it develops applied technologies for the use of gases in almost every sector of industry, in food technology and environmental technology, medicine as well as research and science.Messer Group GmbH Vice President Corporate Communications Diana Buss Gahlingspfad 31 47803 KrefeldPhone: +49 (0) 2151 7811-251 Fax: +49 (0) 2151 7811-598 Email: diana.buss@messergroup.com www.messergroup.com

09-18-2018 | Health & Medicine
Euroscicon Ltd.
Euro Ophthalmology 2019
The 2nd European Congress on Ophthalmology going to be held amid March 21-22, 2018 at Amsterdam, The Netherlands, which unites a one of a kind and worldwide blend of substantial and medium pharmaceutical, biotech and symptomatic or diagnostic organizations, leading universities and clinical research companies making the meeting an ideal stage to share understanding, encourage coordinated efforts crosswise over industry and the scholarly community, and assess rising advancements over the
03-19-2018 | Health & Medicine
Conference Series LLC LTD
Euro Surgical Pathology 2018
Rome, Italy welcomes you all to share Medical Knowledge and Experience at our upcoming "14th International Conference on Surgical Pathology and Cancer Diagnosis, May 17-18, 2018. Some of the main sessions "to-be-covered" are • Surgical Pathology and Diagnosis • Cancer Pathology • Breast Pathology • Gynecologic Pathology • Gastrointestinal and Liver Pathology • Neuro Surgery and Pathology • Oral and Maxillofacial Pathology • Dermatopathology • Genitourinary Pathology • Cytopathology & many more! Holiday Inn Rome - Aurelia Via Aurelia Km 8,400 00163 Roma Italy
01-13-2017 | Health & Medicine
ConferenceseriesLLC
20th Euro Congress on Psychiatrists and Psychologists
Theme: Achieving mental wellness by understanding human mind through Psychiatric approaches Description: Euro Psychiatrists 2017 (CME Accredited Event) will provide an opportunity for all stakeholders working on mental health issues to talk about their work. Euro Psychiatrists 2017 will congregate renowned speakers, principal investigators, experts, psychiatrist and researchers from both academia and health care industry will join together to discuss their views and research. Conference highlights 1. Psychiatry 2. Psychology 3. Child and Adolescent Psychology 4. Psychosis And Adverse
01-02-2017 | Health & Medicine
Euro Biotechnology
17th Euro Biotechnology Congress
Conference Series LLC extends its warm welcome to 17th Euro Biotechnology Congress during September 25-27, 2017 at Berlin, Germany with a theme “Novel Trends and Innovations in Biotechnology for Making Life Better”. Conference Series LLC through its Open Access Initiative is committed to make genuine and reliable contributions to the scientific community. Scope and Importance Euro Biotechnology Conference aims to bring together the Professors, Researchers, scientists, business giants, and technocrats to provide
06-30-2016 | Industry, Real Estate & Constr …
Euro Facade Tech
Euro Façade Tech Glazing Systems
Virtually any type of glazing system can be used with structural glass facades. Check out the options with Euro Façade Tech. FRAMED Framed systems support the glass continuously along two or four sides. There are many variations of framed systems, most of which fall into two general categories. Conventional unitized curtainwall systems are seldom used with structural glass facades. STICK Stick-built glass facades are a method of curtainwall construction where much of the fabrication
05-18-2016 | Tourism, Cars, Traffic
Traveltext Ltd
Traveltext's alternative Euro 2016
You don’t even have to be a sports fan to know that this summer, the England football team will be heading off to the latest major international tournament with the hopes of a nation resting on the shoulders of the likes of Wayne Rooney, Jamie Vardy and Dele Alli. The fact that the tournament has expanded this year to include no fewer than 24 nations means that the eyes of Europe
Comments about openPR
Your portal is fast, simple, and easy to use. Others may have more functions but they also demand more editing time, you have to preformat the text in order to achieve a good result etc. I think openPR is really fantastic!
Andreas Knepper, wallmedien AG