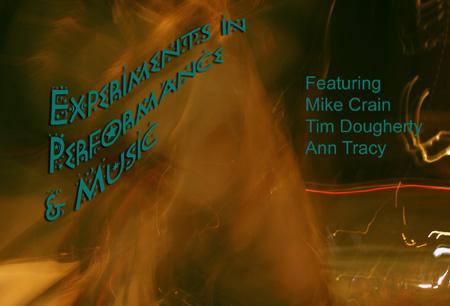 Card for the performance designed by Ann Tracy

On Friday November 21st, at 7 pm, a mixed media experimental event will be performed at Asylum Gallery, 1719 25th St., (behind the gray fence at 25th & R Sts.) Sacramento CA 95816. The performance featuring improvisational digital music by Mike Crain and an improvisational performance by Ann Tracy and Tim Dougherty was planned by Tracy, the coordinator of the Digital Art and Photography exhibit at the gallery, as a vital part of the exhibition. Doors to the gallery will open at 6:45 pm that evening and admission is on a sliding scale according to income. The evening will feature a semi-improvisational performance piece using text created by Tracy, performed by her and Dougherty and with improvisational music by Crain. Crain will also present more improvisational music that night. This performance is considered Fluxus in that there will be random repetition of both text and movement, which are based on pedestrian, everyday movements not dance movements. Crain is an award-winning composer, percussionist and college professor in Sacramento. His compositions have been performed in New York, at the Festival of New American Music in Sacramento, and the “Day of Percussion” at California State University Sacramento and Southern Oregon University, Ashland. Recently, a composition for chamber ensemble trio, Riptide, was performed by SyZyGy as part of the New Music Concert Series in Ashland. He has performed in New York, Oregon, Southern California, and in the greater Bay Area at the Otherminds Festival (VI and VII), the Festival of New American Music, the Viola Festival, the John Cage MusiCircus at Fort Mason San Francisco, the Mondavi Performing Arts Center, the San Francisco Asian Art Museum, and Carnegie Hall. Tim Dougherty is an actor, model, dance instructor and general bon vivant who lives in the Sierra Foothills. He has appeared with Beyond the Proscenium Productions, Foothill Theatre Company, Theatre El Dorado and many other theatre companies in Northern California. Among his performance credits is Dancing with Desire at the Edinburgh Fringe Festival in Scotland. He has a great interest in photography, avant-garde art and travel. Ann Tracy is an actor, playwright, director, writer and artist. As the founding artistic director of Beyond the Proscenium Productions in 1994, she has directed many original works and regional premieres. She has written 9 scripts, 7 of which have been produced in California. She is a member of the Society of Stage Directors and Choreographers, alumnae of the Directors Lab West and a member of the Dramatists Guild. In addition to theatre work in Northern California, her film credits include George B (Sundance Film Festival), Anna’s Cross (post-production) and Capital Women (PCS Festival October 2007). She is shooting the independent short feature Bitter/Sweet in December. The work from the ten artists from New York to California accepted into the National Juried Digital Art & Photography Exhibit will be on display until December 21st. Normal gallery hours are 1 to 5 pm on Saturdays and Sundays. A Second Saturday reception is planned for December 13th from 6 to 9 pm. The artists in this exhibit are Curtis Bond, Robyn Desposito, Jack Hastings, Jodie Hooker, Jim Klein, Develyn Marshall, Josh McGrath, Terry Oliver, Chris Schiller & Michael Smith. While the majority of artists are from the Sacramento region, there will be work from Redding, CA; Austin, Texas and Sunnyside, New York. Asylum Gallery is an artist-run gallery in midtown Sacramento, CA, USA. Ann Tracy is a freelance PR person who ends up writing their news release for nada. Event Release for Immediate Release Contact: Ann Tracy – anntracy51@gmail.com or 916-804-6095 Asylum Gallery, 1719 25th St, Sacramento CA 95816

02-23-2021 | Arts & Culture
BookBuzz.net
Author Tracy Sumner Releases New Regency Romance - The Duke is Wicked
Author Tracy Sumner Releases New Regency Romance - The Duke is Wicked Author Tracy Sumner is pleased to announce the release of her new regency romance, The Duke is Wicked. This is book three in her League of Lords series. A wicked duke. A troublesome American. And the forbidden desire they can't deny... Worlds and leagues apart, two unlikely lovers ignite in passion... Praise for Tracy’s Writing: “A superpowered twist on Victorian romance!” —Publishers
03-23-2020 | Arts & Culture
BookBuzz.net
Author Tracy Summer Promotes Her Garrett Brothers Historical Romance Series
Author Tracy Summer Promotes Her Garrett Brothers Historical Romance Series Author Tracy Summer is pleased to announce the promotion of her historical romance series, The Garrett Brothers. Book three, Tides of Desire was released in November 2019. All three books have received rave reviews from readers and reviewers and are best sellers in the historical romance category. Tides of Love Garrett Brothers, Book 1 By Tracy Summer ISBN: 978-1719891110 ASIN: B0066B1XTY Pages: 260 Tides of Passion Garrett
12-03-2018 | Arts & Culture
Adelaide Books
New book by Tracy Ross: Certainty of One
ADELAIDE BOOKS is proud to offer the latest work by Tracy Ross Certainty of One hitting stores everywhere on November 7th, 2018. Certainty of One is the story of a psychiatrist, a patient, a journey of five friends who, upon venturing to the abyss of the loneliness in their lives, find the unity they share amid the chaos of wastebasket diagnosis, prescription pharmaceuticals and the wondrous paradox of the School
06-01-2017 | Business, Economy, Finances, B …
Fior Markets Research Reports
Global Duvets Sales Market 2017 - Nostalgia, Tracy Porter, Vera Wang, Veratex, W …
The Report describe Duvets Sales Introduction, product scope, market overview, opportunities, risk, driving force also to analyze the top manufacturers, with sales, revenue, and price, market type and application, with sales market share and growth rate by type, application, from 2017 to 2022 The study Global Duvets Sales Industry 2017 is a detailed report scrutinizing statistical data related to the Global Duvets Sales industry. Historical data available in the report elaborates
09-04-2009 | Arts & Culture
World Heritage
Tracy Chevalier launches her new Best Seller at The Dinosaur Museum in Dorcheste …
Visitors to Dorchester’s award winning Dinosaur Museum were thrilled to meet bestselling novelist Tracy Chevalier when she launched her new book Remarkable Creatures at the Museum on Tuesday 25th August. Tracy, whose bestselling novel Girl with a Pearl Earring became an equally popular film spends a lot of her time in Dorset. Inspiration for her books often comes quite unexpectedly, in the case of the Girl with a Pearl Earring it
02-05-2009 | Sports
Swash Putting Schools
Yes! Golf's Tracy III Plus putter "Hot Listed" in Golf Digest
Harold Swash, known as the European putting doctor, introduced the innovative theory of concentric grooves in 1995. Today, C-Groove putters are taking the worlds biggest manufacturers on. Golf Digest named the soon-to-be-released Yes! C-Groove Tracy III Plus to its "2009 Hot List." The Tracy Plus III is the first putter that offers four interchangeable hosel options. YES! putters featuring C-Groove technology have been on the Golf Digest "Hot List" for five
Comments about openPR
9 o'clock: discuss press release with client, 10 o'clock: submit release to openPR, within the briefest possible time release is published and displayed in a prominent place on openPR.de. I am thrilled!
Zehra Spindler, Calypso Now! - Communication Agency