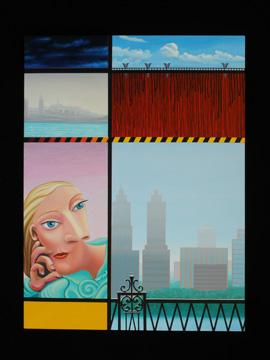 When Worlds Collide by Dan Samborski

Since he was the kid who got in trouble in school for drawing and not paying attention, it’s almost too ironic that Carmichael resident Dan Samborski now teaches art at American River College. With his last solo show back in 2002, he is now ready to show new work from September 6 to October 6 at Asylum Gallery inside HQ: Headquarters for the Arts, 1719 25th St., Sacramento (behind the gray fence at 25th & R Sts.). A Second Saturday reception is planned from 6 to 9 pm on September 13th. Regular gallery hours (except for 2nd Saturday) will be 1 to 5 pm on Saturdays and Sundays or by appointment. Samborski is a painter who begins his process by making collages, instead of drawing. Once he makes something that he doesn’t quite understand, then he will paint it. He says he picks images like a poet chooses words. “I’d call my work post modern painting in that it is an eclectic mix of styles,” said Samborski. “I think my work reflects many different influences such as Renaissance art which was a mix of ancient Greek and Roman influences viewed thru Christian ideology. I was inspired early on by neo-classicism, which is also an eclectic style, as well as surrealism, photorealism and abstract art which is the foundation for the composition. He went on to say that he uses visual languages that the culture already understands, so people don’t feel alienated by the work. Within that visual language you’ll find irony, parody and sly jokes in his paintings. Samborski says he think that humor can help people can understand ideas better. Samborski says one of the unifying elements in about half of the new paintings are based on Mondrian paintings. He went on to say that he’s been interested in truth his whole life. Art, philosophy, religion and science are all doing the same thing in his mind, trying to answer the “Big” questions: Who am I? Where am I? What does our existence mean in a bigger scheme of things? He has been teaching art at American River College since 1991. Prior to getting his MA in painting from CSUS, he lived in Madison, Wisconsin where he received his BS in art education. It took a stint in the commercial art world as a designer and illustrator to send him to graduate school so that he could teach.Contact: info@asylumgallery.net Cherie Hacker @ 916-704-2909 or Ann Tracy @ 916-804-6095 Asylum Gallery, 1719 25th St., Sacramento CA 95816Asylum Gallery is a contemporary gallery of artists whose work spans a unique circumference. You will find vibrant artwork that ranges from classic black & white to abstract photography, mixed media painting and traditional printmaking to work in the digital realm. In addition to the exhibits, there are always prints by member artists, cards, and hand-made jewelry on sale for very reasonable prices. Ann Tracy founded Asylum Gallery in March of 2005, as one of the original groups which formed HQ: Headquarters for the Arts located at 25th & R Sts., in midtown Sacramento, California. She was joined by original members Cherie Hacker & Terri Ramirez and other member artists now include Linda Katzdorn, William Obernesser and Marguerite Schaffron. While being an artist-run gallery, Asylum also offers exhibition space to other artists in the community with its bi-annual International Mail Art shows (in which a portion of proceeds go to different charitable groups) and the Juried Shows in November and December.

11-11-2008 | Arts & Culture
Asylum Gallery
Fluxus-Oriented Experimental Performance Debuts During Digital Art Show at Asylu …
On Friday November 21st, at 7 pm, a mixed media experimental event will be performed at Asylum Gallery, 1719 25th St., (behind the gray fence at 25th & R Sts.) Sacramento CA 95816. The performance featuring improvisational digital music by Mike Crain and an improvisational performance by Ann Tracy and Tim Dougherty was planned by Tracy, the coordinator of the Digital Art and Photography exhibit at the gallery,
11-05-2008 | Arts & Culture
Asylum Gallery
National Juried Digital Art and Photography Show Opens November 15th
Work from ten artists from New York to California has been accepted into the National Juried Digital Art & Photography Exhibit at Asylum Gallery, 1719 25th St., Sacramento CA 95816. Jurors for this show were Kent Lacin, a well known commercial and fine art photographer and Marcelle Wiggins, a digital and mixed media artist and professor at CSUS and Cosumnes River College. The exhibit opens with an
08-04-2008 | Arts & Culture
Asylum Gallery
Outlook at Asylum Gallery Continues to August 17th
Trips to Spirit Rock Meditation Center in Marin County and Northern Mexico are the impetus for Marguerite Schaffron’s new photography and painting in an exhibit called "Outlook" at Asylum Gallery inside HQ: Headquarters for the Arts, 1719 25th St., Sacramento (behind the gray fence at 25th & R Sts.) until August 17th. There is one more Saturday evening reception from 6 to 9 pm for this show on August
04-01-2008 | Arts & Culture
Asylum Gallery
Winners of 2007 Print Show Exhibit New Work at Asylum Gallery in Sacramento
Asylum Gallery, located inside HQ, 1713 25th St. (25th & R Sts) in Midtown Sacramento presents the three best artists from the National Juried Print Show from April 19th to May 18th. The show features both contemporary print making and traditional painting. There is a Second Saturday reception scheduled for May 10th from 6 to 9 pm. Gallery hours are Saturdays and Sundays from noon to 4