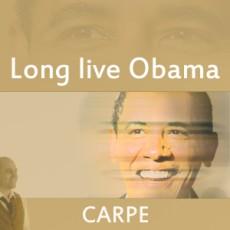 The Cologne singer Carpe’s devotion to the American presidential candidate Barack Obama is most probably unique. Excited by the African-American, Democratic campaigner’s charisma and plans for reform, Carpe went into a studio and created his own hymn to the contender: “Long Live Obama!“ The song is dedicated to Barack Obama’s achievements thus far, that he may win the election on November 4 and fulfill his plans for positive change. Not just for America, but also for this world. The song is available for download, free of charge, under www.carpe-music.de, and the video to the song is on YouTube (Carpe Obama). The cmp corporate media publishing ltd. is operating as a publisher house and agency is publishing the magazines GründerMagazin, Franchising.mag and sphere. cmp is running the webportals gruendermagazin.com, franchising-network.de, sphere-magazin.de and medical-products.org. Besides that cmp is actively involved in entrepreneural consulting, pr-business and marketing development. gruendermagazin.com is partner of openPR. cmp corporate media publishing ltd. Lindenstraße 20 50674 Köln Telefon +49 221/46752504 Telefax +49 221/46752505 email: mail@cmp-deutschland.de

02-24-2017 | Arts & Culture
IMAGE UNLIMITED COMMUNICATIONS
The Legacy of Barack Obama
No matter the political party, Barack Obama’s two-term presidency is one made up of milestone accomplishments and controversies. On Wednesday, March 8th 2017 from 6:00PM – 8:00PM Boston Center for Adult Education (BCAE), Boston’s award-winning adult education center, is dedicating an entire evening to the 44th President with Barack Obama’s Legacy: A Public Conversation. Massachusetts State Senator, Sonia Chang-Diaz, Civil Rights Commissioner, Charlotte Golar Richie, and Lawyer, Architect, and Social
03-20-2012 | IT, New Media & Software
CyberWatch
CYBERWATCH PROGRAM RECOGNIZED BY PRESIDENT OBAMA AND SENATOR MIKULSKI
National Cybersecurity Education Program Earns Plaudits for Preparing College Students to Meet Critical Workforce Needs Washington D.C., March 15, 2012 – CyberWatch, a cybersecurity education consortium funded by the National Science Foundation (NSF), was touted in separate speeches by President Barack Obama and Senator Barbara A. Mikulski (D-MD) recently for its vital work preparing community college students to enter the cybersecurity workforce. Before a speech on Feb. 13 at Northern Virginia Community
03-16-2011 | Politics, Law & Society
SGS Consumer Testing Services
Obama Signs Healthy Hunger-Free Kids Act
The Healthy Hunger-Free Kids Act was signed into law in the United States by President Obama in December 2010. Designed to improve nutrition in school and reduce rates of childhood obesity, the law increases access to food for the children of low income families in a country where 30 million children receive food through the school lunch program, 17 million children live in food insecure households and one in three
12-15-2010 | Politics, Law & Society
Meet Gay Professionals.com
Obama Ignores Gays and Lesbians In Tax Debate
On average, gays and lesbians earn more than the majority of Americans. They enjoy more disposable income as a result of higher wages and fewer expenses. However, gay and lesbian professionals suffer from discriminatory tax policies that have been in place for decades, and during the current tax debate these issues have once again been ignored. President Obama and Senate Republicans have reached a deal on the extension of tax breaks
09-18-2008 | Politics, Law & Society
Game Group
Obama vs. McCain - the ring-fight
Play.de presents the presidential boxing-game. According to polls the presidential race between Barack Obama and John McCain is nearly even. Who will win the fight and be the next president of the USA? In a free online-game at Play.de users have the chance to find out themselves. They can hop into the ring, choose their side and knock the opponent out. The decision of the race for the White House is
08-29-2008 | Politics, Law & Society
ethority GmbH & Co. KG
Bad Grades for Barack Obama
ethority analyzed around 90,000 authentic user opinions found in forums, blogs and news sites concerning the two candidates running for president of the USA. German-, English- and Spanish-speaking contributions on the internet were evaluated and show that the democratic candidate Barack Obama has a greater buzz (percentage) compared to his republican competitor John McCain. However, in terms of sentiment, especially among German- and Spanish-speaking internet users, McCain and Obama are
Comments about openPR
OpenPR is clearly structured and remains true to its principle of confining itself to the essential parts. OpenPR has proven to be a very good and reliable partner to our media agency: Within the shortest time the releases are online and go down well with the media representatives. The success of OpenPR is reflected in the steadily increasing number of press releases. It is good that OpenPR exists!
Ursula Koslik, Director Marketing & PR, F+W Hamburg