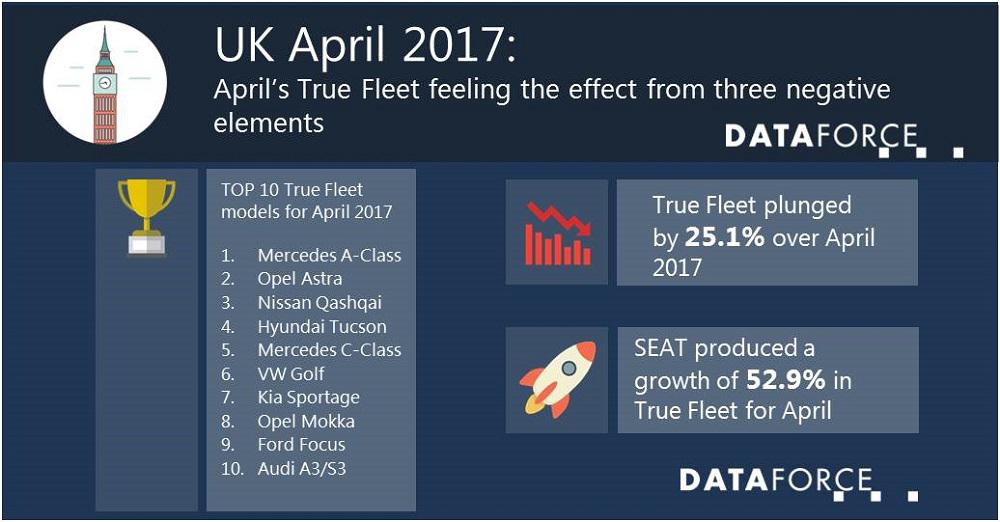 With April bringing a triple combination of negative elements to effect the market it was perhaps a foreseeable downturn for the both the Total Market and True Fleet. Three less business days, the usual hangover from the UK plate change plus the somewhat confusing new Vehicle Excise Duty (VED) all contributed to the less than stellar - 19.8% for the Total market. While True Fleet suffered with a - 25.1% it can possibly take some relief from the fact that last year’s April was its highest on record since Dataforce records began in 2004. The Private Market took the hardest hit with a - 28.5% and somewhat predictably the Special Channels had the highest April month on record with Dealership and Manufacturer’s contributing the most (setting their own record for April). Within the manufacturers’ Top 20 it was not doom and gloom, especially for three brands that were able to produce positive growth from what was obviously a challenging month. Mercedes moved itself two places into 3rd after producing a + 5.1%, no doubt helped by the new E Class more than doubling it numbers from last April. The Mercedes A-Class also took 1st place in True Fleet model ranking and while this was good news there was more to come, Mercedes is also showing the highest year-to-date volume growth for UK True Fleet market.Hyundai also performed well beyond last year’s April, pushing its growth rate to a + 41.0%, taking it inside the Top 10 (7th place) for the 2nd month in a row. Three individual models had triple-digit volume growth for the month, The Tucson, Ioniq and the i10. Touching on the Ioniq briefly we see that not only has it managed to outregister the iX20, i40, H1 and the Santa Fe year-to-date but is also currently 9th in the alternative fuels model ranking. The final manufacturer to produce positive growth was SEAT which posted a rise of 52.9% for April, the highest growth inside the Top 20 securing it 12th place. The upturn was powered mainly by the Ateca that secured 24.0% of SEAT’s volume, but the Leon and Alhambra are not to be overlooked, as they also managed three-digit volume gains. SEAT’s 2017 market share in True Fleet is also in need of mention, prior YTD share of True Fleet stood at 1.19%. This year they have more than doubled their share and currently stand at 2.45%, a pretty remarkable feat considering they have one of the UK’s smallest model line-ups. So with the possible end-of-year-release of the Arona (Small SUV) helping expand the line-up, the brand’s fleet numbers should continue to swell. (437 words, 2,534 characters)DATAFORCE – Focus on Fleets Dataforce is the leading provider of fleet market data and automotive intelligence solutions in Europe. In addition, the company also provides detailed information on sales opportunities for the automotive industry, together with a wide portfolio of information based on primary market research and consulting services. The company is based in Frankfurt, Germany.Mario Zagar Dataforce Verlagsgesellschaft für Business Informationen mbH Hamburger Allee 14 60486 Frankfurt am Main GermanyPhone: +49 69 95930-229 Fax: +49 69 95930-333 Email: mario.zagar@dataforce.de www.dataforce.de

04-23-2019 | Business, Economy, Finances, B …
REPORTSANDMARKETS
FinTrack: April 2019
FinTrack: April 2019 FinTrack showcases the latest innovations from financial services providers around the world. Each innovation is assessed and rated on key criteria, providing you with valuable insight. The provision of financial services is constantly evolving, with new technology having a particularly significant impact. Innovations such as digital delivery, AI, biometrics, and robo-advice are enabling providers around the world to offer new and improved services to customers that will improve the
03-07-2016 | Arts & Culture
Johansson Projects
Blaise Rosenthal | Mirage | April 1
Mirage Featuring: Blaise Rosenthal Show Runs March 26 - May 21, 2016 Reception: Friday, April 1, 5-8pm In first solo exhibition Blaise Rosenthal's acrylic and charcoal works reveal subtle forms with layers of intricate construction. A straight crisp line, a clear division of light and dark, cuts across a rich surface formed by two asymmetrically scaled canvases. This singularity, however, does not exist. It is a greater sum of parts. Washes of acrylic media
04-10-2012 | Leisure, Entertainment, Miscel …
IMAGE UNLIMITED COMMUNICATIONS
April in Paris
WHAT: There’s nothing like April in Paris. The city is awash with the color of cherry blossoms and daffodils, and while there is a slight chill, love is in the air. On Saturday, April 21st, 2012 from 12:00PM to 5:00PM, The Wine ConneXtion, located in North Andover, MA will transport guests to the city of lights with “April
04-26-2011 | Health & Medicine
Overcome
April 25, 2011
The world leading AIDS experts will gather for the 2012 ISHEID conference in Marseille, France, May 23-25, 2012. The general AIDS conference theme will be ‘From Universal HIV Testing to HIV Cure’. Neuilly-sur-Seine, France, April 25, 2011 -- The ISHEID, for ‘International Symposium on HIV & Emerging Infectious Diseases’, is the biennial world leading conference in the fields of HIV & Emerging Infectious Diseases. Organized by an independent group of recognized
03-04-2011 | Arts & Culture
Prana Marketing
FAME - The Musical Auditions are April 10th and April 30th
Who: bergenPAC, the renowned, state-of-the-art performing arts center located in the heart of downtown Englewood is expanding its prestigious beyondEDUCATION program to include three new premier classes throughout the year and the summer. Joining the highly successful beyondDANCE, the beyondSTAGE, beyondRECORDING and beyondTHEATRE classes hit the stage to round out the arts education program, which offers top quality programming to families and children to stimulate learning and spark creativity and imagination.
04-16-2007 | Logistics & Transport
Analytiqa
Analytiqa: Logistics Bulletin: Friday 13th April
This week\'s Logistics Bulletin reports on further M&A activity from around the world, across the logistics, forwarding and express sectors. JF Hillebrand Group has acquired Trans Ocean Distribution Limited, a leading provider of transportation solutions to the bulk liquid shipping industry, Kerry Logistics is expanding in Eastern Europe and Parcelnet, the UK courier delivery network and provider of home shopping fulfilment services, is acquiring the Redcats UK courier network operation
Comments about openPR
We publish our press releases on openPR.de because we like people who are "open" - just like us.
Frank Obels, CEO, INCONET - Informationssysteme, Communication und Netzwerkberatung GmbH