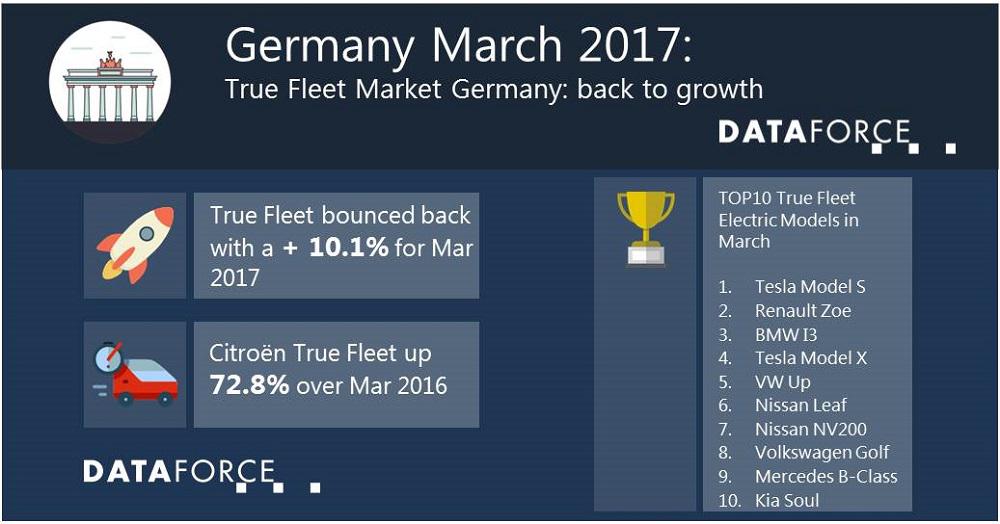 After a slightly disappointing result in February (- 6.7%) the German True Fleet Market performed very well in March. The double-digit growth of 10.1% pushed the overall rate for the first quarter of 2017 to + 4.4% while the Total Market grew by 6.7% in Q1.The Top 10 ranking by brands didn’t show many changes. Despite some impressive growth rates (Opel + 56.8%, Renault + 80.9%) the positions 1-9 remained unchanged. Toyota was able to enter the Top 10 by overtaking Nissan and with an increase of 57.0% the Japanese manufacturer achieved its highest market share in nine years (March 2008). This was partly due to the all-new C-HR but registrations of Auris and Aygo climbed strongly as well.Outside the Top 10 Citroen was shining too with + 72.8% and jumping from rank number 21 into 14th position. The Citroen Berlingo was especially outstanding, growing by 237% and representing almost half of all Citroen fleet registrations in March. A remarkable achievement taking into account that the second generation (B9) was introduced 9 years ago with only minor upgrades in 2012 and 2015.A bit further down the ranking we can report all-time records for two brands: both Jaguar and Tesla scored their best absolute volumes and market shares in the German True Fleet Market. At Jaguar the SUV F-Pace was the strongest seller both in March and for the first quarter of 2017. The F-Type in second place is (still) performing exceptionally well with + 367% in March and jumping into second position behind Porsche’s 911 within the True Fleet Sportscar segment.Despite a still very small model range Tesla is (electrically) accelerating. The Model X currently represents around one third of Tesla’s fleet registrations in March. This is marginally higher than in the Private Market. The results of Model S are absolutely remarkable. With more than 200 fleet registrations the sedan from Palo Alto ranked number two in the German Luxury Car segment behind BMW’s 7 Series and outpacing competitors like Porsche Panamera, Mercedes S Class, Audi A8 etc. Within the Private market the Model S was even No. 1 for February and March.DATAFORCE – Focus on FleetsDataforce is the leading provider of fleet market data and automotive intelligence solutions in Europe. In addition, the company also provides detailed information on sales opportunities for the automotive industry, together with a wide portfolio of information based on primary market research and consulting services. The company is based in Frankfurt, Germany.Contact: Michael GergenDataforce Verlagsgesellschaft für Business Informationen mbH Hamburger Allee 14 60486 Frankfurt am Main GermanyPhone: +49 69 95930-231 Fax: +49 69 95930-333 Email: michael.gergen@dataforce.de www.dataforce.de

You can edit or delete your press release True Fleet Market Germany: back to growth here

03-26-2018 | Industry, Real Estate & Constr …
Aspp Info Global
Project Reporter Magazine march - 2018
Project Reporter Magazine march - 2018 Issue Highlights: Projects with contacts is what you get here. This issue contains 189 Projects and tenders from more than 40 sectors and sub-sectors. Other than 90 Projects under various stages, the issue also contains India Opps section, b2b tender, consultancy bids, realty projects, project watch, and industrial project section India Opps section covers projects related to Airport / Aviation, Hospitality, Hydro Power, Metro Rail, Railways, Solar Energy,
03-20-2018 | Science & Education
uCertify
uCertify Feature Updates for March, 2018
Livermore, CA - March 16, 2018 - uCertify has roll out exciting new features for the users to make their learning more interactive. Get ready for a better learning experience with the features such as: Algo Item: A mathematical item to resolve maths equation. It randomly generates variables for each question and options so the user gets a question with new values every time he attempts it. Choose GridView: A table
02-09-2017 | Industry, Real Estate & Constr …
CAS DataLoggers
Get Ready for PittCon 2017 in March
T&D Wireless Technologies Save Labs Cost and Time Getting ready for Pittcon 2017 March 5th-9th in Chicago this year? If so, come visit CAS DataLoggers and T&D at T&D Booth #4836! We’re showing visitors the latest Lab Automation technologies to save lab workers time and cost. Monthly cloud subscriptions have become expensive, but with T&D’s Free WebStorage cloud storage service, you now have 24/7 access to your data at no charge! This
03-03-2016 | Industry, Real Estate & Constr …
Malta SIR
Malta in March
Although the beautiful weather happens year-round in Malta, each month of the year reserves special surprises and events to be experienced differently. March in Malta is a special month to be in the Maltese Islands and immerse yourself in the island’s cultural and historical heritage, mainly associated with its long-standing religious traditions and pre-historic ties – it is the month of rebirth brought along by spring and resurrection as everyone
06-03-2015 | Business, Economy, Finances, B …
ECOVIS AG Steuerberatungsgesellschaft
INDIA: Big March for SME
In keeping with recent and ongoing changes in the business landscape, business is focusing on mobility rather than stability, and the service business has evolved accordingly. Globalization is the buzzword as geographic boundaries cease to exist. Business is competing for opportunities in an international arena. Because the world is connected in a single unit, any crisis in one part of the world has repercussions in other parts, too. Small and medium-sized
12-22-2009 | Arts & Culture
Pressure group en.luegerplatz.com
OPEN CALL (till 1st March 2010)
Open call for submissions to re-design the site of the Lueger Statue transforming it into a monument against anti-Semitism and Racism in Austria en. luegerplatz.com Subject matter and aims Elections both in and outside Austria have shown just how much anti-Semitism continues to be politically instrumentalised by parties and social groups. Anti-Semitism is usually a part of a more extensive racist rhetoric that attempts to make cheap populist points. The statue to former
Comments about openPR
OpenPR ist the nicest and most clearly laid out PR platform I have seen to this day. The press releases are displayed very nicely and clearly and without any unnecessary frills. The updates are fast and the finished release looks appealing and is clearly legible. Even with 16 years of experience one discovers new things from time to time. Congratulations!
Gabriele Ketterl, Director Marketing & PR, Menads