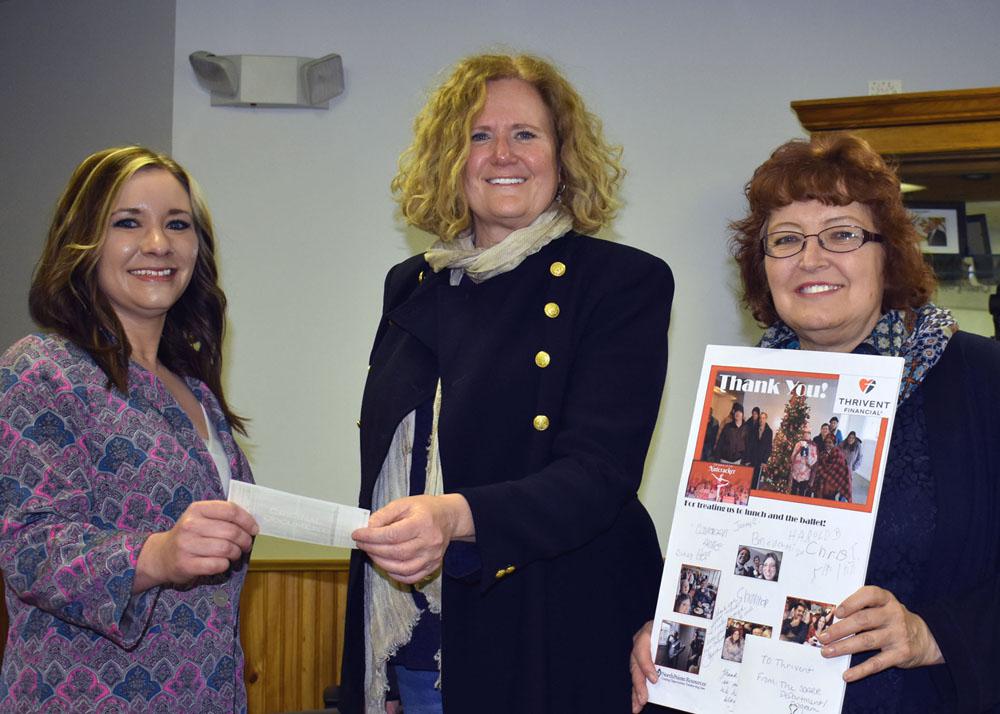 [ZION, IL] The Thrivent Community - North Lake County office of Thrivent Financial - selected NorthPointe Resources as a recipient of a year-end giving project. This project was multi-tiered, including a donation of toiletries, an invitation for program participants to attend a ballet and a monetary donation. Thrivent’s generosity has not only benefited NorthPointe through providing increased resources but has also brought a new experience and increased community involvement.Thrivent of North Lake County, which includes ten local churches and businesses, gathered toiletry supplies including lotion, shampoo, body wash, and toothpaste and placed them in bags for delivery during last Christmas season. In all, 110 bags were prepared and were shortly thereafter distributed to NorthPointe Resources’ SOARR Behavioral Health Services program participants.Additionally, NorthPointe Resources’ program participants were invited to join Thrivent members at a performance of The Magic of the Nutcracker ballet held at Waukegan’s Genesee Theater in early December. Twelve program participants and several employees of NorthPointe enjoyed the performance and lunch at the theater. After the performance, Keith H., NorthPointe program participant, reflected, “I’ve never been to a ballet before! It was fun!” Similarly, The Magic of the Nutcracker was a first-time experience for many from the group – attendees were thoroughly amazed and grateful for the experience. If that was not enough, in December, Thrivent also donated $1,000 to NorthPointe Resources. “Thanks to the generosity of Thrivent, NorthPointe Resources we will be able to resurface the driveways at some of our community homes, a necessity that we have had to put off until now,” said Kristen Hudrick, VP of Residential Services. Thrivent is a financial services provider, dedicated to guiding its members and society to not only be financially responsible but also to live generously. Thrivent considers their organization successful when its members, their families, and our communities thrive in saving, spending, and sharing. Individual members bring hope to adversity while providing support to their communities through volunteering and donating.Established in 1953 as an organization of social good, NorthPointe Resources, Inc.is a premier provider of a full range of award-winning programs for people with disabilities and mental illness. Located in northern Illinois, NorthPointe serves Lake, Cook and McHenry counties, supporting approximately 500 people annually. To learn more please visit www.northpointeresources.org3441 Sheridan Road Zion, Illinois 60099

09-25-2017 | Arts & Culture
NorthPointe Resources
NorthPointe Celebrates Direct Support Professional Recognition Week
[ZION, IL] –From Sept. 10-16, NorthPointe joined in on the national celebration of Direct Support Professional (DSP) Recognition Week, honoring the tens of thousands of workers who enable individuals with intellectual and developmental disabilities to be healthy, safe, valued, and participating members of their communities. “Through their compassionate care, DSPs give life to the programs and services that are available at NorthPointe. It’s important for our employees to understand the
07-19-2017 | Associations & Organizations
NorthPointe Resources
NorthPointe Resources’ Annual Fundraiser - a “Bigger ‘n Better” Success! …
[ZION, IL] NorthPointe Resources held their annual fundraising event “Blues ‘N Brew” on Saturday, June 17 at Viper Alley in Lincolnshire, IL. “This new, larger venue was chosen because last year’s event sold out in 11 days,” stated Dina Donohue-Chase, NorthPointe’s CEO. This year’s theme was “Bigger ‘n Better,” and it was just that. Approximately 250 guests enjoyed live music performed by Lloyd Stephens and the Brothers, scintillating appetizers and
06-23-2017 | Politics, Law & Society
NorthPointe Resources
STATE SENATOR TERRY LINK TOURS NORTHPOINTE RESOURCES
[ZION, IL] Illinois State Senator Terry Link, from Illinois' 30th District, visited NorthPointe Resources on Tuesday, June 13, 2017. While visiting NorthPointe’s headquarters at The Killian Center located in Zion, the senator toured the facility and met with many of NorthPointe’s staff and program participants. Having visited the center previously, Link was interested in seeing changes that have been made in addition to gaining further insights regarding NorthPointe’s concerns and
05-03-2017 | Politics, Law & Society
NorthPointe Resources
State Senator Melinda Bush Tours NorthPointe Resources
Illinois State Senator Melinda Bush, from Illinois' 31st District, visited NorthPointe Resources on Friday, April 21, 2017. The Senator’s visit took place at NorthPointe’s headquarters in The Killian Center located in Zion IL. As part of the visit, a tour of the facility was conducted during which the senator met with many of NorthPointe’s staff and program participants. NorthPointe supports people with intellectual and developmental disabilities (I/DD) and/or mental health