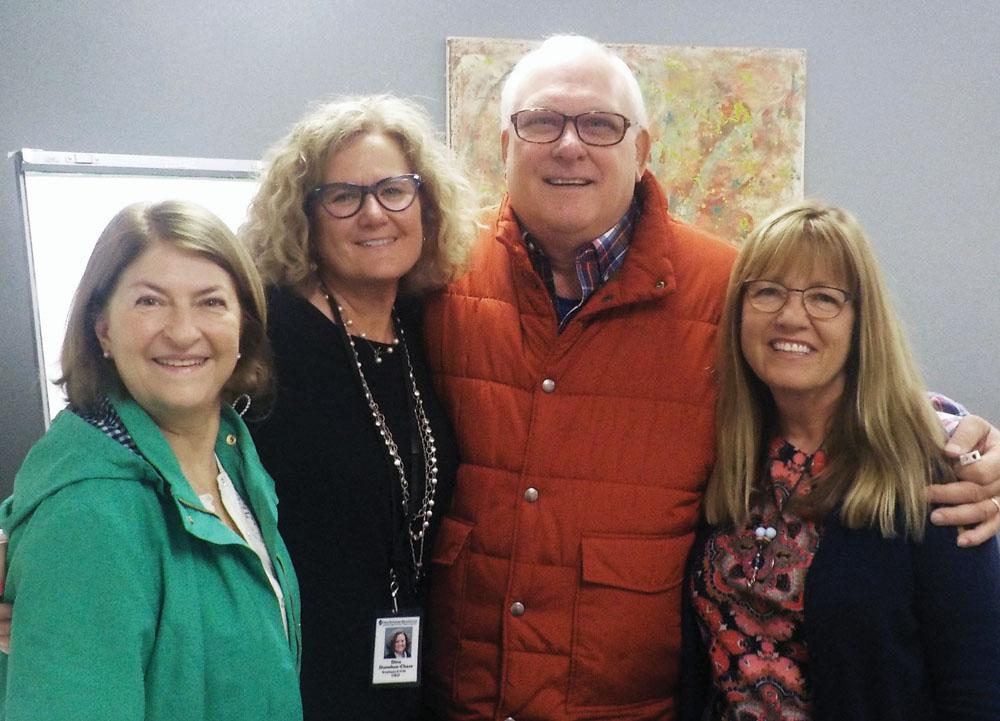 Illinois State Senator Melinda Bush, from Illinois' 31st District, visited NorthPointe Resources on Friday, April 21, 2017. The Senator’s visit took place at NorthPointe’s headquarters in The Killian Center located in Zion IL. As part of the visit, a tour of the facility was conducted during which the senator met with many of NorthPointe’s staff and program participants. NorthPointe supports people with intellectual and developmental disabilities (I/DD) and/or mental health issues. The visit was part of her ongoing effort to get to know her constituents in the 10th district, understand their thoughts and concerns, and make sure their voices are heard when she addresses the senate.To help answer some of the questions surrounding the state’s current budget impasse and its effect on human services, the senator’s tour was followed by an informal roundtable with parents, staff and program participants. Parents spoke about the critical care NorthPointe provides for their loved ones and their concerns regarding lack of funding for people with disabilities. Staff spoke of their dedication and commitment to the people NorthPointe supports and how lack of funding has resulted in hiring shortages. And lastly, a program participant shared that he was able to obtain his dream job with the support of NorthPointe’s customized employment services, but worries that his friends may not have the same opportunities if the funding shortage continues.NorthPointe’s CEO, Dina Donohue-Chase stated, “We are glad that Senator Bush was able to find time in her busy schedule to visit our organization, learn more about what we do and the challenges we face due to the budget stalemate.” She went on to say, “Senator Bush has proven to be a strong advocate for social services and understands their vital contribution to the community.”Established in 1953 as an organization of social good, NorthPointe Resources, Inc. is a premier provider of a full range of award-winning programs for people with disabilities and mental illness. Located in northern Illinois, NorthPointe serves Lake, Cook and McHenry counties, supporting approximately 500 people annually. To learn more please visit www.northpointeresources.orgNorthPointe Resources 3441 Sheridan Road Zion, Illinois 60099 8478721700

09-25-2017 | Arts & Culture
NorthPointe Resources
NorthPointe Celebrates Direct Support Professional Recognition Week
[ZION, IL] –From Sept. 10-16, NorthPointe joined in on the national celebration of Direct Support Professional (DSP) Recognition Week, honoring the tens of thousands of workers who enable individuals with intellectual and developmental disabilities to be healthy, safe, valued, and participating members of their communities. “Through their compassionate care, DSPs give life to the programs and services that are available at NorthPointe. It’s important for our employees to understand the
07-19-2017 | Associations & Organizations
NorthPointe Resources
NorthPointe Resources’ Annual Fundraiser - a “Bigger ‘n Better” Success! …
[ZION, IL] NorthPointe Resources held their annual fundraising event “Blues ‘N Brew” on Saturday, June 17 at Viper Alley in Lincolnshire, IL. “This new, larger venue was chosen because last year’s event sold out in 11 days,” stated Dina Donohue-Chase, NorthPointe’s CEO. This year’s theme was “Bigger ‘n Better,” and it was just that. Approximately 250 guests enjoyed live music performed by Lloyd Stephens and the Brothers, scintillating appetizers and
06-23-2017 | Politics, Law & Society
NorthPointe Resources
STATE SENATOR TERRY LINK TOURS NORTHPOINTE RESOURCES
[ZION, IL] Illinois State Senator Terry Link, from Illinois' 30th District, visited NorthPointe Resources on Tuesday, June 13, 2017. While visiting NorthPointe’s headquarters at The Killian Center located in Zion, the senator toured the facility and met with many of NorthPointe’s staff and program participants. Having visited the center previously, Link was interested in seeing changes that have been made in addition to gaining further insights regarding NorthPointe’s concerns and
05-02-2017 | Associations & Organizations
NorthPointe Resources
NorthPointe Resources Beautifies homes through generous donations from community …
Thanks to the help of community partners, NorthPointe Resources was able to update the common areas of the 17 community homes where they provide support services for people with developmental disabilities. “We rely on our community partner’s donations and grants to help us furnish our community homes as well as the Killian Center. We are fortunate to have wonderful partnerships with Penny Mustard, Upscale Rummage Sale, Crate and Barrel, and