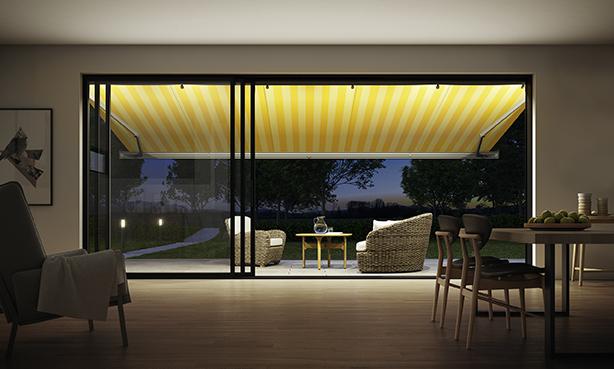 With the iF Design Award the cassette awning markilux 970 received the third design award.

Cassette awning markilux 970 now also awarded iF Design Award In autumn, last year, awning expert markilux already enjoyed the success of its new cassette awning, the markilux 970. Already in the first year it managed to receive two design awards. At the beginning of 2014 a third award followed: the internationally renowned iF Design Award. More than 5,000 registrations from 59 countries participated in the competition in 2016.According to Michael Gerling, technical manager of the awning specialist, high-quality awnings like the ones from the manufacturer markilux have already emerged from their own shadow and offer more than technology and functionality. They are design objects, the shape complexity of which can easily compete with other design products. This is proven with particular clarity by the latest model from markilux, the cassette awning 970. It received three design awards thanks to its clear design and purist shape. Recently it received the iF Design Award. Last autumn the company could already enjoy the German Design and Plux X Award.A very special award “The iF Design Award is always something special to us. It ranks among the most valued international awards”, says Gerling. The iF International Forum Design GmbH from Hannover describes itself as one of the oldest independent design institutions in the world. Already since the mid 1950s it has been setting high standards for aesthetic quality and both practical and efficient design. Therefore, the award is a global symbol for excellent design and function. Good cooperation bears fruit Professor Andreas Kramer from Bremen, who designed this and many other markilux awnings, can add the current award to his collection. Since 2001 it is the ninth award the product designer received together with markilux. Kramer, who teaches at the University of the Arts in Bremen appreciates this: “Almost 20 years of cooperation bear fruit. It is a joint success that drives us to continue on the same course”, explains Kramer Since 1998, the start of the creative partnership, the markilux 970 is the fifth awning model to receive the iF Design Award.Design is important as selling point The collecting of design awards, however, is not a goal in itself, explains Michael Gerling. “Even exquisite branded products do not sell by themselves. Nowadays, the end customer mainly purchases “appearance” apart from function and quality, for it also is its flagship.” Therefore, it is important for products more than ever before to look good and to document the same possibly with one or at best with several awards. At the same time, it is obviously a personal success and like a star in high-end gastronomy a motivation driver this direction should be followed in the future.For further information, please visit: markilux.commarkilux is one of the market leaders in the area of awning production in Germany and one business domain of the Schmitz-Werke GmbH + Co. KG in the Westphalian Emsdetten. Since 1972 the family enterprise has been producing awnings for terraces, conservatories and windows. The high-quality products are distributed by professional partners in Germany and abroad. About 1,000 selected companies assure the high qualitative standards during the assembly of the awnings. Modern panel blinds, roller blinds, seating solutions and household accessories for inside and out, which have been tailored to suit the world of awnings, also belongs to the markilux portfolio. The basic principle of the enterprise is: „There is nothing that cannot be improved“.conzept3 An der Alten Ziegelei 34 D-48157 Münster Fon: +49 (0) 251-1347740 Fax: 49 (0) 251-1347738 info@conzept3.de www.conzept3.de

11-30-2020 | Industry, Real Estate & Constr …
Markilux
A solar protection fabric offering new high-tech protection
The fabric "sunvas perla FR" by markilux has been made waterproof for purpose by means of its special coating and - from now on - is also highly flame retardant. "sunvas perla FR" is a solar protection fabric produced by the awning manufacturer markilux, which has recently been made not only waterproof (for purpose) but also highly flame retardant in compliance with the B1 fire prevention class. This results from the
09-29-2020 | Fashion, Lifestyle, Trends
Markilux
Keeping the heat out
Vertical roller blinds make sure the house stays cool and save energy at the same time. Climate change has been blessing / cursing us with hot summers for a few years already. To keep temperatures bearable in house, air conditioning units and fans are being used more and more. However, these tend to use a lot of power. Consequently it makes more sense to shade large vertical areas of glass with
08-25-2020 | Fashion, Lifestyle, Trends
Markilux
More time outdoors
Awnings make outdoor living possible in almost any weather Anyone buying a quality awning today usually gets more than just sun protection. Because there are special extras such as matching side screens and vertical blinds. To a certain extent these additional features turn the products into general all-round weather protection. Even when the sun isn't shining, you can still sit back and relax outside. Awnings provide shade. They provide protection against warmth
07-06-2020 | Fashion, Lifestyle, Trends
Markilux
Fast track to your dream awning
The markilux configurator facilitates product selection In the search for an awning, useful online tools can be very helpful: for example the configurator provided by markilux. It will help you to quickly find exactly the right sun protection. Anyone planning to buy an awning for a patio or balcony will be taken with this practical tool: the markilux product configurator. This recently relaunched online tool is very easy to use. It invites

05-13-2020 | Industry, Real Estate & Constr …
Aspect Designs
Home Design Sydney: Basic Interior Design Principles
We can all agree that decorating your home can be exciting, but also extremely challenging. If you have an eye for design you are very lucky but most people don't, that's why it is best to leave it to the professionals to give you guidance and ideas. When you decorate your home, it's important to understand the basic principles of interior design, so you can craft the home you have always
12-05-2018 | Business, Economy, Finances, B …
Panache Exhibitions Pvt Ltd
Exhibition Design
Panache Exhibitions Pvt Ltd: Exhibition Design explores the role of the exhibition designer as a creative practitioner, and seeks to communicate a better. G-66, 2nd Floor, Near Kalindi Kunj, Shaheen Bagh, New Delhi-110025 India
05-28-2018 | IT, New Media & Software
Webski Solutions
Web Design Trends: Flat Design vs Flat Design 2.0
Flat design is a web design trend standing for minimalism and cleanness in the website design industry. This trend has become popular since 2012, replacing the Skeuomorphism trend – the most popular trend until then. Unlike skeuomorphism, which is characterized by real-life 3D objects and shiny buttons, flat design is recognizable for its flat shapes and objects; not generating depth, dimension or any effects, such as drop shadows, highlights and
03-07-2012 | Health & Medicine
Otto Bock HealthCare GmbH
Outstanding Design
Four iF awards for Ottobock Products With the Triton prosthetic foot, the 3R93 therapy knee joint and the Genu Sensa knee support, no less than three Ottobock products have been recognised with the iF product design award 2012. Carbon fibre woven prepreg, a high-performance fibre composite material developed by Ottobock, also received the iF material design award. The iF product design award is one of the most renowned design competitions worldwide. It
02-17-2012 | Business, Economy, Finances, B …
Gower Publishing Ltd
Universal Design
Universal Design offers every organization, whether a provider of services or of products, a clear understanding of the role and value of Design for All/Universal Design. It provides a model for assessing current design practices and making the changes that will make a product or service accessible to all potential customers to create a better consumer-oriented experience. Each chapter contains examples and case studies plus a set of tools to
02-08-2012 | Science & Education
Gower Publishing Ltd
Design Education
Design Education encapsulates and analyses the research findings facilitated by the UK based Centre for Excellence in Teaching and Learning through Design. By examining over 40 projects, ranging in focus from design students' use of archives and museum collections to the potential of specific technologies to enhance teaching and learning, Design Education explores aspects of learning and teaching in higher education design subjects, from architecture and 3D design through to
Comments about openPR
I can't but agree to the positive statements about your portal: easy to use, clear layout, very good search function, and quick editing!
Jens O'Brien, Borgmeier Media Communication