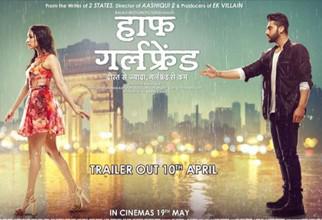 While the first motion poster of Arjun Kapoor and Shraddha Kapoor starrer 'Half Girlfriend' showed their complicated relationship, the second motion poster has made its way to the internet. The official Facebook page of Zee Music Company shared the motion poster on their Facebook wall.The motion poster starts with a transition from the cover of the original book to the film's poster. With the backdrop of India Gate, drizzling raindrops and mellow music, Shraddha and Arjun seems to be parting ways from each other. The motion poster also announces the release date of the trailer which is April 10, 2017.'Half Girlfriend' is the story of Madhav Jha and Riya Somani played by Arjun and Shraddha respectively based on Chetan Bhagat's novel with the same name. The film is also the first one to be associated with the National Basketball Association. Directed by Mohit Suri, the film will hit the theatres on May 19, 2017.Watch the motion poster here.FRIDAYMOVIEZ.COM is a chic movie portal bringing you the best of Bollywood and Hollywood in terms of the up-to-the-minute news, movie reviews and trailers, celebrity images, videos and profiles, exclusive inside information comprising original features, live event coverage, red carpet events, comprehensive archives and more.#G-1, New Udyog Mandir 2 Moghul Lane, Mahim (W) Mumbai 400016 India

04-01-2019 | Fashion, Lifestyle, Trends
Neelu Taneja Makeover
Kareena Kapoor Khan awarded International Quality Awards to Neelu Taneja
On March 15, 2019, Bollywood’s acclaimed actress Kareena Kapoor Khan awarded Brands Impact’s International Quality Awards (IQA) to the best bridal makeup artist- Neelu Taneja. To encourage quality improvements in both manufacturing and service sectors in India, Brands Impact a branding company has set up The International Quality Awards (IQA). IQA winners have made considerable accomplishments in carrying out client satisfaction through their devotion to delivering quality products and services,
09-18-2018 | Advertising, Media Consulting, …
Square Group
Industry Expert – Navneet Kapoor To Become First Indian, Awarded The Doctorate …
India is one of the fastest growing advertisement markets in Asia and a large market for travel and tourism. The launch of several branding and marketing initiatives has provided a focused impetus to growth in the tourism sector. Adding another feather to India’s pride is Navneet Kapoor, Founder & CEO - Square Brand Communication Group. He has been awarded the Doctorate of Philosophy in Brand Management & Communication and Specialisation
11-30-2017 | Fashion, Lifestyle, Trends
not a pr agency
Vandana Kapoor, Contestant from Delhi won Mrs India Queen 2017 in classic Catego …
RJ fashion fiesta, a platform to celebrate womanhood organised Mrs India Queen 2017, at Piccadilly, Janakpuri, where married participants from across the country showcased their skills, beauty and brain in front of the esteemed jury. “Mrs.Vandana Kapoor, contestant from Pitampura, Delhi was adjudged the winner of the classic category with unanimous choice. The pageant was a stepping stone for women empowerment and includes self-motivation and self-defence training for the contestants. The
03-30-2017 | Leisure, Entertainment, Miscel …
FridayMoviez
Regal Cinema to tribute Raj Kapoor before its final shut-down
Situated in the heart of the capital, Delhi's Regal cinema is all set to shut down and will be renovated into a multiplex. Regal, a single screen theatre of almost 8 decades standing tall in Connaught Place will also pay a tribute to the late superstar Raj Kapoor by showcasing his two movies 'Mera Naam Joker' and 'Sangam' before it's final shut-down. One of the owners of the cinema hall were
12-21-2016 | Leisure, Entertainment, Miscel …
FridayMoviez
Kareena Kapoor Khan Blessed With A Baby Boy
The big day has finally arrived. The news which was awaited by the Kapoors as well as the Khans has knocked the door. The new mommy in tinsel town Kareena Kapoor Khan is blessed with a baby boy. She tied the knot with Saif Ali Khan on October 16, 2012 and this is their first child together. Baby was born at 7:30 am in Breach Candy hospital in Mumbai. This news
12-01-2016 | Leisure, Entertainment, Miscel …
FridayMoviez
Kareena Kapoor Khan Graces The December Issue Of Grazia
We are in the last month of the year 2016 and we just cannot wait for the next year to come. Not to forget the year 2016 has given us some sweet as well a bitter surprises. Talking about the bitter part first we recently bid goodbye to the old currency notes of denomination of Rs. 500 and Rs. 1000. The sweet news was that the Begum of Nawab Saif
Comments about openPR
OpenPR ist the nicest and most clearly laid out PR platform I have seen to this day. The press releases are displayed very nicely and clearly and without any unnecessary frills. The updates are fast and the finished release looks appealing and is clearly legible. Even with 16 years of experience one discovers new things from time to time. Congratulations!
Gabriele Ketterl, Director Marketing & PR, Menads