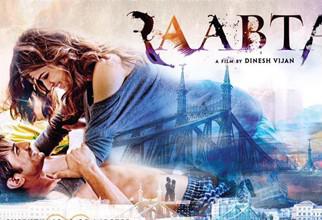 A much has been talked about Sushant Singh Rajput and Kriti Sanon's chemistry which heated up while shooting for their upcoming film 'Raabta.' The trailer for the much awaited film is finally out and is looking every bit promising. Kriti shared the trailer on her Twitter handle by tweeting, "A film thats too close to my heart..thrilled to share with you all..❤️❤️ Here's the trailer: http://bit.ly/Raabta Hope u guys like it.. 😁."The trailer starts with a cute meeting between Sushant Singh Rajput and Kriti Sanon which later turns into a super cute and cheesy romance. The much in love couple spend some romantic and lovey dovey moments together, indulge in some steamy kisses and hugs and cutesy conversations. But those who thought that 'Raabta' is such a film filled with romance, then you might be wrong. Because in the midst of their romance Jim Sarbh marks his entry as the villain and there starts the game of real love.While Sushant and Kriti are connected from a past story of a king and a queen, Jim plays the baddie in the past era too. The man who wants the queen in every possible way. The trio look spectacular in the tribal avatar.Well what happens to the story of king and the queen, there lies the question for which you have to wait the film to hit the theatres. The trailer takes you to a journey of the past and the present, but ends on a note where your excitement level is already boosted and you want to see more. Kriti Sanon enjoys good screen presence and Sushant and Jim are commendable as always.Directed by Dinesh Vijan, the film releases on June 9, 2017.Watch the trailer here.FRIDAYMOVIEZ.COM is a chic movie portal bringing you the best of Bollywood and Hollywood in terms of the up-to-the-minute news, movie reviews and trailers, celebrity images, videos and profiles, exclusive inside information comprising original features, live event coverage, red carpet events, comprehensive archives and more.#G-1, New Udyog Mandir 2 Moghul Lane, Mahim (W) Mumbai 400016 India

04-12-2017 | Leisure, Entertainment, Miscel …
FridayMoviez
Here is the monsoon song 'Baarish' from 'Half Girlfriend'
Rains have always played a significant role in Bollywood movies. Include one romantic rain song and your film is hit. While we already have some of the most romantic rain numbers, the newest addition to it is the 'Baarish' song from 'Half Girlfriend.' The first song is finally out and Shraddha Kapoor shared it on her Twitter handle. She tweeted, "Some songs make you fall in love 😍Here it is
04-11-2017 | Industry, Real Estate & Constr …
FridayMoviez
Anushka Sharma receives a legal notice from BMC
Celebrities entering into legal mess with the BMC officials is not a new thing now. After Kapil Sharma and Arjun Kapoor were accused of illegal construction in their respective apartments, it is now Anushka Sharma who has landed into such trouble. BMC has issued a legal notice to the actress for installing a electric junction box on her floor which is illegal. A neighbour filed a complaint against her after
04-07-2017 | Leisure, Entertainment, Miscel …
FridayMoviez
Check out Noor's emotional side in 'Hai Zaroori' track
Sonakshi Sinha as 'Noor' gave a sneak peek into her messy life while juggling between office and her home in the trailer and the songs which are released so far. Now another song is released from the film titled as 'Hai Zaroori.' Sonakshi shared the song on her Twitter handle and captioned it as, "Heres the soulful #HaiZaroori by @AmaalMallik sung beautifully by @PrakritiKakar and written by @manojmuntashir." The song shows
04-07-2017 | Leisure, Entertainment, Miscel …
FridayMoviez
Chapter 4 of 'Meri Pyaari Bindu'
While the first three chapters of Ayushmann Khurrana and Parineeti Chopra starrer 'Meri Pyari Bindu' tickled our funny bones, the fourth chapter has already made its way. Parineeti shared it on her Twitter handle by tweeting, "So easy to scandalise Abhi's MOM!!! Hahhahahaha here is Chapter 4 :) Bindu v/s Ma 😎😎😎 #MeriPyaariBindu." The chapter 4 shows Tom and Jerry equation between Bindu and Abhimanyu's mom. Bindu, who is Abhi's neighbour